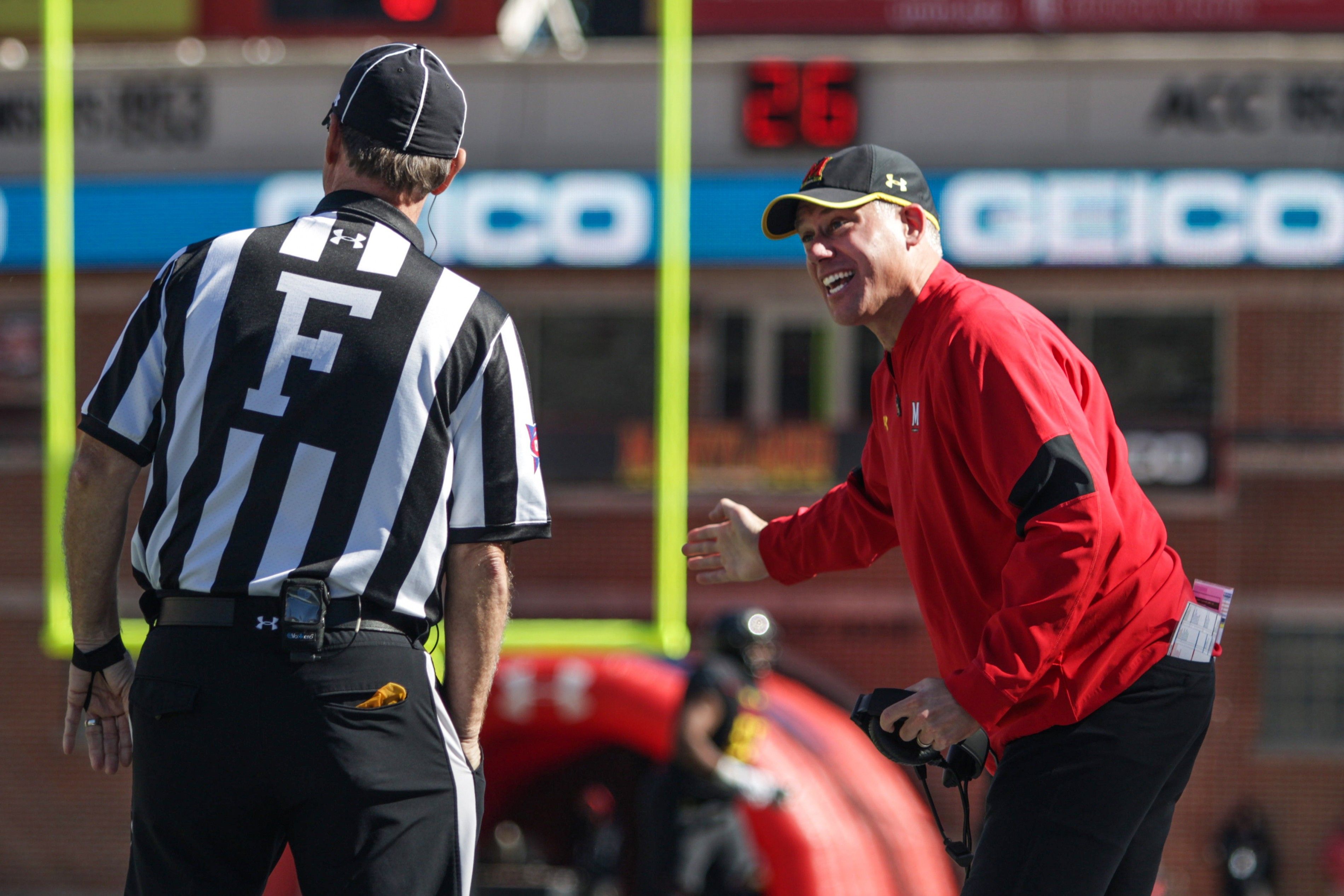 Coach DJ Durkin discusses a penalty with the referee during Maryland football’s 31-10 loss against Minnesota at Maryland Stadium on Oct. 15, 2016. (Matt Regan/The Diamondback)

DJ Durkin’s passion and self-declared commitment to his players’ well-being won over investigators and the Board of Regents and led to him being reinstated as Maryland head coach, despite numerous player complaints that he had failed to adequately care for them.

“We believe that [Durkin] is a good man and a good coach who is devoted to the wellbeing of the student-athletes under his charge,” Regents Chair James Brady said at a press conference in Baltimore on Tuesday. “He’s also at the beginning of his coaching career with a great deal of promise and much to learn. We believe he deserves that opportunity.”

Tuesday’s press conference and subsequent statements did little to dispel reports that university President Wallace Loh has reservations about Durkin’s return. Before announcing he would retire in June, Loh commended the board for recommending that athletic director Damon Evans remain with the university, but displayed no such elation regarding Durkin.

When asked whether his retirement was due to pressure from the board and disagreements about Durkin’s return, Loh kept his answer brief: “I have accepted the recommendations in full of the Board of Regents.”

After the press conference, several players voiced disapproval of the board’s decision. Offensive lineman Ellis McKennie tweeted that the board lacked courage.

Every Saturday my teammates and I have to kneel before the memorial of our fallen teammate. Yet a group of people do not have the courage to hold anyone accountable for his death. If only they could have the courage that Jordan had. It’s never the wrong time to do what’s right. pic.twitter.com/AaZVmLGTtS

Brady largely brushed off player’s complaints about Durkin and said he was unfairly blamed for broader dysfunction in the athletic department. Brady also said Durkin accepted his role in allowing strength and conditioning coach Rick Court to abuse players, despite Durkin having told investigators he did not have responsibility to supervise Court.

That, too, Brady attributed to “confusion.”

In the full report released Monday, on both the 2017 and 2018 football organizational charts, Durkin’s name resides directly above Court’s. Brady, though, said “you happened to see one of them. There were many. And it made for a very confusion [sic] situation in terms of who was responsible for what.”

Brady said Durkin impressed the 17-member Board of Regents and the eight-person task force during their meetings with him. The embattled coach convinced both groups that he should remain at his post, despite the evidence mounted against him — such as a 2016 anonymous email from a parent warning of abuse in the program, and player and coach testimony that Durkin and Court were “the same person.”

Throughout the report, there were disagreements and sources of tension between Evans and Durkin. They offered different answers about whom Court reported to, how often Evans was around the team personally and their communication regarding Durkin being placed on leave in August.

Durkin was frustrated with the lack of support and oversight from Evans and his predecessor, Kevin Anderson, as he went 10-15 in his first two seasons.

“The two of them will have to resolve that,” Brady said. “There’s a lot of stuff out there that needs to get resolved. They all understand what has to be done. But at the end of the day, the only answer that’s acceptable is that we are going to do everything to make this work.”

McNair’s death in June immediately cast a pall over the program, and even with the little information the university released at the time, it was clear that Durkin had an uncertain future.

Four months, two external investigations and innumerable hours of discussion and speculation later, the Board of Regents elected to back a head coach who has lost parts of the locker room and fanbase. And when Brady announced in a statement Thursday he was resigning from the Board, he acknowledged the many groups whose outcry at his recommendation led to Loh disobeying it.

“I respect the many people – including elected leaders, members of the public and members of the board – who disagreed with the recommendations a majority of this board ultimately made,” Brady said. “These were difficult decisions, based on information included in reports stemming from two investigations and a great deal of thought and deliberation.”