UMD students designed a solar-powered house. It’s been sitting unbuilt for a year. 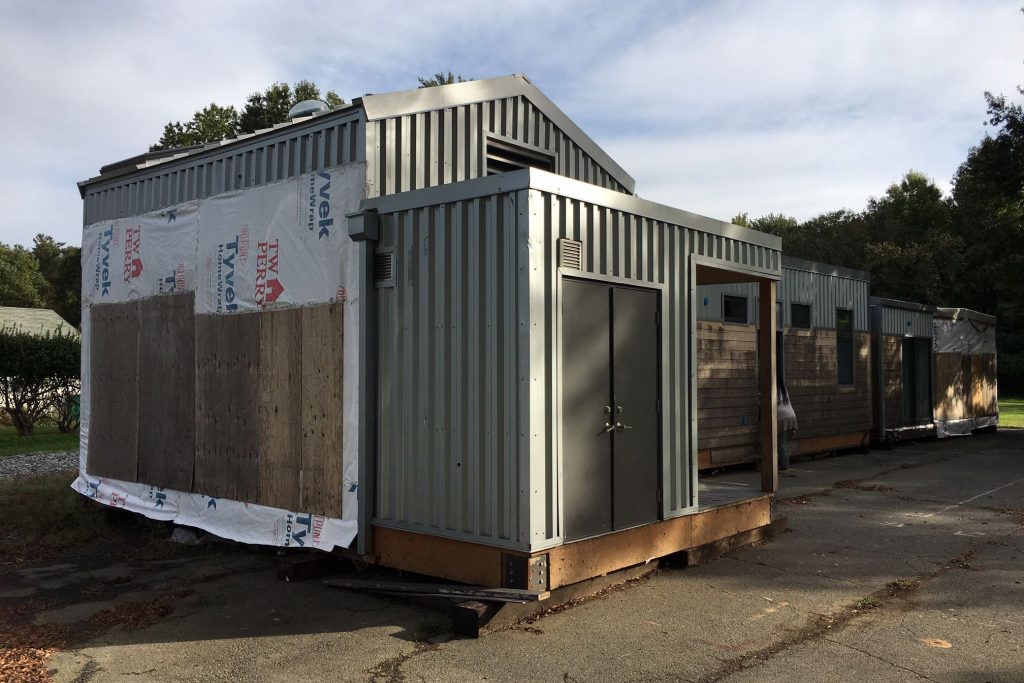 For a while, it seemed no one was sure what was going on with the reACT House.

Last fall, the project designed by an interdisciplinary team of students won second place in the Solar Decathlon, an international university competition focused on sustainable building.

After the competition in Denver, the reACT House was shipped back to College Park. The students who built it hoped to showcase their accomplishments and use the house as a template for other sustainable building projects, but since the competition, it’s been left unassembled on a plot of land near University Boulevard and Metzerott Road north of Xfinity Center.

A team of architecture and engineering students designed reACT House to be an exemplar of sustainable building. Its insulated walls reduced the need for heating and air conditioning, and its overall design was meant to be as energy- and resource-efficient as possible.

Architecture professor emeritus Ralph Bennett described reACT’s current situation as one in which Donald Linebaugh and Darryll Pines — the respective deans from the architecture and engineering schools — were working together and lobbying the administration to formulate definitive plans for the house.

A year after its return to College Park, however, some involved with the project are worried about the house’s longevity in its current condition.

Alla Elmahadi, a graduate student in architecture and real estate development, was the lead construction manager for reACT House during its development. She expressed concern about whether the house would last another year as is, and noted that she and fellow architecture graduate student Malik Johnson-Williams are among the last enrolled students who know how to assemble it.

“[We’re] worried that the house will not be put back together while [Johnson-Williams and I] are here,” she said. “There’s not really a contingency plan in place for after we graduate.”

Elmahadi, who had been inside the house recently, said it had “a little bit of mold,” and would likely need some of its kitchen fixtures replaced, but overall described its current condition as “not terrible.”

Still, she was concerned about ongoing deterioration as it stays disassembled.

“The longer it stays the way it is, the more damage will be incurred,” she said. “I’m sure people want to see this put back together.”

Reassembling the house will require funding. Garth Rockcastle, the co-principal investigator on the project, said the team is looking for $75,000 to $100,000 to “rebuild and establish a foundation.”

Rockcastle said David Cronrath, the former architecture dean who now serves as planning and special projects associate provost, was looking into a new location for the house. But Cronrath wrote in an email that he knew “very little about the future of reACT House,” and that his involvement has largely been limited to “being a fan of the project.”

Linebaugh, who took over as interim dean in June, said he’s not up to speed on where developments on reACT House have led prior to his tenure. He intends to meet with Pines to formulate a concrete plan, then bring that plan to the provost.

Pines did not respond to multiple requests for comment.

Despite the confusion, Linebaugh expressed confidence in the process’ ability to move forward.

“No one [from the administration] is stonewalling us,” he said.

The previous architecture dean, Sonia Hirt, would have been involved in discussions about reACT following its return to campus. But after her departure from the university earlier this year, progress on the project halted.

“In many ways, because I’m new to this, we’re at the very beginning of the process,” Linebaugh said. “I believe [the university has] made a commitment on some level of a place [for the house] and I’d like to get that moving.”

Some of the house’s sustainable and energy-efficient technologies are in the process of finding channels for mass production in Europe, Rockcastle said.

In the meantime, reACT will stay in its current location on the north end of campus. Patricia Cossard, a co-principal investigator and sponsor on the project, said this location is problematic because it isn’t developed for electricity and plumbing. Plus, if the area floods, there are no planning countermeasures in place to protect the house from damage.

“Where it’s sitting now is where it was built,” said Cossard, an art/sociology librarian. “It’s disheartening.”