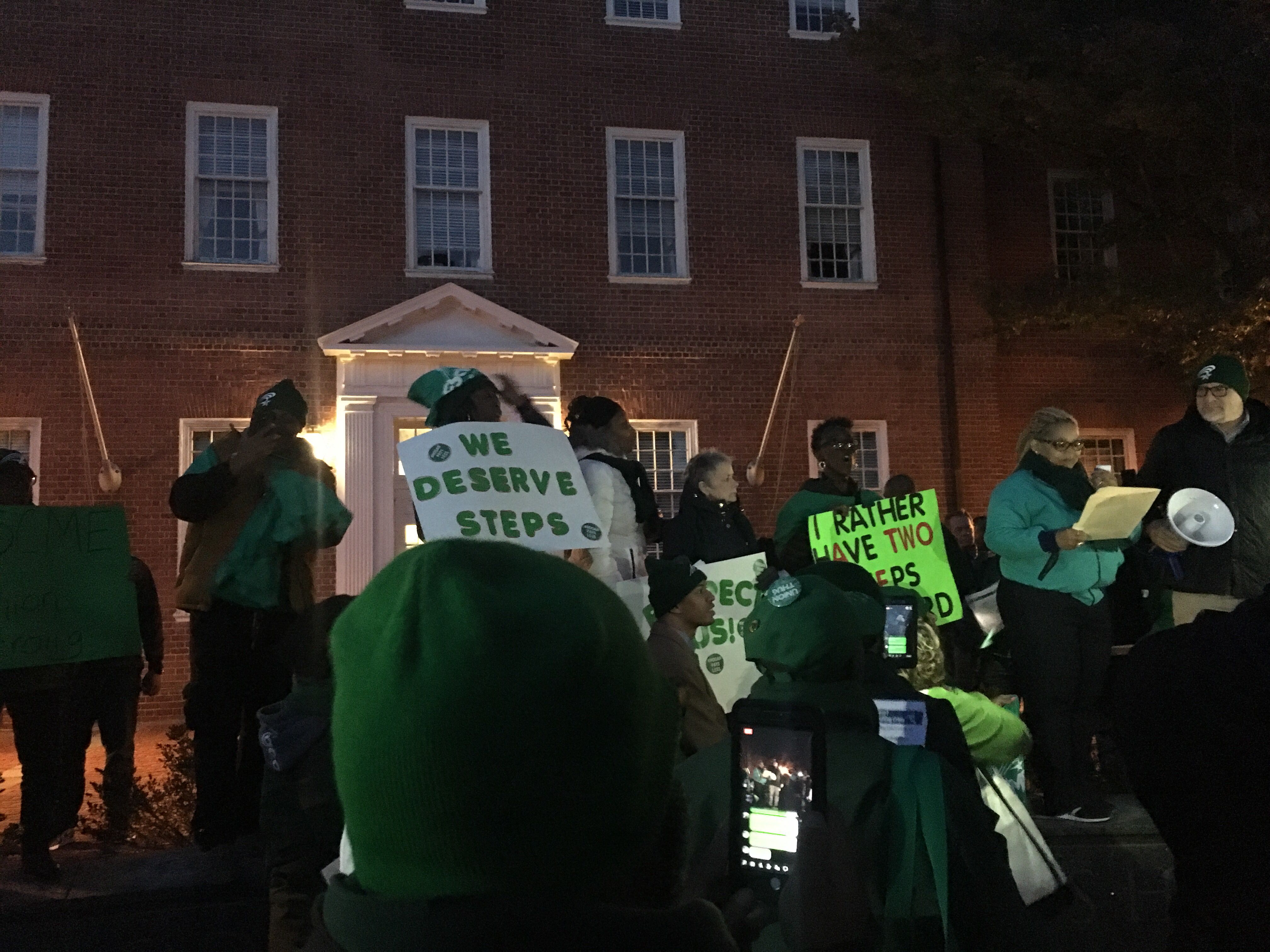 A chant swelled up among the hundreds of Maryland employees who crowded in front of the Governor’s Mansion in Annapolis on Wednesday evening, bundled up against the cold and hoisting signs made from poster board:

It’s been four years since state employees last saw their salaries adjusted to account for an increase in living costs — too long, said Jeff Fiory, treasurer for the local chapter of the union representing University of Maryland workers.

“That’s why there are so many people here today,” Fiory said, standing in a sea of bright green shirts: the color for the American Federation of State, County and Municipal Employees.

Fiory, who works for this university’s Department of Transportation Services, was one of eight workers from the campus who carpooled to Annapolis to rally for higher salaries for the upcoming year.

Since September, AFSCME representatives have been at the bargaining table with state officials, working to negotiate the raises that state employees will receive next year.

In January, Hogan promised a 2 percent cost-of-living adjustment to all state workers, starting in January 2019. If the state were to end the fiscal year with a $75 million surplus, Hogan promised he’d tack on a half percent merit increase and a one-time $500 bonus for state workers in April 2019.

The surplus was more than $500 million, so the AFSCME is pushing for more, said Todd Holden, a member of the local chapter’s executive board.But before the union is able to start bargaining for another raise, AFSCME must agree with the applicable state department heads on ground rules to guide the negotiation.

This hasn’t happened yet, said Holden, who sat in on the most recent bargaining session on Oct. 12. He added that a major sticking point in these talks is that the state doesn’t want union members to speak to the media or state legislators about the contents of the negotiation while it is in progress.

“The union has a right — and, in some cases, it has an obligation — to communicate to the public what state workers are facing,” Holden said.

Another reason union members gathered in Annapolis on Wednesday was to do just that: to raise awareness for staff shortages faced by state departments across Maryland. Workers like Rownite Stevens, a correctional officer sergeant at the Eastern Correctional Institution in Somerset County, shared the challenges that these shortages pose to them and their colleagues.

Moran’s remarks triggered chants of “Do your job!” and “Do the right thing!” from the gathered workers.

Later, union members marched the cobblestone street surrounding the Governor’s Mansion, waving green glow sticks. When they came to a stop, Moran stood in the middle of the crowd as some workers tapped out spirited rhythms on snare drums. He urged employees to take the energy they brought to the rally that night back to their workplaces.