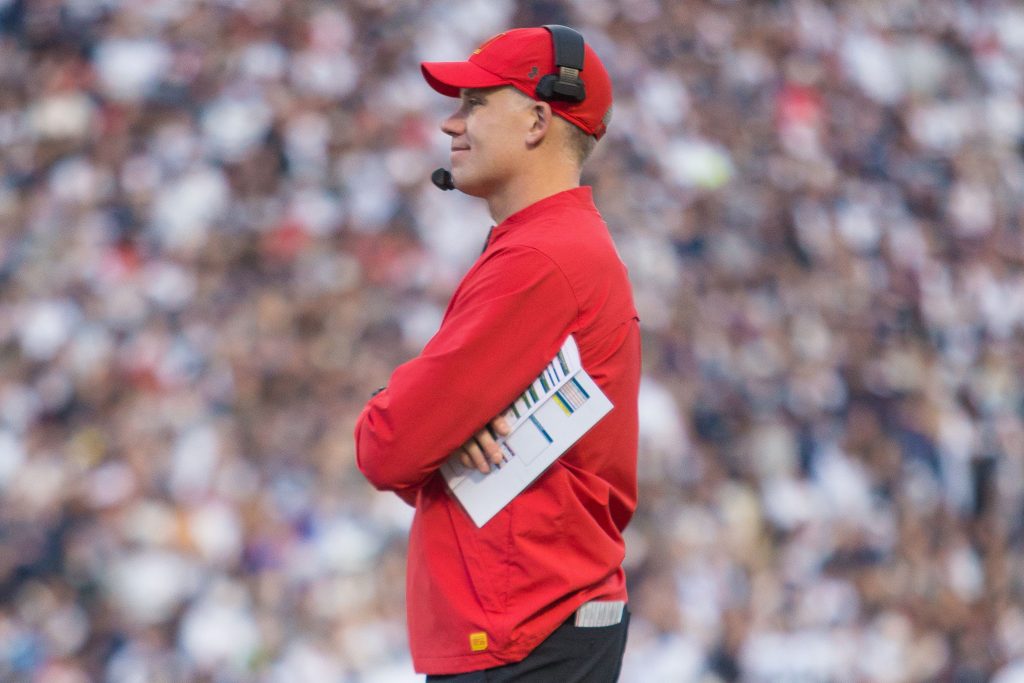 The external report expected to decide DJ Durkin’s fate in College Park portrays him as a victim of broad unrest in the athletic department that left him unprepared to lead a college football program for the first time. But the commission denies his claim that he was not responsible for overseeing strength and conditioning coach Rick Court, who Durkin maintains was not abusive despite reams of evidence and testimony to the contrary.

There was a consensus around the program that Durkin’s so-called “open door policy” was severely undermined by his tight relationship with Court, who was the source of the majority of the players’ complaints. A former assistant coach described Durkin and Court as being “the same person,” and Durkin denies many of the allegations from players or parents that they had attempted to complain to him about the program environment.

“The Maryland football team did not have a ‘toxic culture,’” the report reads, “but it did have a culture where problems festered because too many players feared speaking out.”

Quotes from players and coaches interviewed by the eight-person commission tasked with investigating the program under Durkin mostly back up the story that he was struggling in his first years at Maryland, and at points lacked compassion for his players.

Early in his time at Maryland, Durkin grew frustrated with the lack of help he was receiving as a first-time head coach from then-athletic director Kevin Anderson and then-team liaison Damon Evans.

And while Durkin successfully created new dietary plans and adjusted pain medication policies to reduce the chance of addiction, he was irked by failed attempts to get a psychologist dedicated solely to his team, have a team physician present at every practice and transform the school’s marijuana policy from punitive to therapeutic.

Durkin said he had trouble navigating a university bureaucracy that was more complicated than the previous schools he worked at. Those bureaucratic issues played a major role in one of the most significant topics of the report: who supervised Court.

Court’s contract states he reported to Durkin, but there is massive and widespread confusion regarding the reality. Evans and deputy athletic director Colleen Sorem say Court did report to Durkin, while Durkin and Anderson say he reported to head of sports performance David Klossner, who denies having held that responsibility.

Durkin uses that chaos as cover to say that he did not have responsibility to police Court. The commission didn’t buy this claim, noting Durkin and Court’s tight-knit relationship and the general wisdom that a head coach leads the program.

“It is a head coach’s responsibility to establish and maintain a healthy, positive environment for his players,” the report reads, “and to hire coaches and staff who support these efforts.”

And while a December 2016 anonymous email never reached Durkin due to the athletic department’s “abject failure” to take it seriously, the report covers numerous other instances of coaches, players and parents claiming to have complained to Durkin. In most instances, he either denied or attempted to justify them to the commission:

An assistant coach saying he told Durkin that Court was out of line? Never happened. Court throwing a player’s food against the wall? The team laughed about it. Former offensive lineman E.J. Donahue telling Durkin the program fat-shamed him and made him depressed? Well, Donahue didn’t mention the fat-shaming.

During a weight-training session in January 2016, two players allege that Court approached another player from behind and pressed the lateral muscle pulldown machine down into his neck, choking him. “Come, on motherfucker,” the players reported Court said.

The player’s mother learned of the incident through her son in spring 2018, and his parents told the task force that Durkin “acknowledged the incident, believed it was wrong, but indicated ‘no charges would be pressed.’”

Durkin denied being in the weight room at the time and claimed he learned of the incident only after Jordan McNair’s death in June. He had a similar timeline regarding his knowledge of Court throwing candy at an overweight player in the weight room, though some players said he was present for the incident.

Durkin also categorically denied Anderson and Evans’ claims that they made weekly appearances around his team. The commission’s review of the trio’s calendars supported the position that they were largely absent.

The disputes between Durkin and Evans extend to his administrative leave. In a letter from Evans to Durkin, the athletic director says Durkin was “provided an opportunity” to discuss the decision prior to it being carried out, but Durkin says he never received that opportunity.

Evans told Durkin at the time that the university hadn’t found he’d done anything inappropriate — a position Evans still maintains, according to the report. The report points to the lack of a “uniform rejection” of Durkin’s coaching staff as proof that the culture fell short of the “toxic” allegations.

Durkin received written support from 19 players and 14 parents of players over the summer, as well as seven former players and three high school coaches.

“I’m proud to be able to play with him and proud to call him coach,” a current player told investigators. “I feel the same towards the staff.”

But the majority of the comments presented in the report show some reservations about Durkin. And in a survey in September, players gave him low rankings when assessing his effectiveness as a coach.

“He needs to put himself more into the position of the kids and handle them more as if they were his own kids,” one current player said.

It was Durkin’s family that especially impressed Anderson during the hiring process. He noted the unity between Durkin and his wife, Sarah, who was “as invested in the development of student-athletes as her husband.”

Less than two years after hiring Durkin, Anderson was ousted after mishandling a sexual misconduct allegation against two football players. While Durkin was also involved, Loh and the commission found him less culpable, and Loh described him as a “babe in the woods” regarding the Title IX investigation.

It was a light-hearted jab at his relatively new head coach, but it may not sit well with Durkin, considering he already felt shortchanged by the administration. Perhaps more than anything, it offers another hint at what Durkin’s inability or refusal to control Court showed: He was floundering as Maryland’s new head coach.

“Great when getting one on one coaching,” a current player said. “When it comes to being a head coach, he does not know how to manage his [players’] health and well-being.”