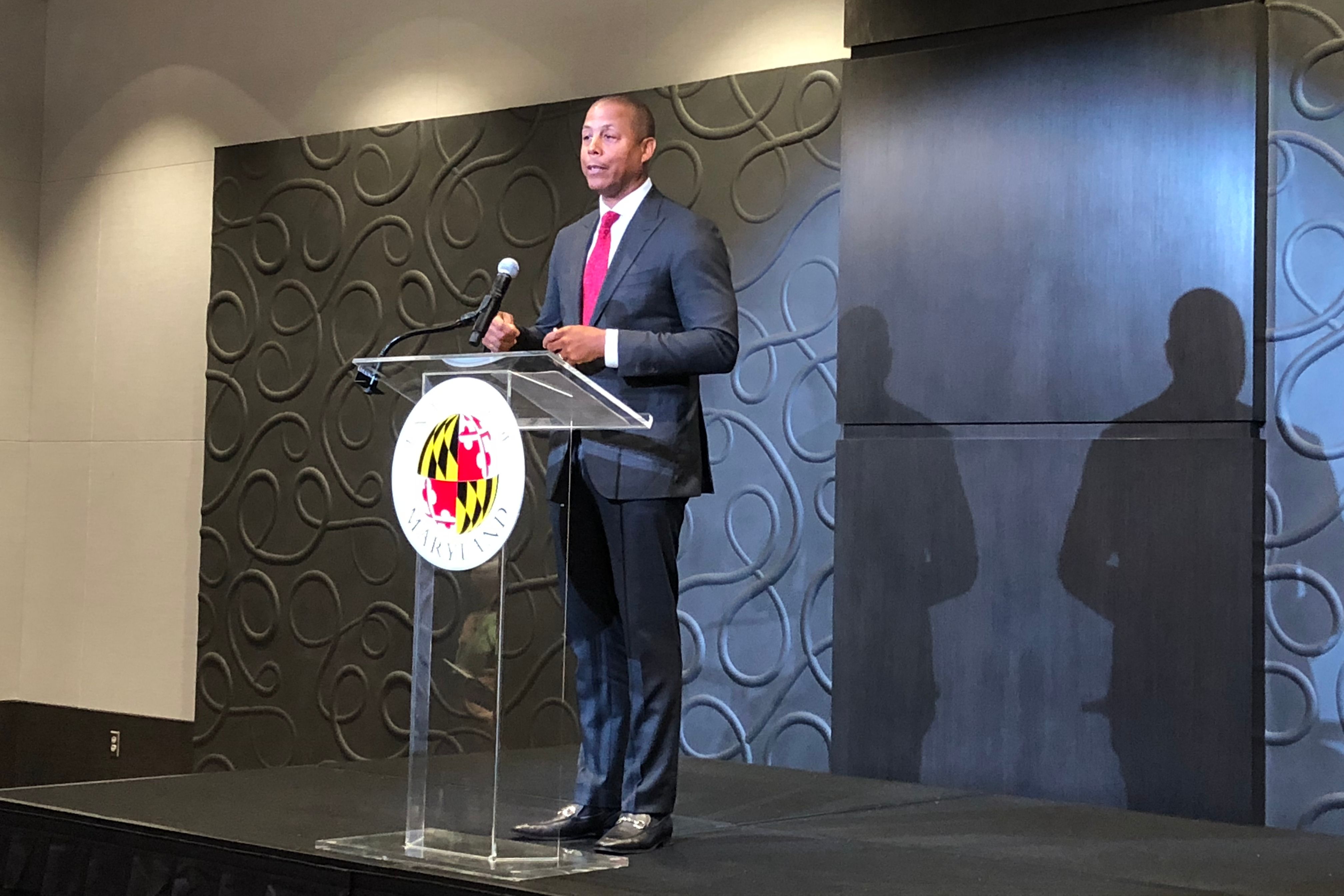 Athletic director Damon Evans speaks at a press conference in the ballroom at The Hotel at the University of Maryland on Aug. 14, 2018. (Andy Kostka/For The Diamondback)

A rift between Damon Evans and other officials led to a period of “chaos” in the University of Maryland’s athletic department and left much of the football program essentially unsupervised, leading to some of the abusive tactics in place among the football staff, according to the results of an external investigation.

Virtually every statement Evans made about his time working alongside Anderson — regarding oversight of the football program, his role in Anderson’s departure, the handling of sexual assault allegations against players, and others — was contradicted by Anderson.

By the time the university hired DJ Durkin as its football coach in December 2015, the athletic department was in complete disarray as it attempted to rise to the level of the Big Ten. Problems only increased over the following years, and following a messy transition, Evans took over a department low on morale and lacking clear reporting lines and positional responsibilities.

The schism between Evans and Anderson began in 2015-16, and over the following year, Anderson began freezing Evans out from his responsibilities. Anderson suspected Evans “was trying to undermine [him] and take his job,” he told university Assistant Vice President of Human Resources Jewel Washington at the time. Anderson also claimed Evans was bypassing him and meeting with Loh regarding athletics matters and the negotiation of Anderson’s contract.

When talking to the committee, Evans and Loh denied meeting to discuss anything beyond “general athletics matters.”

Meanwhile, neither Anderson nor Evans (as team liaison or athletic director) offered much in-person supervision to Durkin early in his time at Maryland, an unusual lack of contact compared to other Power 5 officials, according to the commission’s research and interviews.

Evans, Anderson and Durkin offer differing perspectives on the oversight provided. Evans said he visited the team once or twice a week and established strong enough connections with the team that four assistant coaches leaving the program visited him — unprompted — to give feedback.

But after examining the calendars of all three, the commission agreed with Durkin’s assessment of the supervision lacking. Items marked as “weekly meetings” did not take place every week, and meetings on Evans’ and Anderson’s calendars were “sporadic,” the report said.

Evans failed to recognize early warnings of discontent on the team, the report said. Evans claims to not remember an administrator relaying a player’s complaint that a strength and conditioning coach’s language made him feel “less than human.” Nor does Evans remember the anonymous email sent in December 2016 alleging abuse, despite Anderson forwarding him the email and claiming to have had a discussion with him about it.

It was hardly uncharacteristic of the department at the time.

In a survey completed in 2017, Washington stated that “there is no structure” in Maryland’s athletic department, which “is not normal.”

For instance, Evans didn’t know of the extensive plan — drafted by Anderson and head of sports performance David Klossner — to outsource the sports medicine department to the University of Maryland medical school in Baltimore until after it was sent to Loh’s office, despite Klossner reporting to Evans.

With Anderson freezing Evans out of communication and responsibilities — something several of Anderson’s subordinates said he did after losing trust with them — Loh invited both of them to his house in summer 2017 to clarify their job roles and try to amend the fracturing department. Anderson would serve on an external role and Evans would oversee internal operations.

Yet Anderson didn’t follow those delegations, which ended up costing him his job. When Anderson, Evans and other high-level staffers met regarding two football players accused of sexual misconduct, Evans advised Anderson to let the investigation run its course without intervening, according to multiple people at the meeting.

Anderson “vigorously denies” that account, as well as Evans’ claims that Anderson subsequently told him to facilitate payment for the players’ legal representation as soon as possible, claiming that Evans brought him an invoice unprompted.

Regardless, the proper policy regarding representation of athletes was not followed, which caused Loh to view the relationship with Anderson as untenable and paved the way for Evans to take over as athletic director.

At Evans’ introductory press conference in June, Loh commended his rise at Maryland as “a very typical human story of fall and redemption.” Evans’ stint as an athletic director at Georgia ended in 2010 following a DUI arrest in which a woman who was not his wife was in the passenger seat and a pair of red panties was between his legs.

So before hiring Evans in 2014, Loh and Anderson did their due diligence. At the time, he was working as a consultant with two senior athletics staffers to increase Maryland football ticket sales, and Loh and Anderson contacted those employees in addition to Georgia president Michael Adams and multiple other former co-workers, all of whom gave glowing endorsements.

Evans was hired as the permanent athletic director just after the university began an external investigation into the death of offensive lineman Jordan McNair. About two months later, ESPN’s reports about McNair’s death and the culture of Maryland football spurred the university to place Durkin, Court and two trainers on leave.

Court admitted to some of the offenses ESPN alleged, and Evans decided his actions were inappropriate. Evans didn’t reach the same conclusion about Durkin but still elected to place him on leave to be safe.

Even this, however, is a point of contention. Evans wrote in a letter that Durkin was “provided an opportunity to discuss this pending action with me,” which the head coach denies, the report said.

Evans accepts some responsibility for failing to monitor Court, but denies there was a toxic culture at Maryland — an accusation the investigation also found to be unfounded — and feels Durkin’s media portrayal is inaccurate.

However, the investigation confirmed media reports about factions and unrest turning the athletic department — one that Evans had been effusively grateful just to be a part of — into a disorganized disaster that took a nosedive almost the instant he was hired.