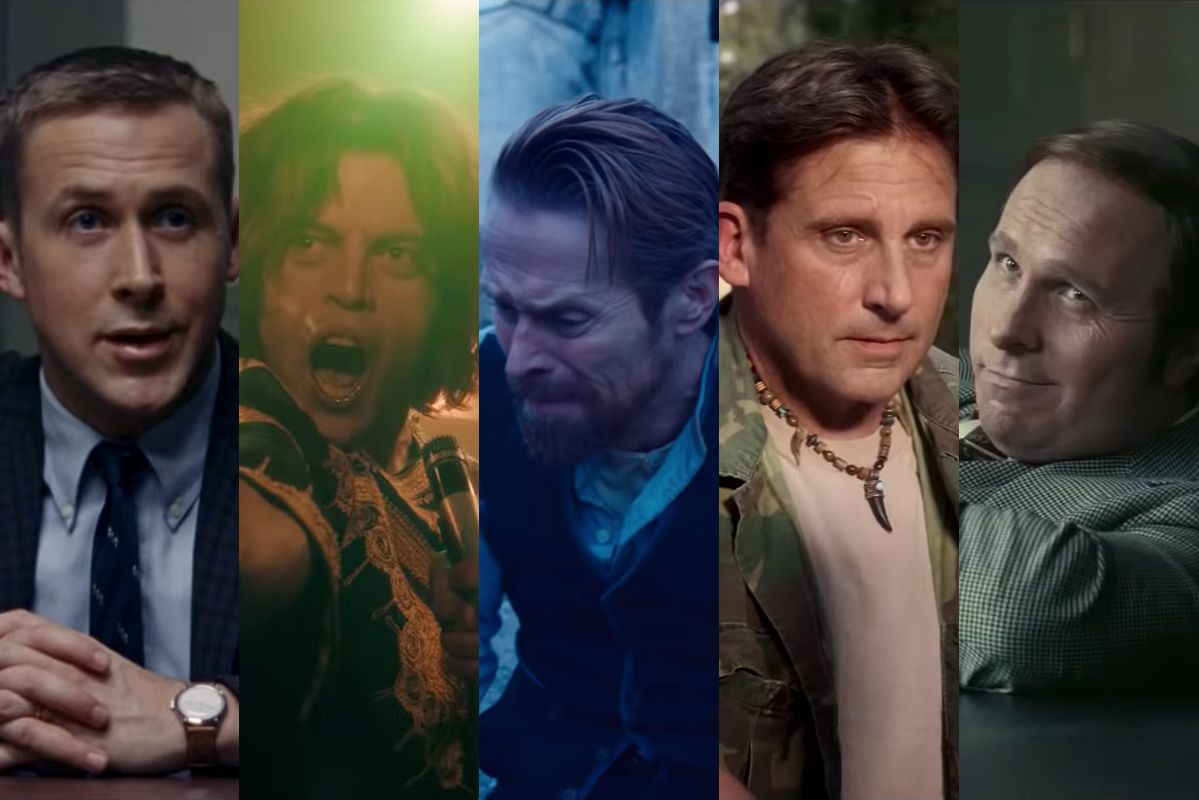 From left: Ryan Gosling as Neil Armstrong in ‘First Man,’ Rami Malek as Freddie Mercury in ‘Bohemian Rhapsody,’ Willem Dafoe as Vincent Van Gogh in ‘At Eternity’s Gate,’ Steve Carell as Mark Hogancamp in ‘Welcome to Marwen’ and Christian Bale as Dick Cheney in ‘Vice.’ (Images via YouTube)

The 91st Oscars are set to air Feb. 24, and as usual, many of the films in contention for awards are hitting theaters this fall. Here’s a list of movies you should try and see before they rack up the awards come Oscar night.

The film is already in theaters, and Chazelle has caught the Academy’s attention. Critics’ responses to the film and Ryan Gosling’s performance indicate the young director may be an award season regular.

The long-awaited Freddie Mercury biopic is almost here. Rami Malek stars as the front-man for the iconic 1970s supergroup Queen. Though there were sexual misconduct allegations against director Bryan Singer — who was fired and didn’t finish directing the movie — the trailers show some promise for the film.

Malek will almost certainly earn a nod for his performance as the rock icon. This is a surefire movie to earn recognition when award season finally arrives.

At Eternity’s Gate (in theaters Nov. 16)

Willem Dafoe feels like the only A-list actor who could play Vincent Van Gogh effectively. His strange face and unfamiliar features fit well with the look of the impressionist, especially when he poses like one of Van Gogh’s iconic self-portraits.

At Eternity’s Gate feels like a quiet, slow-paced movie, but the imagery in the trailer is stunning and evocative of Van Gogh’s work, particularly in how the color pops off the screen. The film will likely receive some nods for its imagery, costuming and perhaps acting.

Welcome to Marwen (in theaters Dec. 21)

Steve Carell continues his turn in dramatic acting in Welcome to Marwen, a story about an injured artist who finds a new way to express himself. Directed by Robert Zemeckis (Forrest Gump, Back to the Future and many more), Marwen seems to be half an emotional-driven drama and half an animated feel-good comedy.

Carell’s dramatic acting has received attention before, as has Zemeckis’ direction. Even if they may not be as likely to make it to the 91st Oscars as other movies on this list, they’re worth keeping an eye on.

[Read more: Review: ‘A Star is Born’ is a shining remake]

Christian Bale transformed into former Vice President Dick Cheney for Vice. Bale looks nothing like himself in the trailer and pulls off a believable evocation of the man without doing a cheap imitation. Last year’s Oscar winner for best supporting actor, Sam Rockwell, also disappears into the role of President George W. Bush, and Carell joins as Donald Rumsfeld.

Amy Adams also appears as Lynne Cheney, and though the trailer doesn’t give us much of her, Adams has been nominated for five Oscars, and her appearance definitely helps.

Adam McKay’s follow-up to The Big Short makes it seem that he not only likes to have a troupe of consistent actors, but that his skill in directing is not limited to comedy, which he was once known for (Step Brothers, Anchorman, Talladega Nights). If you told me years ago that he would’ve been making this movie, I would’ve assumed it was starring Will Ferrell and Darrell Hammond doing their Saturday Night Live imitations.

Fans of movies inspired by real people and events will have a field day this award season, but each film also brings something original to the table. With a combined 21 Oscar nominations and five Oscar wins between these actors and filmmakers, the holidays this year will be a great time to go to the movies.