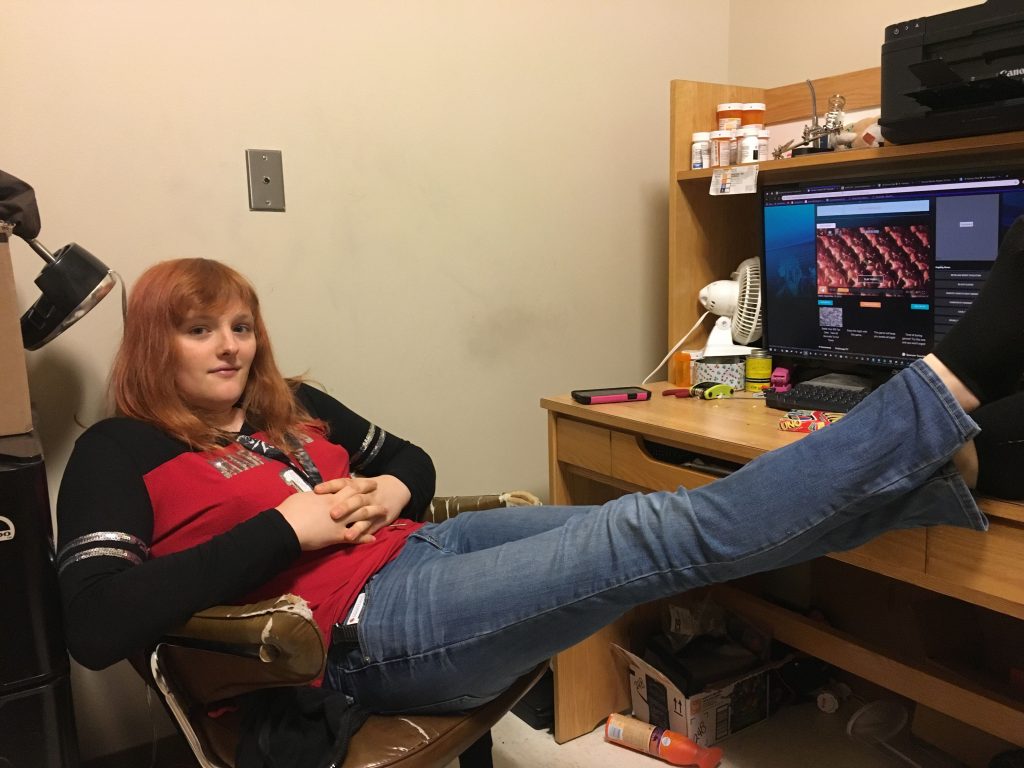 Spencer, pictured here in her dorm room in Oakland Hall, is a sophomore mechanical engineering major who has has bipolar disorder, ADHD and post-traumatic stress disorder. (Angela Roberts/For The Diamondback)

The University of Maryland graduate student, who is autistic, doesn’t express enthusiasm like most neurotypical people. Often, she doesn’t vary the pitch of her voice, so she worries that employers assume she’s not interested in their positions. But when she tries to mimic excitement, she worries that it comes off as insincere.

“It’s like, no, I’m trying to make you understand that this is the emotion I’m trying to convey, and I’m just not doing it instinctively,” said Kraemer, a neuroscience and cognitive science doctoral student.

Navigating the world of resumes, cover letters and job interviews is hard for anyone trying to break into the workforce. But for students like Kraemer who depart from the neurotypical norm, the process is even more challenging.

These students have more to explain to potential employers. It can be anything from a blip in their GPA from a semester when their mental health faltered or accommodations they need to be successful, said Nancy Forsythe, a career development specialist at this university’s career center who assists neurodiverse students with finding employment.

Forsythe said neurodiverse students looking for internships and jobs often slipped through the cracks before her position was created in August 2016. The career center couldn’t fully support them, and the Counseling Center’s Accessibility and Disability Services don’t include career support.

Now, Forsythe works to guide these students through the transition out of college and into a career, in addition to educating employers on the benefits of having a neurodiverse workforce.

Attending key networking events such as career fairs can also be more difficult for neurodiverse students.

Junior computer science major Erin Nordquist, who has social anxiety, said everyday concerns about fumbling over her words or making a negative impression ramp up in this setting. Plus, her nerves get in the way of her ability to talk to recruiters.

“That can be pretty frustrating — seeing other people going around and getting opportunities, when you’re trying and they feel like they’re right there, but it’s just not happening,” Nordquist said.

Spencer, a sophomore mechanical engineering major who asked to be identified by her first name only, said attending these sorts of events is not an option for her, since she has bipolar disorder, ADHD and post-traumatic stress disorder. Those settings have too much noise, too many people and too much stress, she said.

One of the most common questions Forsythe gets from students is when — or even if — they should disclose their disability to their employers. While she said this decision is complicated and different for everyone, she often cautions students against disclosing immediately.

“Most students are shy and recognize, rightfully so, that there are still lots of prejudices and stigma around disabilities,” she said. “You don’t necessarily want to broadcast or disclose unless you have to.”

Spencer, who has had several mechanical engineering internships, said she tells her employer about her conditions the moment she’s hired. Under the Americans with Disabilities Act, a job offer can be withdrawn from an individual who discloses information about mental illness only if there is evidence that the person won’t be able to perform essential functions of the job or the illness poses a real safety issue.

When Spencer’s mental health issues act up, it becomes dangerous for her to work with machinery and electricity. For instance, when her PTSD is triggered, she dissociates, or goes into a dreamlike state.

“When that happens, it would not be safe for me to do anything with tools. And on top of that, I’m probably not going to be very good at conversation, either,” Spencer said.

Kraemer said she might not immediately tell employers that she’s autistic, unless she needs certain accommodations. While it’s frustrating to be judged based on neurotypical norms, she doesn’t want any employers’ misconceptions about autistic people to change how they treat her. And since she was diagnosed just last summer, she’s used to not discussing it.

Still, Kraemer looks forward to finishing up her dissertation in the next two years and potentially exploring autism research or advocacy groups.