There’s no freshmen on the UMD Senate. This proposal could change that. 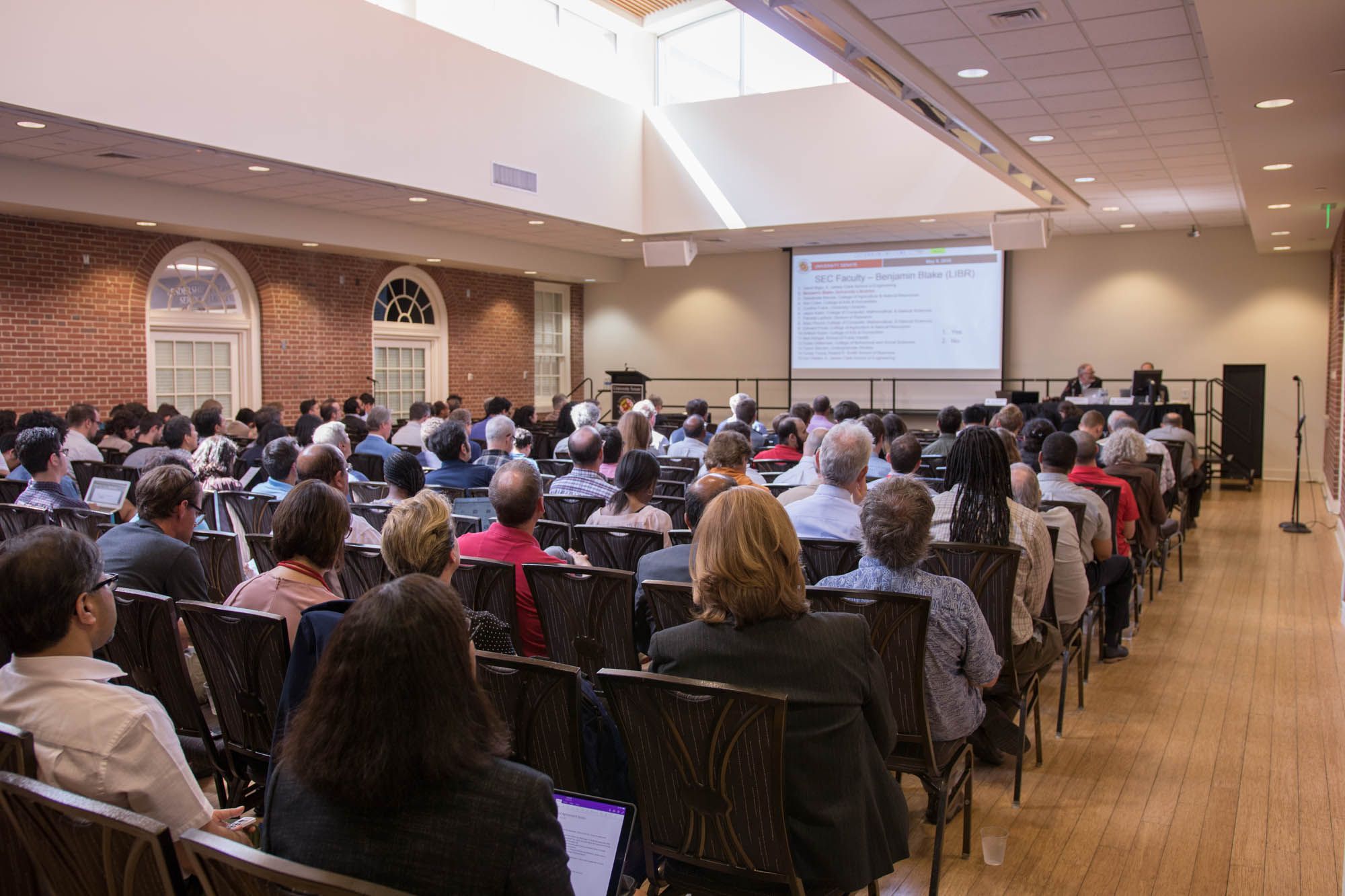 Senate Chair Daniel Falvey discusses the voting procedure. This was a transition meeting for the Senate. The meeting took place in Stamp on May 9, 2018 (Richard Moglen/The Diamondback)

There are zero freshmen in the University of Maryland Senate — but some students and members want that to change.

Current election processes for the University Senate are held in the spring, before freshmen come to campus, effectively preventing them from serving. In September, legislation to add three freshmen representatives with voting rights to Senate committees was proposed.

Eliana Neuwirth, a freshman public policy major, proposed the legislation after noticing that the University Senate was one of the few representative organizations on campus that did not include freshman representatives.

“It’s important to have a current freshman representing what is going on in the lives of the general freshman population,” Neuwirth said.

In her proposal, Neuwirth suggested that freshman serve on the Campus Affairs Committee, the Equity, Diversity, and Inclusion Committee and the Student Affairs Committee. Freshmen would be able to apply for the three committee positions after arriving in College Park.

The policy would allow freshmen to have input in policies that affect them, such as AlcoholEdu — a training on safe drinking that’s mandatory for freshmen — as well as sexual assault training workshops and residence life policies, Neuwirth said.

“From a policy perspective, it’s important to have a population represented in any issue,” Neuwirth said. “But definitely if they’re affected by the policies that are made.”

Neuwirth’s proposal is being sent to the Senate Executive Committee for evaluation, said Reka Montfort, the executive secretary and director of the Senate. They will review the proposal and then determine which committee will be able to do more research into it before drafting final legislation that could be proposed to the full body.

Junior agriculture major Harry Huntley, an undergraduate representative, said freshmen could have a unique perspective on how to improve mandatory trainings.

“If you’re a sophomore, you had to do it, but it’s not as fresh in your mind,” he said. “[There’s] not the same perspective on it as someone who just finished it.”

These trainings have been approved by the Senate, and while there are currently no large-scale complaints, they can always be improved by a closer perspective, Huntley said.

Beyond improving programs like these, Neuwirth said having freshmen on these committees could provide input on campus safety and equity.

But there are still some questions regarding the logistics of the proposal, said Gene Ferrick, chair of the senate’s campus affairs committee.

“Would [freshmen] know better information than a sophomore, junior, senior? That would be my question. Maybe that’s true, I don’t know,” he said.

Ferrick also questioned if the senate would be able to find students who were interested in the position. But he still supports the general idea of adding freshmen.

“I’m all for letting people get involved as soon as they want to,” he said. “For those who are really interested in getting involved, if the Senate office can make something like this work, that’d be great.”