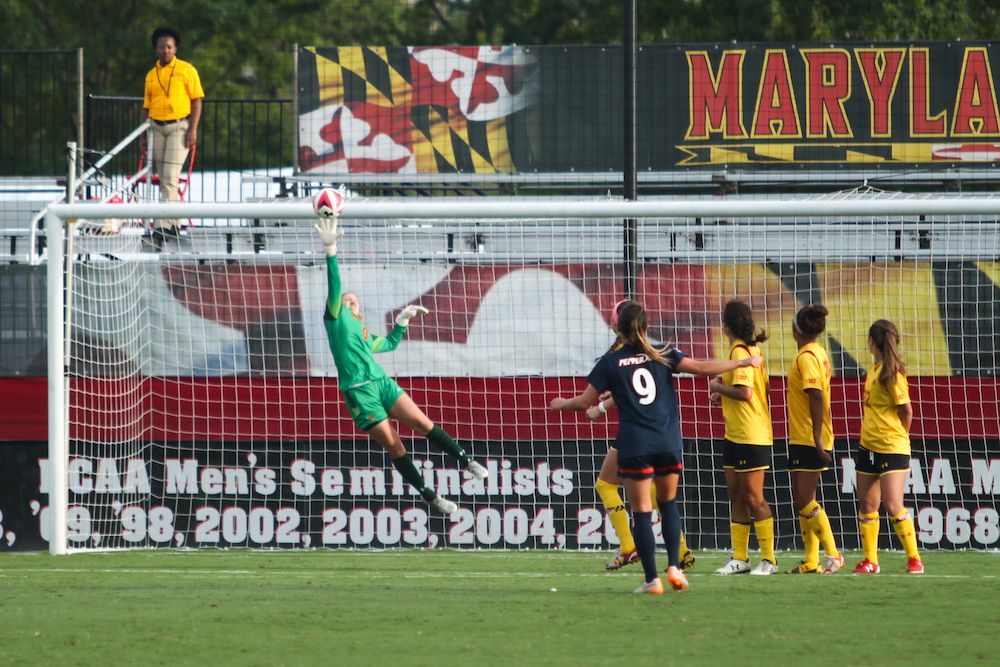 Goalie Rachel Egyed comes within inches of making the free kick block in overtime of Maryland’s 0-1 loss against Pepperdine at Ludwig Field on September 2, 2016. (Reid Poluhovich / The Diamondback)

As the Maryland women’s soccer starting 11 lined up near midfield prior to their matchup with Michigan on Thursday, the squad tried to cope with the low-40s temperatures in Ann Arbor.

Most of the lineup was either rubbing their hands together or rocking back and forth with their arms crossed as the P.A. announcer read off their names.

And from the opening touch, it seemed one of the few Maryland players ready to compete in the conditions was goalkeeper Rachel Egyed.

A career-high 12 saves from Egyed kept the Terps in the game Thursday and even allowed them a 1-0 lead shortly after halftime. But the constant Wolverine pressure led to an own goal from midfielder Anissa Mose and a Sarah Statigakis breakaway that she converted for the decisive goal in Michigan’s 2-1 win, which eliminates the Terps from Big Ten tournament contention.

“[Egyed] was electric,” coach Ray Leone said. “It’s heartbreaking that we’re not going to get into the tournament, because of the performance she’s had all year long.”

Despite Maryland’s glacial start to the game, the Terps emerged from a 10-minute halftime break in the warmth of the locker room with a burst of energy.

Less than two minutes into the second half of a scoreless draw, Mose sent a corner into the box that Wolverines defender Jada Dayne cut off and seemed primed to send out of danger. But forward Alyssa Poarch timed her jump perfectly, deflecting the attempted clearance into the back of the net to give the Terps a stunning 1-0 lead.

Poarch’s score put Maryland (4-9-5, 2-6-2 Big Ten) in position for its first road victory, but a defensive error by Mose redirected an own-goal equalizer past Egyed in the 54th minute. Up to that point, Egyed was unbeatable in goal, continually stifling the Michigan (8-8-1, 4-5-1) attack despite their repeated attacks.

In the opening minutes, Maryland’s defense did little to contain the Wolverine’s forwards. Fortunately for the backline, Egyed was up to the challenge.

A defensive breakdown just five minutes in allowed forward Reilly Martin a clean look at goal, but Egyed made a diving save to deny the senior. Then, a few minutes later, a poorly-timed challenge from defender Niven Hegeman gave Martin another breakaway chance, but the redshirt senior denied the Wolverine attacker yet again with an impressive reaction stop.

And midway through the first half, Egyed made a diving save once more, this time on a skidding shot by forward Nicki Hernandez.

“When she made a couple of those saves in the first half, they were so well-struck and so quick, and she got down like something I’ve never seen,” Leone said. “She’s playing at such an extraordinary level.”

Maryland likely wouldn’t have entered halftime knotted a scoreless battle without its even-keeled goalie. Michigan held an 11-3 shot advantage, and only one of the Terps’ shots found the frame. Meanwhile, Egyed was tasked with making six first-period saves.

Those stops allowed Poarch to give Maryland a lead, but it was short-lived. Mose’s own goal was followed by Statigakis’ game-winner in the 67th minute, and the Terps couldn’t answer.

As has been the case throughout Maryland’s season, the pressure from opponents eventually paid off. So after entering Thursday in need of two wins to have a chance at qualifying for the Big Ten tournament, Maryland will travel back to College Park knowing that Sunday’s game against Indiana will be the last of the season.

“Just for Rachel alone we ought to be bringing it [on Sunday],” Leone said. “They’re trying very hard, but they’re not playing at the level that they could. And that’s what I hope for this last game.”