Larry Hogan, your cowardice is showing 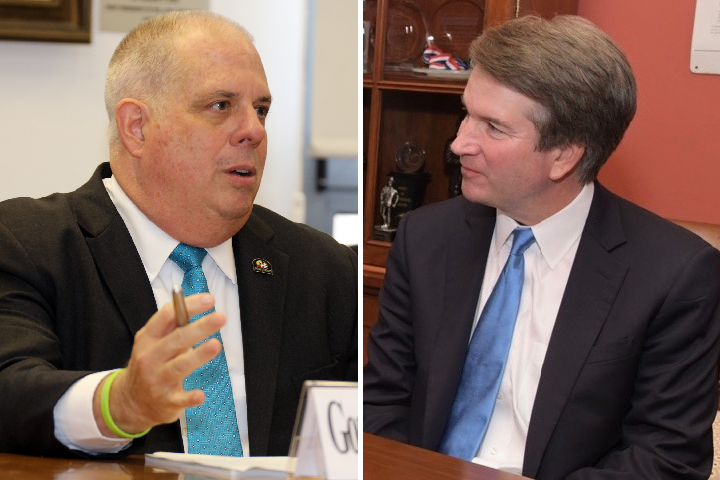 Now, Hogan is dodging questions on whether Brett Kavanaugh should sit on the Supreme Court. Along with a record of weakening workers’ rights and indicating he doesn’t think Roe v. Wade is an established precedent, Kavanaugh faces multiple, credible accusations of sexual assault and misconduct. Republican Sen. Lisa Murkowski voted against his appointment, as have many other prominent Republicans, and more than 2,400 lawyers signed a letter opposing his confirmation. So then, why is “moderate,” Hogan staying mum on the nomination of Kavanaugh to the highest court in the nation?

In our opinion, Hogan’s refusal to take a stand stems from a simple fact: He is a coward who does not have the courage to lead Maryland forward. Not only is cowardice a poor quality for a public official to hold, it has frightening implications for Hogan’s second term and the actions he will take when he doesn’t have to worry about re-election.

Hogan has shown his true colors time and time again. From killing the Red Line, a mass transit project that would have invested billions of dollars into the most economically disenfranchised neighborhoods of Baltimore City, to pushing for tens of millions of dollars in cuts to education funding, to his opening of the Chesapeake Bay to robber barons and polluters, Hogan has proven his allegiance to the Republican Party over the concerns of his constituents.

While not surprising, Hogan’s actions in the wake of the Kavanaugh allegations are no less concerning. Hogan’s cowardice started with his dismissal of the pleas of Maryland legislators to have state police investigate the claims of sexual misconduct at Kavanaugh’s hands, which allegedly occurred in our state. When pressed directly on whether Kavanaugh should sit on our nation’s highest court, Hogan demurred, saying: “I’m not qualified to make those decisions. I’m not a member of the Senate.”

Well, Hogan, you don’t need a Senate seat to know this: A possible sexual assailant on the Supreme Court is an abomination. The message that Kavanaugh’s appointment sends to survivors of sexual assault is extremely disheartening. The fact that Hogan can’t unequivocally state as much demonstrates an alarming lack of empathy and human decency.

If re-elected, Hogan will likely be appointing five new judges to the Maryland Court of Appeals. In the wake of our nation’s Supreme Court becoming the most conservative it has been in modern history, we need to know that our state’s leaders will protect us from this toxic administration in Washington, D.C. Hogan has made it clear that he will not.

All of this is why we’re voting for Ben Jealous. Elections matter, the character of our governor matters and making sure we have someone who has the courage to lead matters, now more than ever.

Signed by the Executive Committee of the Maryland College Democrats,