It’s a girl! Researchers surprised to find the original Testudo may have been female 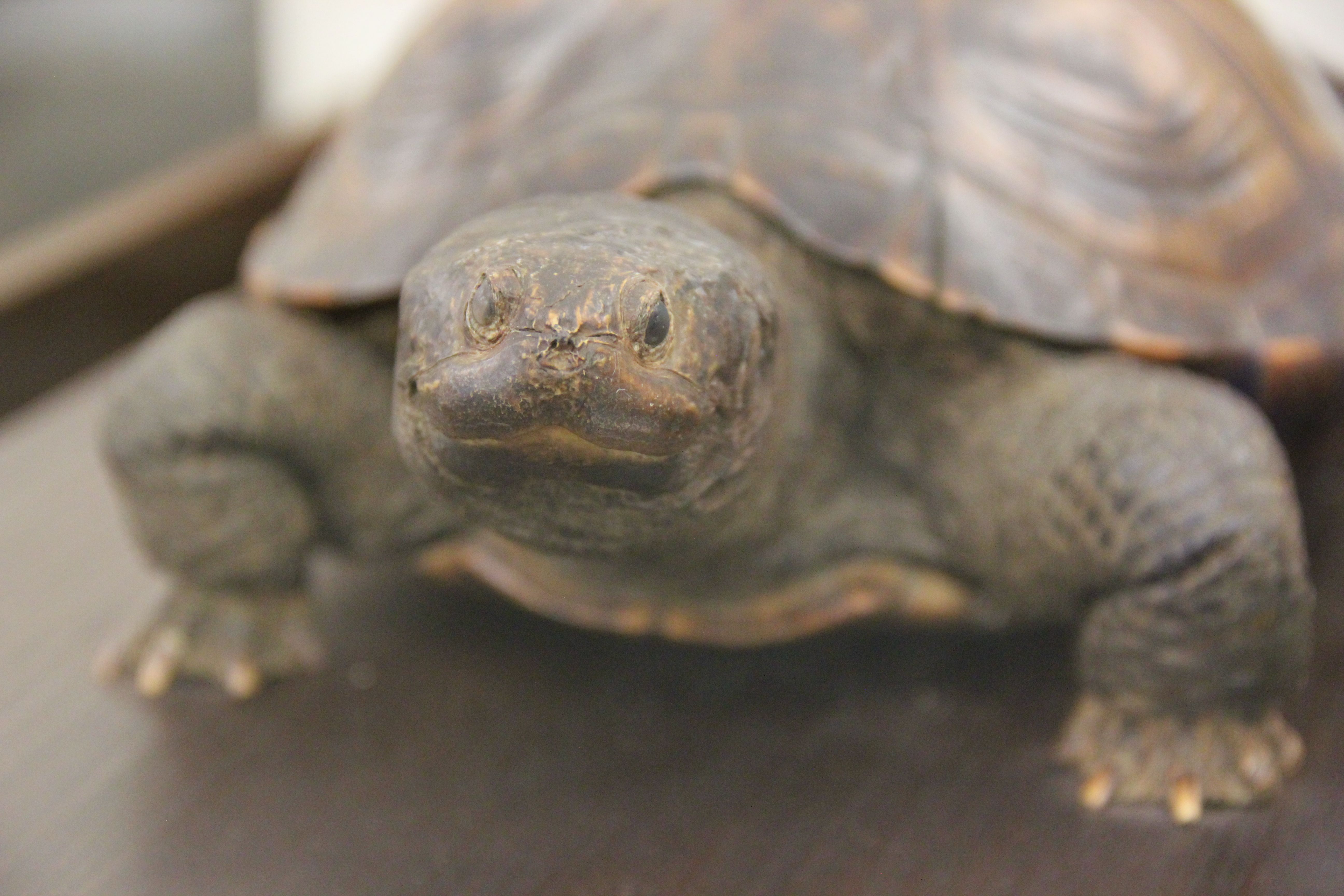 The original Testudo, taxidermied, possesses biological features that suggest it is a female terrapin. (Photo via University Archives.)

John Pease had a burning question.

A sociology professor emeritus at the University of Maryland, he had been researching Testudo — the diamondback terrapin that serves as the school’s mascot — for a few months. While he had gathered a fair amount of information about Testudo, he couldn’t nail down the turtle’s gender.

“Everybody always refers to [Testudo] as a boy. What’s the deal with that?” he said.

In September, Pease emailed Jennifer Murrow, a professor in the environmental science and technology department at this university, to ask if she could identify the gender of the bronze Testudo statues across the campus.

Murrow wrote back that the higher dome of the terrapin’s upper shell, its larger head and its small tail suggest that, biologically, the Testudo statues are female.

With that indicated, Pease said, “it’s time to give women their due.

“It just struck me that we have this fearless slogan on campus, and it occurred to me that we now know why we’re fearless: we’re being led by a female,” he said.

After multiple requests for comment, university spokespeople did not provide one.

University archivist Anne Turkos showed Pease and his research team graphical representations of Testudo over time, as well as the original, taxidermied terrapin that was the model for the bronze statues.

In 1933, Harry Clifton “Curley” Byrd, the university’s vice president at the time, requested a live terrapin to model for the statue. Turkos said gender wasn’t a factor.

“People can say that they don’t see Testudo as masculine and that’s fine, that’s awesome, but that still doesn’t negate the history behind Testudo as a girl,” Stavisky said.

In 1999, Smithsonian conservation specialist Catharine Hawks was brought in to examine the taxidermied terrapin’s condition and suggest repairs. Turkos said Hawks noted that the terrapin may be female due to its large size.

“We’ve been open [about the gender] with everyone who’s come in since Cathy did her work here,” Turkos said.

The archivists have found more than 70 graphical representations of Testudo, dating back to 1933. Among them was a “distinctly female representation” named Testudinette, with curls and a pocketbook, Turkos said.

Turkos said she thinks Testudo as a symbol is “versatile” and a “rallying point for our current students.”

Researchers could confirm Testudo’s gender by observing its stomach, but neither the taxidermy nor the statues can be removed from the bases they’re attached to. Because of this, Turkos said she’ll continue to consider the claim “speculation.”

“I’m still not sure that it is a female, because we may never know,” Turkos said. “We’re not taking it off the board.”

Murrow said her graduate students considered the terrapin “gender non-conforming,” and they all thought the debate was funny.

“I always thought that Testudo didn’t have a sex,” she said. “Apparently it’s a big deal, because I didn’t realize that people had been using the male pronouns.”

Alexis Lothian, a women’s studies professor at this university, said that without acknowledging a difference between male or female, “what you end up with is the status quo.”

“The assumption of Testudo’s maleness probably speaks to the default maleness that is in operation all over the university, within sports, within academics and within many, many contexts,” she said.

Stavisky said Testudo’s portrayal of “brute force” in ad campaigns — such as one in 2014 that CBS Sports said would “live in your nightmares” — “helps feed into the image of what men should look like, what Testudo should look like and what our school should be like.”

“Our university has historically treated Testudo as not just an androgynous creature, but as a masculine symbol for our power as a university,” Stavisky said.

Yuxiang Lai, a freshman studio art major, said he doesn’t think Testudo’s gender matters, but that people probably refer to Testudo as a “he” because of how it’s displayed in brochures, promotional materials and merchandise.

“It has a very strong jawline, very strong browline and angled eyes, so it’s displayed as powerful and aggressive,” he said.

Freshman English major Hannah Parker agreed the assumption that Testudo is a male “does say something about society.”

“It’s kind of a dumb thing to get mad about,” Parker said. “It’s like, why are you so mad the mascot’s a girl?”