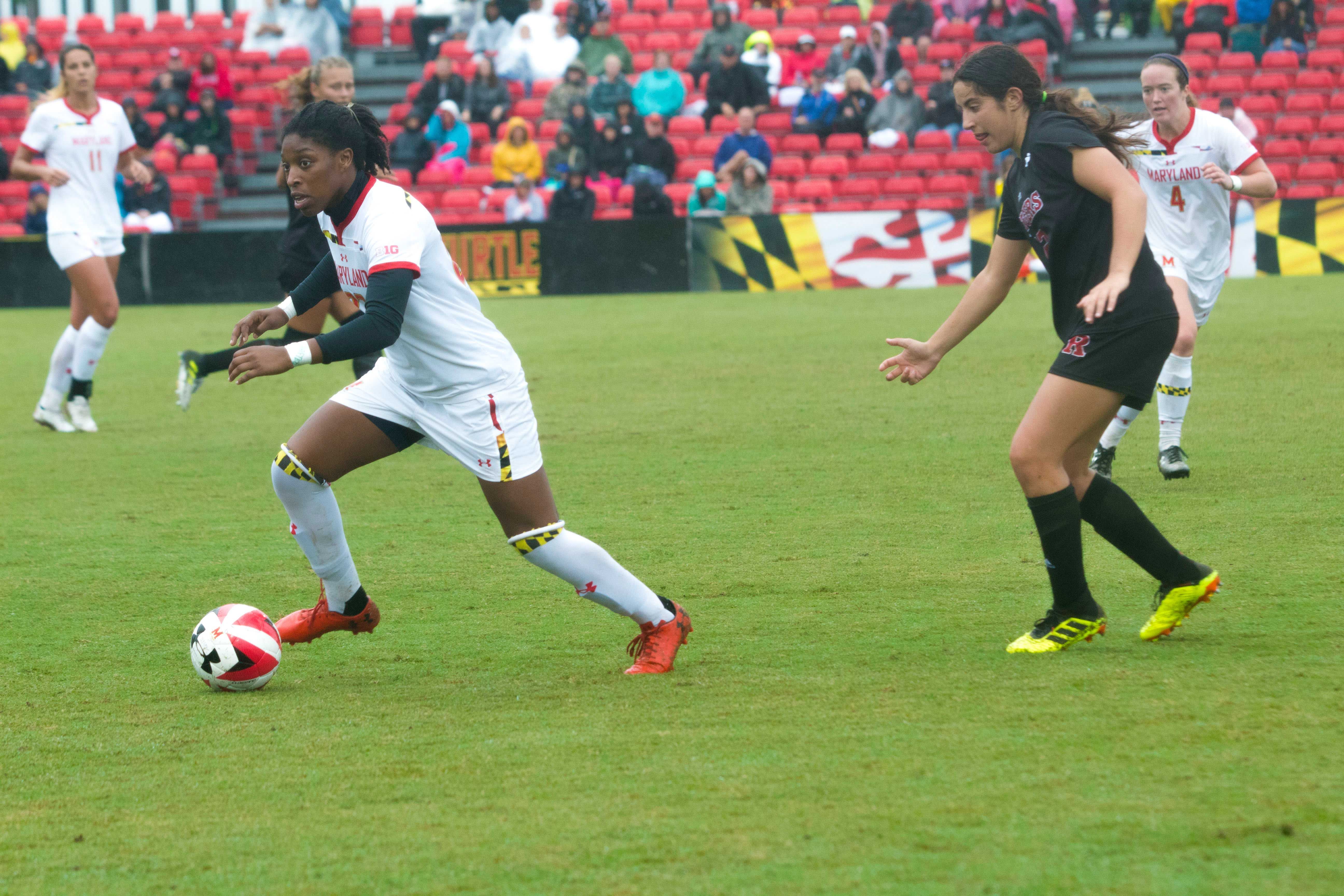 When Maryland women’s soccer forward Jarena Harmon corralled a slicing through ball off the left foot of midfielder Darby Moore in the 16th minute against No. 14 Northwestern on Sunday, the senior earned a chance to net a crucial goal just minutes after being honored on her senior day.

Prior to kickoff, Harmon received a framed jersey and flowers near midfield. Before that, Harmon’s and three other seniors’ bios were read over the PA system at Ludwig Field, but the forward made sure to add to her career accolades shortly after.

Harmon laced the feed from Moore past goalkeeper Mackenzie Wood and into the top-right corner of the frame, giving the Terps a 1-0 lead over the Wildcats. Midfielder Loren Sefcik added another score late in the first half as Maryland hung on for a 2-1 victory over Northwestern, the program’s first ranked win in more than four years.

“I’m just so happy for them,” coach Ray Leone said. “They’ve worked so hard in every single game, and they finally got a deserved result. They really played well today.”

While Harmon provided a spark in one of the final home games of her college career, Sefcik fortified the Terps’ early advantage, giving them breathing room over the Wildcats, and goalkeeper Rachel Egyed made sure it stood up.

In the 34th minute, Midfielder Hope Lewandoski laid a skidding feed into open space out wide to Sefcik, and the freshman had little time to settle herself before unleashing a shot on goal.

With midfielder Marisa Viggiano bearing down, Sefcik, fading away from the goal, unloaded a shot around Wood and into the top-left corner. The curling goal was the midfielder’s first of her career and gave Lewandoski a team-leading third assist of the year.

“Something that this team does is we really feed off of each other’s energy,” Harmon said. “We’re pretty energetic as soon as we score, and we looked to maintain that… we had a good effort against a really good team.”

While Harmon and Sefcik provided the offense, Egyed may have had the biggest impact on the senior day triumph.

Although Maryland rushed to an early two-goal first-half advantage, the Terps weren’t the better of the two teams for much of the afternoon. Egyed, however, continually denied the Wildcats, keeping them off the board apart from a 54th-minute score.

Egyed made a diving save in the 71st minute minute to keep Northwestern from equalizing, and calmly punched the ensuing corner kick away from danger. The redshirt senior faced 21 shots and made seven saves in one of her best performances of the year.

Egyed never had a chance in the 54th minute, though. when forward Brenna Lovera broke free in front of her and kneed home a cross from Viggiano.

Despite a 2-0 halftime Maryland advantage, the Wildcats outshot the home side 11-5 during the first 45 minutes. The Terps goals came from opportunistic counters, and none of the Northwestern chances troubled Egyed until the second half.

Egyed was up to the task on her senior day, nullifying the Wildcats’ 21-8 shot advantage and securing the Terps best Big Ten record since 2014.

“Senior Day is an emotional day,” Egyed said. “It’s a special day, an important day, and we wanted to make it a special day for the team. It was a great win and I’m so proud of everyone.”