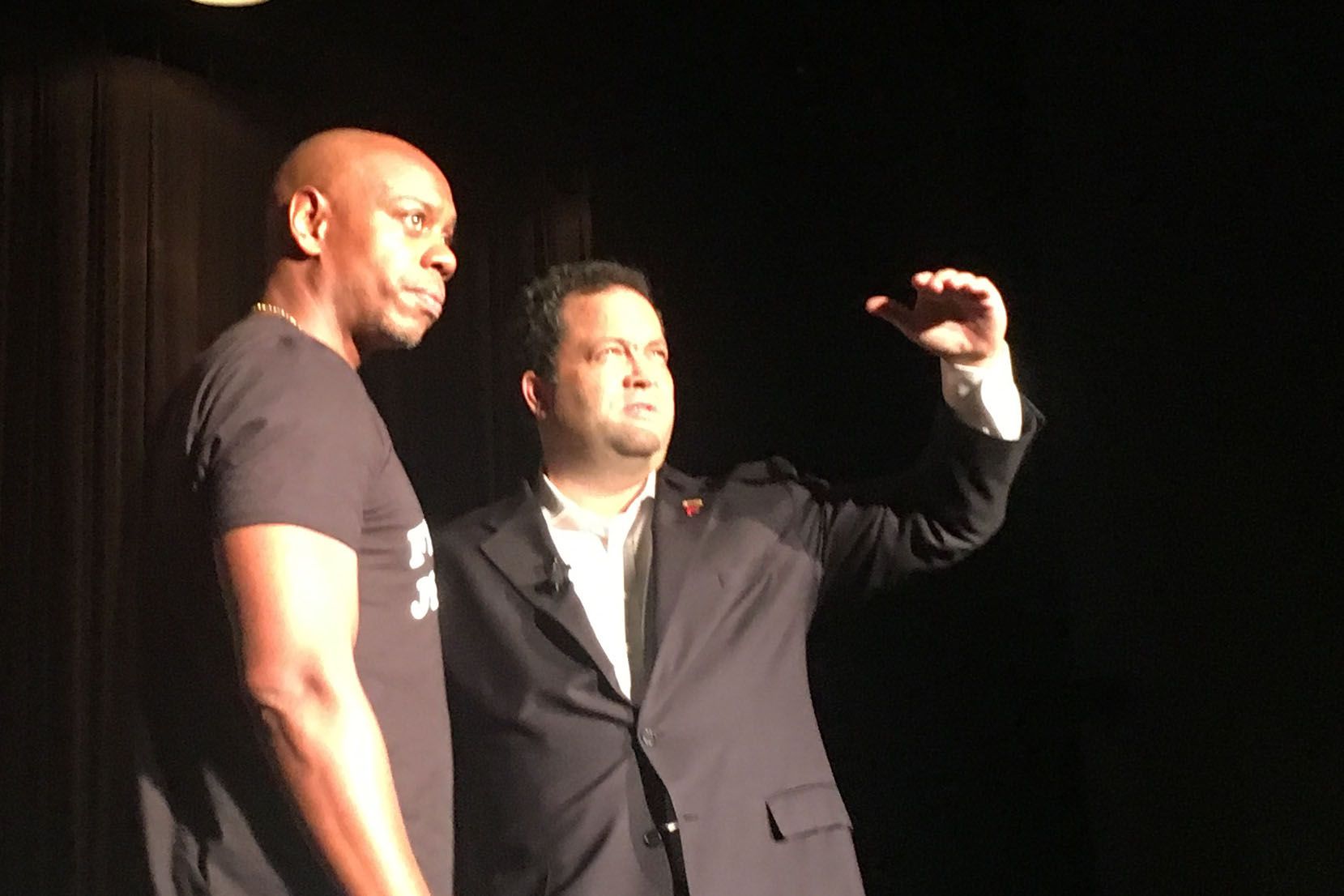 Ben Jealous brought Dave Chappelle, his godbrother, to campaign alongside him at UMD's Hoff Theater on Saturday. (Angela Roberts/For The Diamondback)

Comedian Dave Chappelle didn’t try for many laughs when he stumped for Ben Jealous at the University of Maryland on Saturday night.

“I feel real uncomfortable sometimes when I gotta talk to audiences without punchlines and jokes, but I feel very confident in what I’m telling you right now,” said Chappelle, a Silver Spring native. “I really do believe in this person, and I’m sure he’s going to do a great job for Maryland.”

The event, which was sponsored by the university’s College Democrats chapter, drew a crowd of about 500 to Stamp Student Union’s Hoff Theater.

For 15 minutes, Chappelle explored the longtime friendship he shared with Jealous, who he met when he was 17.

After the comedian closed out his remarks, Jealous stepped up to the podium and described a photograph of his godbrother Chappelle — where Chappelle is sporting an Afro and a blue jacket —that sat on the mantlepiece of his childhood home.

Then, Jealous dove into a passionate recitation of his platform, affirming promises to work to end mass incarceration, push for health care for all and make clean and renewable energy the state’s “moonshine.”

But the former NAACP president drew the loudest applause when he promised to fund universal Pre-K in Maryland by legalizing and taxing cannabis for adult use. Audience members jumped to their feet and cheered, roaring with laughter when Chappelle leapt up to hug Jealous.

“He’s the cannabis lobby,” Jealous announced to the crowd. “[Chappelle] had one talking point since we were 17 years old when it came to politics: ‘Yeah, yeah, yeah, and we need to legalize cannabis.’”

CNN political commentator Van Jones also came out to support Jealous, delivering an energetic and goofy speech before the headliners arrived. He begged audience members not to settle for incumbent Gov. Larry Hogan, who he called a “Diswilldo” governor, ragging on a Southern tendency to blend together the phrase “This will do.”

In September, a Goucher College poll showed Hogan had a 22-point lead over Jealous. But the Democratic nominee said he refuses to be deterred by the numbers.

Jealous said to thundering applause from the audience that his campaign would build a larger “ground army” than Hogan and run a positive, individual-funded campaign.

But not all in the crowd were Jealous supporters. Senior government and politics major Ben Reichard said he’s planning to vote for Hogan next month.

“I’m interested in hearing what Jealous has to say, but Hogan has done a fantastic job balancing the budget,” Reichard said.

Freshman English major Senam Attipoe is eagerly awaiting her chance to cast a ballot for Jealous, who would be Maryland’s first black governor. Attipoe said black women like herself face unique issues, which not all candidates are able to understand.

“It’s hard sometimes to be a minority, especially when the person in power does not identify with you,” said Attipoe. “Even when they do try to understand, sympathy is different from empathy, and we need somebody who will empathize with us.”

CORRECTION: Due to an editing error, a previous version of this story misspelled Dave Chappelle’s surname. The story has been updated.