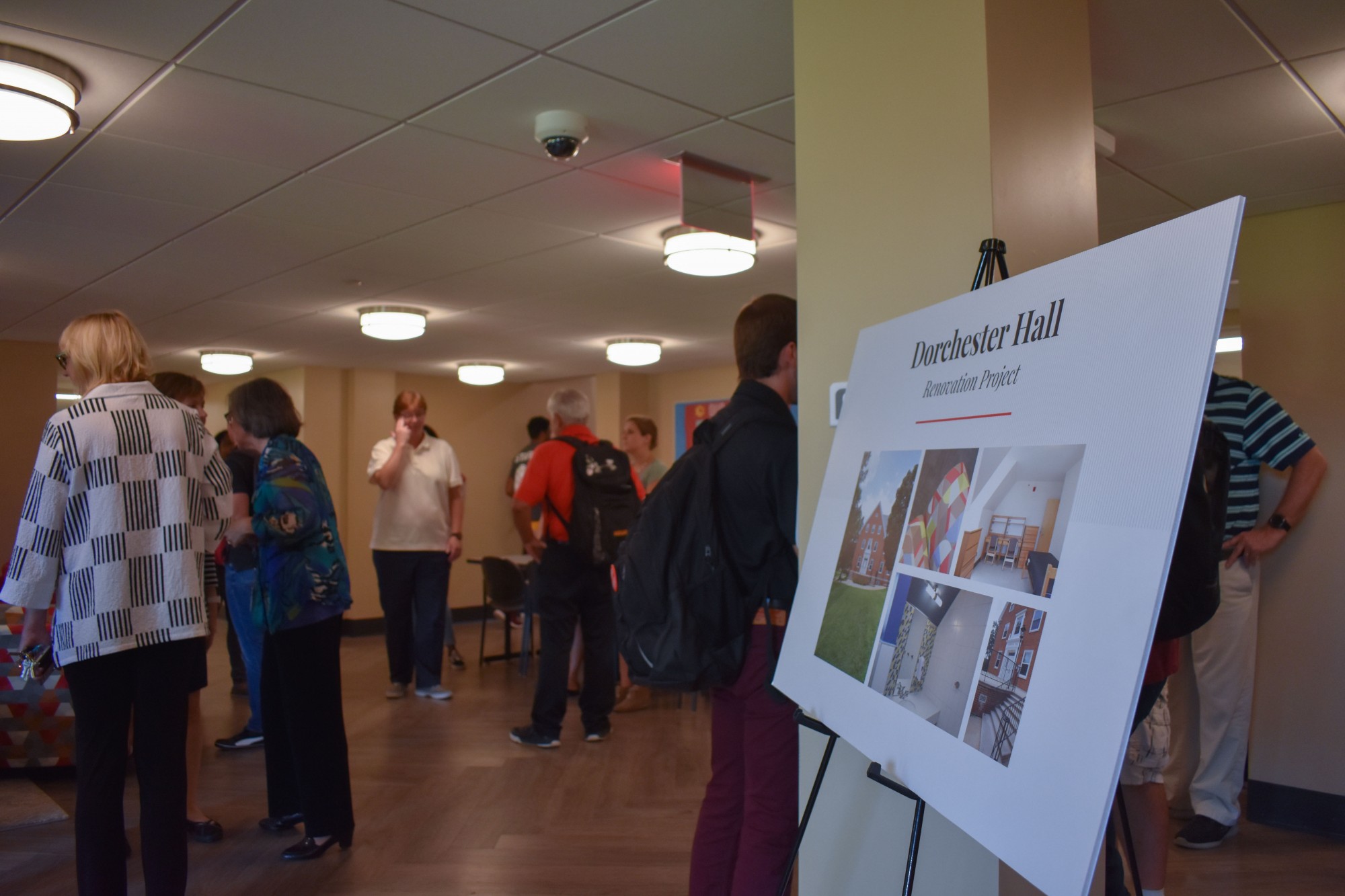 After closing in December 2017 for renovations, Dorchester Hall now has several upgrades, including an updated kitchen and two gender-neutral bathrooms per floor.

The Department of Resident Life held a grand opening for the nearly 60-year-old dorm Wednesday to celebrate construction completion and offer tours of remodeled areas. Now, all doors automatically lock, and each floor has a water-bottle filling station. Additionally, new windows were added, the laundry room was renovated and the ventilation system was upgraded.

Though students have been living in the dorm since August, Resident Life associate director Dennis Passarella-George said the department “wanted to make sure that students could get settled and really make this feel like their home, and then take some time to celebrate after they’ve had their first beginnings.”

More than 20 faculty, staff and students noshed on cupcakes and refreshments while they listened to speeches from Resident Life officials and Residence Hall Association representatives at the opening.

Half of the building’s floor lounges were converted into livable dorms with typical furniture. Other new additions included floor lounges on the ground-level and first-floors, and study lounges were added on the second and third floors. Bill Olen, Facilities Management’s design and construction executive director, said in March 2017 that bed counts would drop from 168 to 141 due to the added amenities.

Neil Agrawal, a sophomore aerospace engineering major, was one of the Global Communities living-learning program members who lived in Elkton Hall last year. Since he gets to live in Dorchester this year, the renovations are “wonderful,” he said, but he doesn’t think that they were worth it.

“For the amount of people that are actually in this dorm, I don’t think it was worth it, you know, considering that we have mold in Elkton Hall and everything like that,” Agrawal said.

Global Communities Director Virginia Haufler said that while Passarella-George was good at “warning [her] of things that sounded good that might not happen,” he was also good at bringing her “21st-century” vision for the dorm to life.

Lance Lewis, a senior civil engineering major who led a tour, touted the laundry room’s “brand new, only-in-this-dorm Maryland tiles” — which have yellow and red squares on white tile. He also said that the kitchen was moved from the bottom of the stairs to an old study space and given “high-end appliances.”

Another major renovation focused on bathrooms and plumbing.

Ryan Manning, the South Campus Commons Resident Life community director, said the department added an additional community bathroom to each floor with changing rooms separate from the showers. He said there “used to be just one big bathroom for the whole floor,” but now there’s two gender-neutral, one female and one male restroom per floor.

Freshman mechanical engineering major Gregory Thai was a fan of the changes.

“They’re really nice personal bathrooms, whenever you want to take a really long shower and not make anyone mad,” Thai said.

All in all, RHA president Bryan Gallion said the changes were a “great addition to the community.”