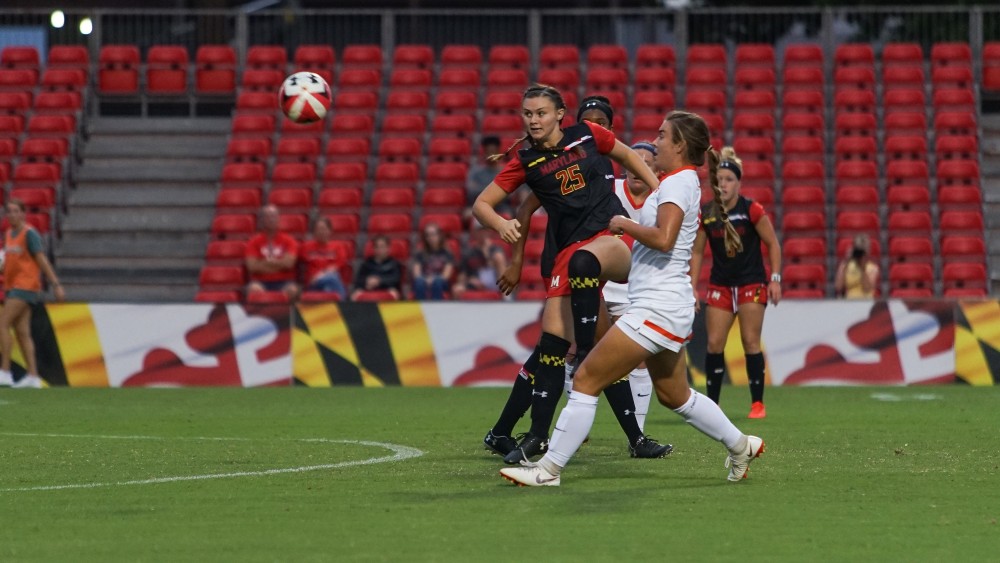 During a 45-minute weather delay Thursday, a Maryland women’s soccer coach found his way into the press box at Ludwig Field for one more look at a penalty call made moments before the rain began lashing down in College Park.

“That’s so bad,” the coach said, no more pleased with the decision on second glance than he had been from the sidelines.

Locked in a scoreless draw midway through the second half, midfielders Anissa Mose and Hope Breslin jockeyed for possession in the box, and Breslin tumbled to the turf. The spill drew a penalty call from referee Sergio Gonzalez, and Mose, who shook her head in disbelief, was handed a yellow card for the infraction.

Breslin calmly skidded a low shot inside the left post despite a diving attempt by goalkeeper Rachel Egyed, and the Illini held on for a 1-0 victory over Maryland, who struggled to produce many dangerous chances after the disappointing goal.

A week prior to the Terps’ Big Ten opener against Iowa on Sept. 14, coach Ray Leone explicitly stated his expectations for his young Maryland squad: improve on their results against each of their 2017 conference opponents. But after Illinois converted on the costly penalty call on Mose, the Terps didn’t achieve that benchmark.

Despite the controversial penalty call, Maryland nearly rebounded to find a late-game equalizer. Forward Jarena Harmon slid to reach a ball deep in the box and put a shot on target with only five minutes remaining, but the side judge called the senior offside.

In the opening period, neither team had many good chances on goal. Although both squads had five shots, forward Alyssa Poarch’s seventh-minute try was the only that troubled either goalkeeper.

Midfielder Loren Sefcik laid the ball off to Poarch, who took one touch and struck a laser towards the top-right corner of the frame, but goalkeeper Jaelyn Cunningham stuck out her right arm and punched away the early-game strike.

After failing to score in back-to-back contests going into the matchup with Illinois, Leone utilized a variety of lineups in the first half to stimulate the struggling attack. Forward Katie Krotee earned her first career start, and the freshman was exchanged for fellow first-year forward Emily McNesby after just 15 minutes.

Then in the 28th minute, usual starters forward Jarena Harmon, midfielder Hope Lewandoski and defender Jenna Surdick were each subbed in to give the Terps’ rotation a spark before halftime, but neither side could find the net until Illinois game-winning goal.