UMD College Republicans: We must re-elect Hogan to preserve his economic successes 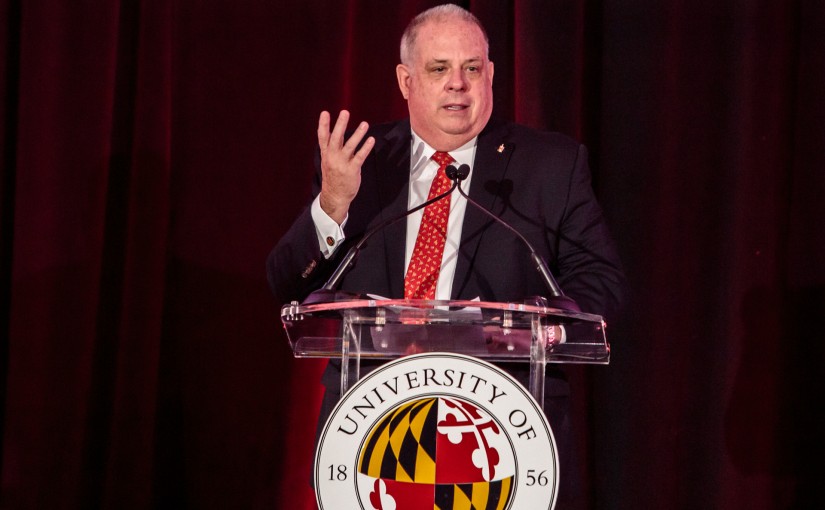 It’s more than a catchy campaign slogan, or the greeting on state highway signs.

It’s being able to put more food on the table. It’s over 100,000 new jobs and the lowest unemployment rate Maryland has seen since 2008. It’s businesses like Marriott staying, expanding, and employing thousands in our state. “Maryland: We’re Open for Business” — these five words signify the opportunity and optimism felt around our state under Gov. Larry Hogan’s administration.

Republicans, Democrats and Independents from across the state made it known in 2014 that it was time to put our state on a better and brighter path. Fed up with years of job-killing regulations and over-taxation, and tired of politics as usual, Marylanders voted for change. Small business owners, parents and teachers, among many others, made their voices heard and backed Larry Hogan for governor.

Known for his bipartisan approach, Hogan has proven that he puts politics aside and works across party lines to enact common-sense reforms, reigniting our great state’s potential and putting an end to policies that created unreasonable barriers to growth. Maryland Department of Labor, Licensing and Regulation Secretary Kelly M. Schulz praised the Hogan administration: “Under Governor Hogan’s leadership, the Maryland economy is strong and dependable, giving employers the infrastructure they need to thrive and create jobs.”

After nearly four years in office, Hogan has kept his promises and created one of the greatest economic turnarounds. With careful fiscal management, the state of Maryland has seen strong revenue and budget results, most recently ending the last fiscal year with a $504 million surplus.

Over the past four years, Hogan has cut taxes, tolls, and fees by a total of $1.2 billion and put that money back into the pockets of Maryland’s hardworking citizens, retirees and small businesses. Furthermore, Hogan has completed four budgets without a single statewide tax increase, offering a breath of relief for Marylanders from the previous administration of Martin O’Malley, who pushed through a destructive 40 new taxes.

While Hogan has made great strides in improving our economy, there’s still much more to be done. According to recent Goucher Poll results, Marylanders feel they’re still being taxed too heavily. Despite Hogan’s push to return even more money to taxpayers, these efforts have been thwarted by the veto-proof supermajority that the Democrats hold in the General Assembly. It’s time to give Hogan more allies in Annapolis who will support his common-sense reforms and work with him to continue creating a climate of economic growth.

With Hogan up for re-election on Nov. 6, it’s time for Marylanders to decide what type of future we want. Do we want to go back to the days of tax-and-spend policies that create major obstacles to growth and prosperity? Or do we want a future where we have better job prospects? A stronger economy? A less financially burdensome retirement for our parents and grandparents?

This year, the stakes could not be higher. Hogan is facing an opponent with an extremely costly agenda. Ben Jealous’ plans would require tens of billions of dollars in new spending and would result in extremely negative and lasting consequences on our state. According to a nonpartisan analysis, Jealous’ health care plan alone could cost $24 billion, which would force state lawmakers to significantly raise our taxes. It is no surprise that Democratic leaders from across the state, including Comptroller Peter Franchot, are refusing to endorse their party’s nominee.

This gubernatorial election will have important and direct impacts on college students like us, with many of our classmates preparing to enter the workforce after graduation. We just spent four years going in the right direction — we cannot afford to go back.

Signed by the University of Maryland College Republicans members,