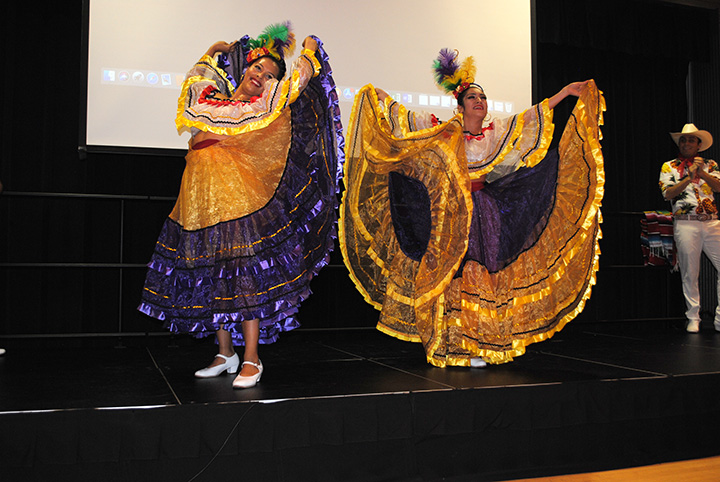 The University of Maryland’s sixth annual Latinx Monologues showcased a variety of art with a vibrant message — the power that comes from using culture and tradition as an act of protest and redefinition.

Latinx students performed personal poetry that covered topics from the stabbing of 2nd Lt. Richard Collins to the intersection of LGBT and Latinx communities. Students spoke of how their language, ethnicity and culture have defined them.

The Latinx Monologues gave students and performers the ability to define themselves in their own words.

Tania Otero Martinez, a sophomore criminology and criminal justice and public policy major, performed her original poem “Niña Eres” at the event. She said the Latinx community is often left out of the political conversation.

“To have students come forward,” Otero Martinez said, “it not only creates an environment for us to be able to express ourselves, but it also educates our fellow students who may not be aware of the things that we go through.”

In the sixth year since they began the Latinx Monologues, the Political Latinxs United for Movement and Action in Society have continued the idea that art can be a form of protest and political action.

Dancing, poetry and spoken word are all “different forms of being an activist,” said Blanca Arriola Palma, senior government and politics major and president of PLUMAS. Events like this one provide a space for Latinx students to celebrate and express themselves freely, she said.

PLUMAS began the night with an acknowledgement of the land, something applauded by performer Karla Valentina Casique, who used her poetry as a way to express creativity as well as social activism.

“I like to acknowledge that this is Piscataway land,” Casique said before her performance. “This university was built on a plantation … and this institution continues to profit off … black death and black excellence.”

The night of art culminated in a keynote performance by Corazón Folklórico DC, a local Folklórico group that aims to showcase their cultural knowledge and talents through traditional Mexican dance and free classes and performances.

Dancers in exceptionally bright layers of clothing stomped and danced around the room, placing leis on the heads of the spectators. Men and women danced together across the stage, calling out to each other and pretending to kiss.

Alejandro Góngora, who founded the group just over a year ago and serves as the board chair and producing artistic director, said he has always been drawn to learn more about his heritage and cultural identity.

“For me,” Góngora said, “being a folklorista, a dancer of my heritage, is my activism.”