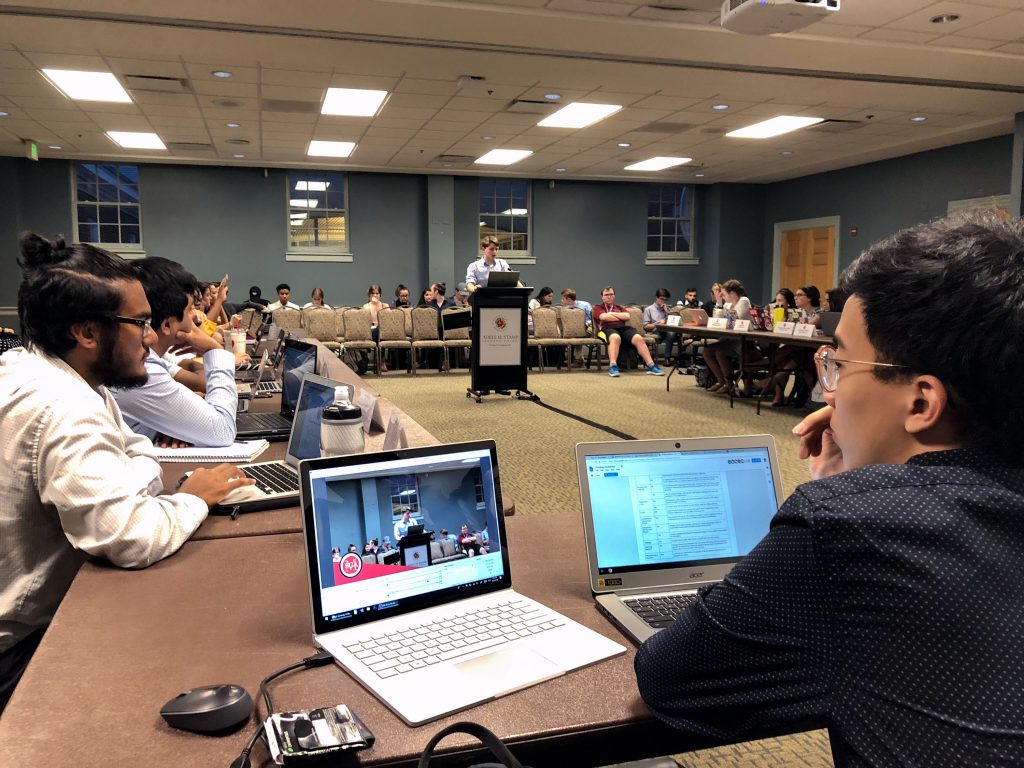 Some University of Maryland student groups voiced their opposition to an SGA bill authorizing equipment and staffing for an annual crab feast paid for with student money.

Students for the Ethical Treatment of Animals and Cruelty-Free Vegan Living cited concerns with boiling crabs alive and environmental effects, such as the decline in blue crabs in Maryland, in the hour-long debate before the bill was passed Wednesday night.

The $3,820 event would pull funds from the Student Government Association’s legislative reserves, which are funded by the mandatory Student Activities Fee.

“Boiling crabs alive is violent,” said Maille O’Donnell, board member of SETA. “A lot of people might not be concerned about it … but part of the matter that we brought up and that part of what was said in the debates was basically that certain students feel really uncomfortable and this is a big issue to people who feel that.”

The annual crab feast, hosted by the Student Government Association, has been a university tradition for 13 years. Parents, students, alumni and others break out mallets and crack open steamed crabs, slurp crab soup and enjoy some non-seafood options, including carved roast beef and a vegan buffet.

Chris Niccolini, a behavioral and social sciences college SGA representative, said the crab feast is “already locked into this year,” because it’s been advertised and people have started to buy early-bird tickets,

“I simply don’t think this is the time to be having this conversation,” Niccolini said. “We would be completely open to the idea of talking about this later down the line, and eventually phasing out this tradition … but that being said, we’ve already started advertising this event.”

Yusuf Mahmood, a SETA board member, said there’s a difference between serving animal products on the campus and having “such an ostentatious or flamboyant display of killing them.”

“Just because something is a tradition, that does not mean that it is a justifiable tradition,” Mahmood stated. “We don’t think that is a sufficient reason to boil innocent creatures alive.”

Gaurav Dahal, an off-campus-outlying representative, said the bill normally passes without debate, which he thinks is a problem. He took issue with the way crabs are prepared for the feast.

“They’re being boiled alive,” Dahal said. “…Should we stay idly by as thousands and thousands of crabs are murdered? Pretty much just for our human pleasure.”

The legislature voted 21-6 with 3 abstentions to approve the bill. Funds will go toward staffing and setup as well as renting equipment and time with Testudo.

The feast will be held Oct. 11 at the North Campus Diner.