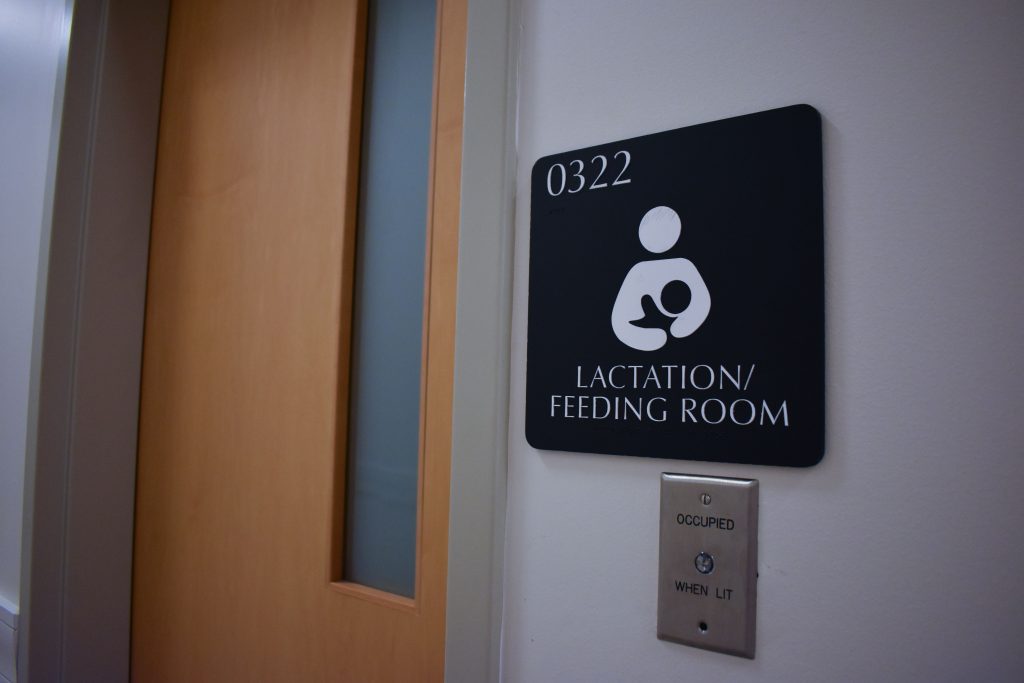 After Fiona Jardine gave birth two years ago, she noticed how inconvenient it was to pump breast milk on the University of Maryland’s campus.

There wasn’t a lactation room in Hornbake Library, where Jardine’s office was located. So Jardine, an information studies doctoral student, asked the fellow graduate students she shared the office with to leave while she pumped milk for her daughter.

It was uncomfortable to do while sitting in an office chair, and Jardine also had to wash her pump in a public restroom sink, since the office didn’t have its own.

Now, Jardine has helped to develop a university-wide survey that will assess whether more lactation rooms are needed on the campus, and how aware students, faculty and staff are of the ones that already exist.

In her seventh year on the campus, Jardine counts herself lucky compared to students and staff who don’t work near a lactation room, or have access to their own office.

Since Jardine’s daughter was born, more lactation rooms have been added around the campus, including in Hornbake. There are 16 rooms total, according to the university’s online map, although one in Cole Field House is closed while the building undergoes construction.

The survey — which was approved Wednesday by the Institutional Review Board, an administrative body that reviews surveys with university participants to ensure they meet ethical and privacy standards — will ask campus community members about their breastfeeding needs and their feelings on the current facilities.

Tetyana Bezbabna, the assistant director for undergraduate programs at the information studies college, is usually able to pump in her office at this university’s Shady Grove campus. But when she visited the Riggs Alumni Center for a meeting in August, she was surprised to find that the building didn’t have a lactation room. She had to resort to pumping in a gender-neutral bathroom.

“I assumed because that building is so innovative and they are accepting so many people over there, they would have a room for this purpose,” Bezbabna said. “It was surprising that they didn’t.”

The university’s human resources department will work alongside the public health school to distribute the survey.

Stephanie Cork, a kinesiology doctoral student who helped develop the survey, said it will firmly attach stories and numbers to what she and other members of the public health school already know — that more lactation rooms are needed around the campus.

“That will push forward a real sense of what we need resource-wise,” she said. “How many rooms do we need? What should they look like?”

The survey will also be open to visitors to this university, Cork said.

Last year, the public health school and the President’s Commission for Women’s Issues worked together to request $100,000 from the student facilities fund for the survey and for updating some of the existing rooms. In January, the fund, managed by the Student Government Association, awarded them $42,500.

These funds supported the survey’s development and distribution, as well as the ongoing conversion of a storage room in the University’s Health Center into a lactation room, which is planned to be completed by the end of the semester.

Erin McClure, the public health school’s chief of staff, said some of the funding will also go toward holding seminars meant to educate the community on the importance of breastfeeding, spread awareness for the lactation resources available on the campus and make sure that the need for such resources continues to be discussed.

Cork called the money from the facilities fund a “catalyst” that built on years of advocacy work by groups like the PCWI to support breastfeeding on campus.

“People shouldn’t have to say, ‘I don’t know if I can feed today or work today,'” she said. “This is a part of life that the campus should be supportive of.”