“It was shocking”: How this UMD student’s couch ended up on top of a bathroom stall 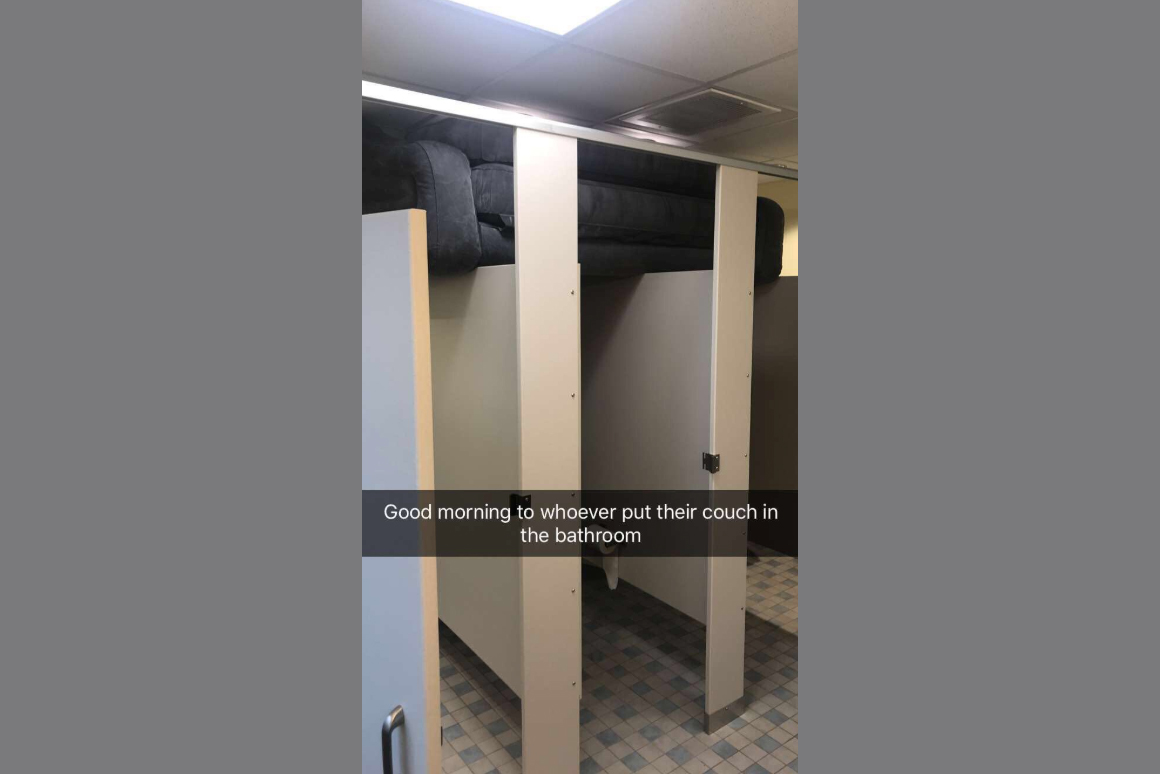 After waking up Tuesday morning, Ron Jako Domingo went to use the bathroom outside his room on the first floor of Dorchester Hall.

The freshman physiology and neurobiology major almost didn’t notice the couch resting comfortably on top of one of the stalls — until he heard the laughter of a nearby housekeeping staff member.

Domingo tweeted a picture of the scene with the caption, “Good morning UMD.” By Thursday morning, it had garnered more than 800 retweets and more than 3,000 likes.

It all started with a prank late Monday night.

Freshman history major Reid Landis accidentally left his door partially open before going to bed, and three of his hallmates decided that it was, in Domingo’s words, “too good of an opportunity to pass up.” They snuck through the open door and used their iPhone flashlights to search for a prank to play.

“I don’t know how they came up with the idea, but they decided to just take the couch,” said Domingo, who explicitly denied participating in the prank.

By the time Landis woke up the next morning, the incident was being discussed on Snapchat by fellow members of the Global Communities Living and Learning Program, which is housed in Dorchester Hall.

“It was shocking at first,” he said. “I said, ‘All right, let me start my day, let me go to the bathroom,’ and I walk in and it’s just sitting on top of the stalls, and I was too tired to get upset.”

At 9:06 a.m., North Hill Communities resident director Chelsea Bradford sent out an email to first floor residents saying that the couch placement was a violation of dorm rules. Bradford cited policies in the Community Living Handbook against behavior that could cause “risk of fire hazard,” “risk of injury” or “damage to physical facilities or furnishings.”

“The couch needs to be removed right now,” Bradford wrote. “Our housekeeping staff are not going to remove it for you and the toilets may not be able to be cleaned until it is removed.”

Gopal Mahajan, one of Landis’ roommates, wasn’t there when the couch was stolen. He first found out about it when he returned to their triple at 8:40 a.m.

The freshman computer engineering major said he was surprised by the seriousness of Resident Life’s response to the bathroom couch.

“It was a joke,” he said. “I don’t know why the administration doesn’t understand that — why they had to take this so seriously.”

But Landis admitted he sympathized with the staff who had to handle the prank.

“The housekeeping that had to find the couch on top of the toilets … that must have been a terrible way to start work,” Landis said.

Landis said that it took him and his other roommate, freshman kinesiology major Revelin Thompson, less than five minutes to remove the couch and put it back in its place after spending several hours atop the stall. He said Resident Life “responded late,” as the couch was off the stall by the time the email was sent.

Despite this incident, Mahajan said that Dorchester residents have “a sense of respect for each other.”

Landis said he’s good friends with the people who took his couch, and has known them since move-in.