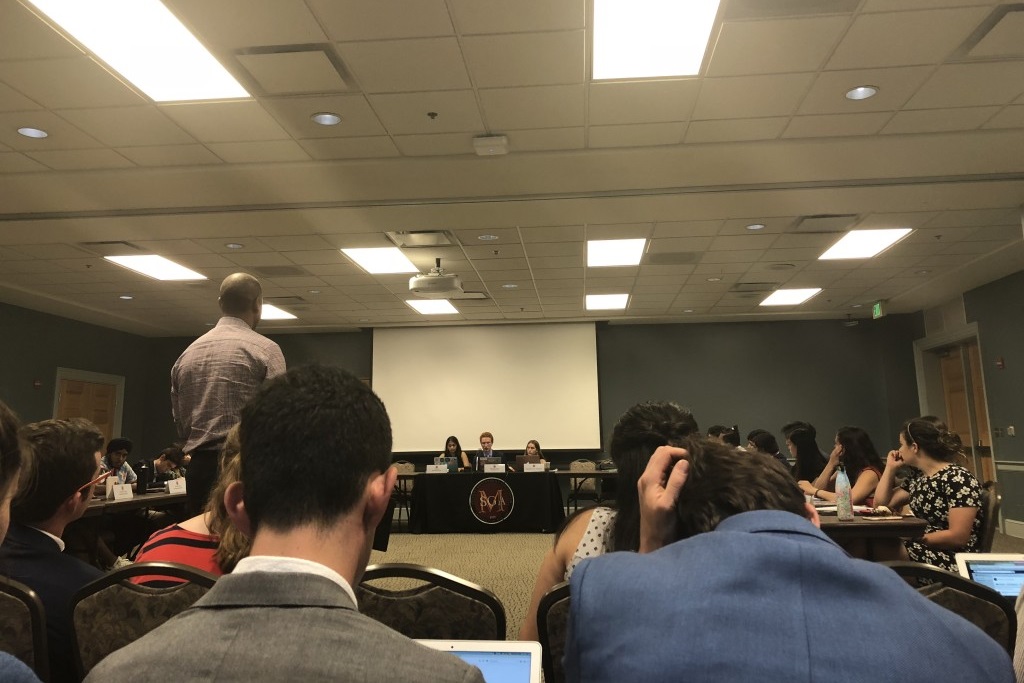 McNair, a 19-year-old offensive lineman, had trouble recovering from a set of 10 110-yard sprints — which Evans previously referred to as a “basic conditioning test” — at the football team’s first summer workout in May. He suffered heatstroke, and died two weeks later.

While all football practices are recorded so coaches are able to review and correct their mistakes for games, conditioning exercises are not, Evans said.

“There is no athletic video there of the conditioning drills that took place. We just video regular practices,” Evans responded. “That’s something that we’re going to be looking at doing now, obviously.”

In response to a Public Information Act request submitted by The Diamondback, the university declined to release video of the workout on the grounds that it was part of an ongoing investigation.

Evans did not confirm if any other videos of the workout exist or whether he’s seen them. A university spokesperson said it would “not be appropriate” to clarify Evans’ answer because “the matter is under investigation.”

Following McNair’s death, the university hired a sports medicine consulting firm to investigate the athletic department’s safety measures. The University System of Maryland Board of Regents, which sets policy for this university and the 11 others in the system, will be briefed on the investigation findings Friday, and results will be released later that afternoon.

David Rekhtman, a Student Government Association computer, mathematics and natural sciences representative, said he appreciated that Evans spoke at the forum and “recognize[d] what happened.”

“I’m glad that he’s willing to be transparent,” Rekhtman said. “It’s kind of hard because he doesn’t know all the information because the investigation is out of his hands.”

Still, Rekhtman added, he found it “surprising that he wasn’t willing to really go into specifics with any of his answers,” adding that many of Evans’ remarks were “broad, general statements.”

In August, ESPN reported that McNair had shown signs of duress at the workout and fell ill. The university has said he did not receive the proper treatment for heatstroke, which has a 100 percent survival rate when treated with cold water immersion.

Evans emphasized at the forum that decisions on how to treat players are made by state-licensed trainers and physicians, rather than university employees.

“Coaches don’t make medical decisions,” he said. “The ultimate decision to put a player back into play is up to the doctor, who is not employed by the University of Maryland.”

Evans said the athletic department has “changed the way we train and we practice” in the wake of McNair’s death by “paying close attention to the heat index” and monitoring the wet bulb globe temperature, which experts say most completely measures conditions that affect the likelihood of heat illness, and instituting cooling stations and more breaks during practices.

The Diamondback reported last month that former Athletic Director Kevin Anderson had authorized the use of university funds to pay for the legal defense of two football players accused of sexual misconduct. Evans, who notified the administration of the payment at the time, said cases “of that magnitude” should be directed to the Office of Civil Rights and Sexual Misconduct.

“There is a reason that we have that office,” Evans said. “Athletics needs to be at arm’s length. Once those things get to that point, let that process run its course, and then we need to be able to accept whatever the outcome is because of the due process that’s taken place.”

On Sept. 27, Evans will be participating in an open conversation along with SGA President Jonathan Allen, Deputy Athletics Director Colleen Sorem and Student-Athlete Advisory Committee President Abigail Bentz. The event will allow students to express their thoughts and concerns regarding the athletics program.

“Our goal is to make this a better place for our student-athletes and all students,” Evans said. “Athletics brings something special to this institution and we want to make sure that everybody can enjoy that.”