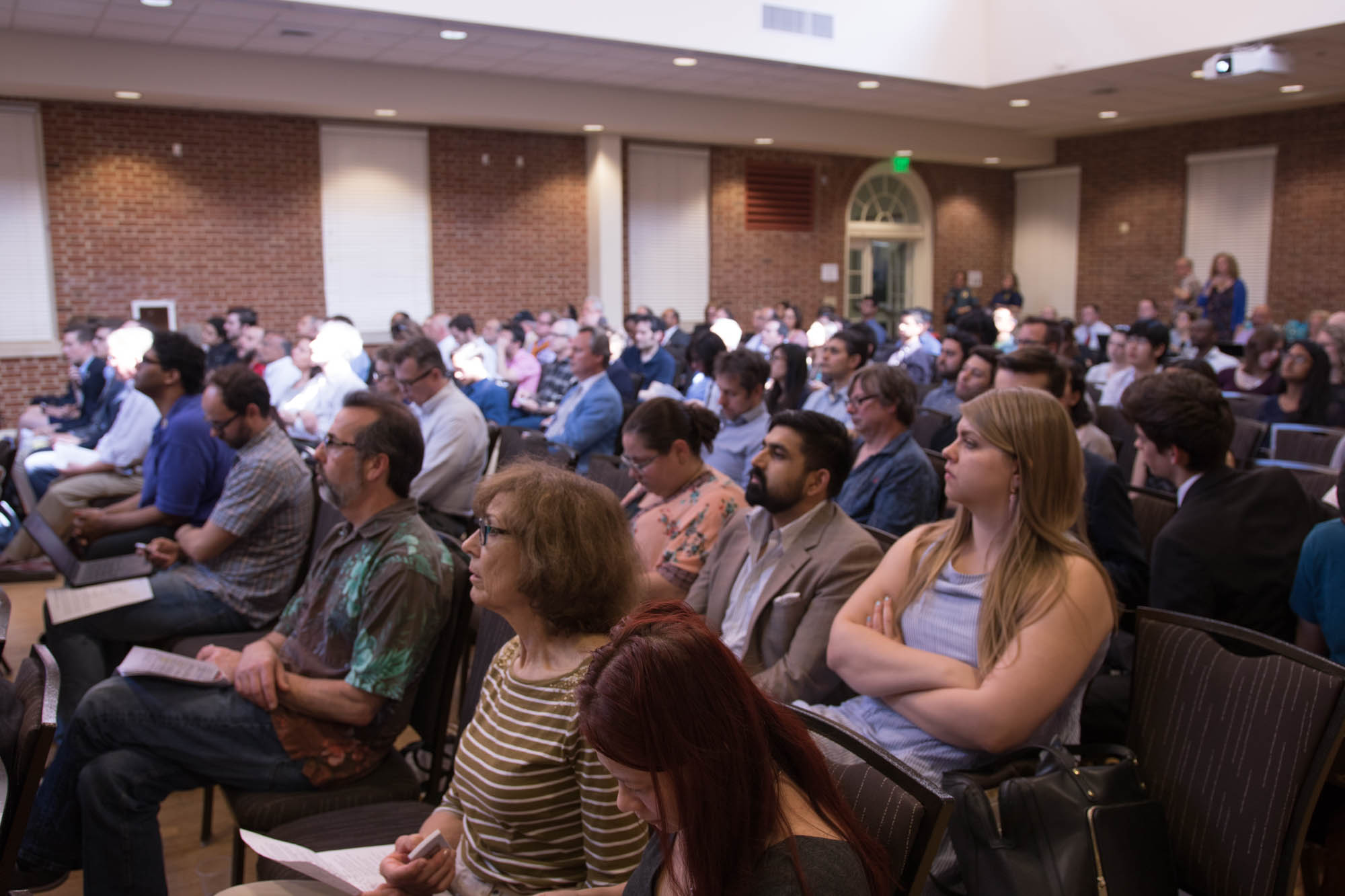 The crowd of Senators, graduate students and others listen to Senate Chair Daniel Falvey. Theis was a Senate transition meeting in Stamp on May 9th, 2018 (Richard Moglen/The Diamondback)

The University of Maryland Senate voted Wednesday to have its Executive Committee review the results of the Board of Regents’ investigation into football player Jordan McNair’s death and give recommendations to the senate and university President Wallace Loh.

The body voted 94-9-8 in its approval of the motion, which was proposed by Pamela Lanford, the chair of the committee on committees. It was proposed as new business during the meeting, and was not on the agenda.

“When we lose a student, any students, I personally feel that loss, I feel that grief, which I realize is nothing in comparison to the parents and the family of the student we have lost,” said Lanford, director of animal research support and management at this university. “I want to understand how we got here, and how we move forward.”

Lanford hopes to learn more about the culture within the football program.

“How do we fix it? How do we fix this? This is not a thing easily fixed,” she said. “I feel like we can’t fix it until we understand it.”

McNair died on June 13, two weeks after collapsing at a football team workout. In August, following ESPN reports of an abusive culture in the football program, Loh said the university accepted “legal and moral” responsibility for his death, and admitted that training staff had not properly treated McNair’s heatstroke, which experts say has a 100 percent survival rate when treated quickly with cold water immersion.

ESPN reported that McNair was having “difficulty standing upright” and had fallen ill before completing a workout of 10 110-yard sprints. After the 10th lap, Maryland head football trainer Wes Robinson reportedly yelled, “Drag his ass across the field!” as he relied on teammates to help him finish.

Head coach DJ Durkin, strength and conditioning coach Rick Court, Robinson and athletic training director Steve Nordwall were all placed on administrative leave, and the university later parted ways with Court. McNair’s parents, who have called for Durkin to be fired, hired the law firm Murphy Falcon & Murphy, which began its own review of the situation.

The senate hopes to gain additional insight into the events that led to the incident, Lanford said.

Jo Zimmerman, a senator representing public health school faculty, supported the motion. McNair, a kinesiology major, was in one of Zimmerman’s classes as a freshman.

“The whole kinesiology department lost a student, and we feel it quite keenly,” she said. “I am very carefully thinking of the student and his family’s right to privacy as they work through their grief and as this review works through their various systems.”

Junior agriculture major Harry Huntley proposed an amendment to the motion, suggesting the Executive Committee also provide recommendations to the Board of Regents. But it did not meet the two-thirds requirement it needed to pass — with a final vote of 68-39 — though no one publicly spoke against the measure in the meeting.

Senior individual studies major J.T. Stanley spoke in favor of the amendment, and noted his concerns extend past McNair’s death and the athletic department.

“While I don’t think it was as explicitly stated, [this review] will turn into an adjudication of senior leaders,” Stanley said. “However, I think we deserved that before this incident occurred, there have been so many incidents that have occurred that just haven’t gotten the attention that athletics can, and I hope we can review the leadership of this university in that capacity too.”