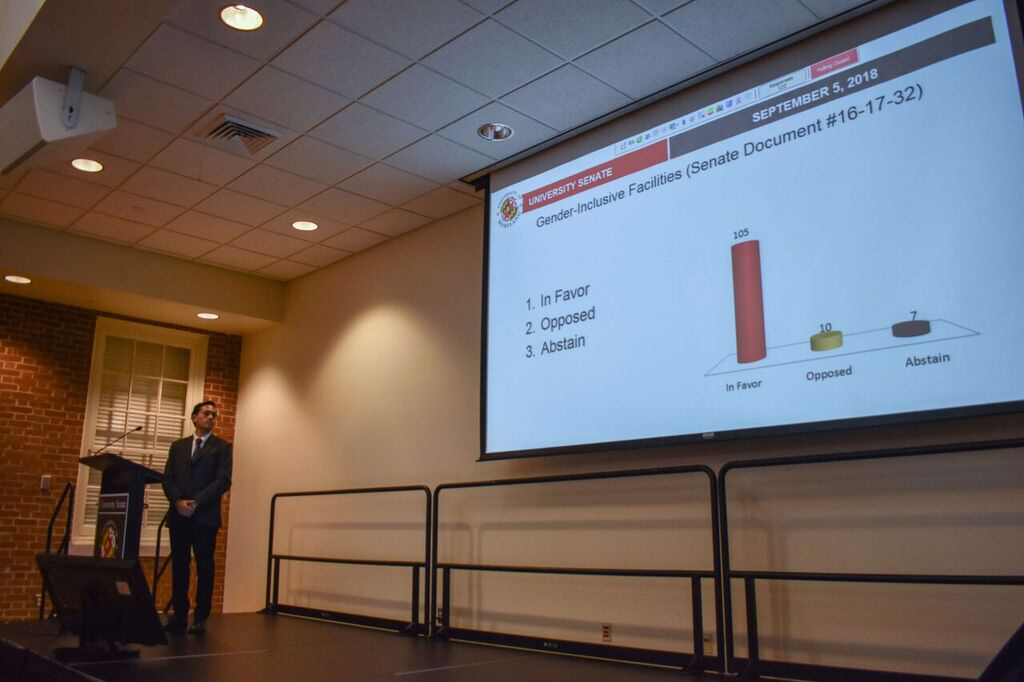 As she sits in class, Ellie Litwack realizes she needs to use the bathroom. Panic falls over the sophomore mechanical engineering major, as she considers the 10-minute walk to the nearest all-gender facility.

The internal debate ensues: miss almost half of class for what should be a two-minute bathroom break, or sit in discomfort for 40 minutes? Her GPA wins out, and for the rest of the period, she sits there, counting down the time until she can finally use the bathroom where she feels she belongs.

In a vote of 105-10 with seven abstentions on Wednesday, the University Senate approved recommendations from its Equity, Diversity, and Inclusion Committee, which included the approval of a new gender-inclusion policy and plans for changes in current bathrooms.

That means Litwack, a transgender woman, would finally be allowed to use the bathroom she identifies with, free from the fear of harassment.

“These decisions significantly and tangibly affect people, and they’re important,” she said.

While trans students are protected from harassment and bias by the university’s nondiscrimination policy and procedures, there was previously no policy that specifically protected trans students’ ability to use the bathroom they identify with, said Luke Jensen, the LGBT Equity Center director.

Phillip Staniczenko, a faculty representative from the computer, mathematical, and natural sciences college in the committee, said there are 253 single-user bathrooms around campus that will need to be changed to become all-gender bathrooms.

The early estimates of the implementation cost is about $15,000, Staniczenko said, adding that proposals were written as recommendations to consider — rather than explicit recommendations — because of their expense.

The senate approved full recommendations to make all bathrooms more accessible to trans students by changing the signage of all single-user bathrooms around campus and encouraging the university to better label and locate gender-neutral restrooms.

For Andi Galvin-Manico, a junior environmental science technology major, the lack of signage has made her trips to Eppley Recreation Center a struggle since she began her transition.

“I had to walk up and down the hall to ask different people where [the gender-neutral locker room] was,” Galvin-Manico said. “Someone finally knew, and it was because they were queer, and they only knew because they had a friend who used it.”

In addition, the new bathroom signs will indicate what is in the bathroom — depicting a toilet or a urinal, for example — instead of using human figures to denote who can use it.

“We don’t need stick-men and stick-women,” Jensen said. “There just needs to be better signage.”

The approval of the recommendations show this university’s commitment to diversity and inclusion, he added.

“We’re doing what we can to create a healthy, welcoming and supportive campus,” Jensen said. “We want everyone to be a success story, and now they can be.”

University President Wallace Loh must approve the recommendations before they can go into effect. The senate will check in on the implementation process in fall 2019.