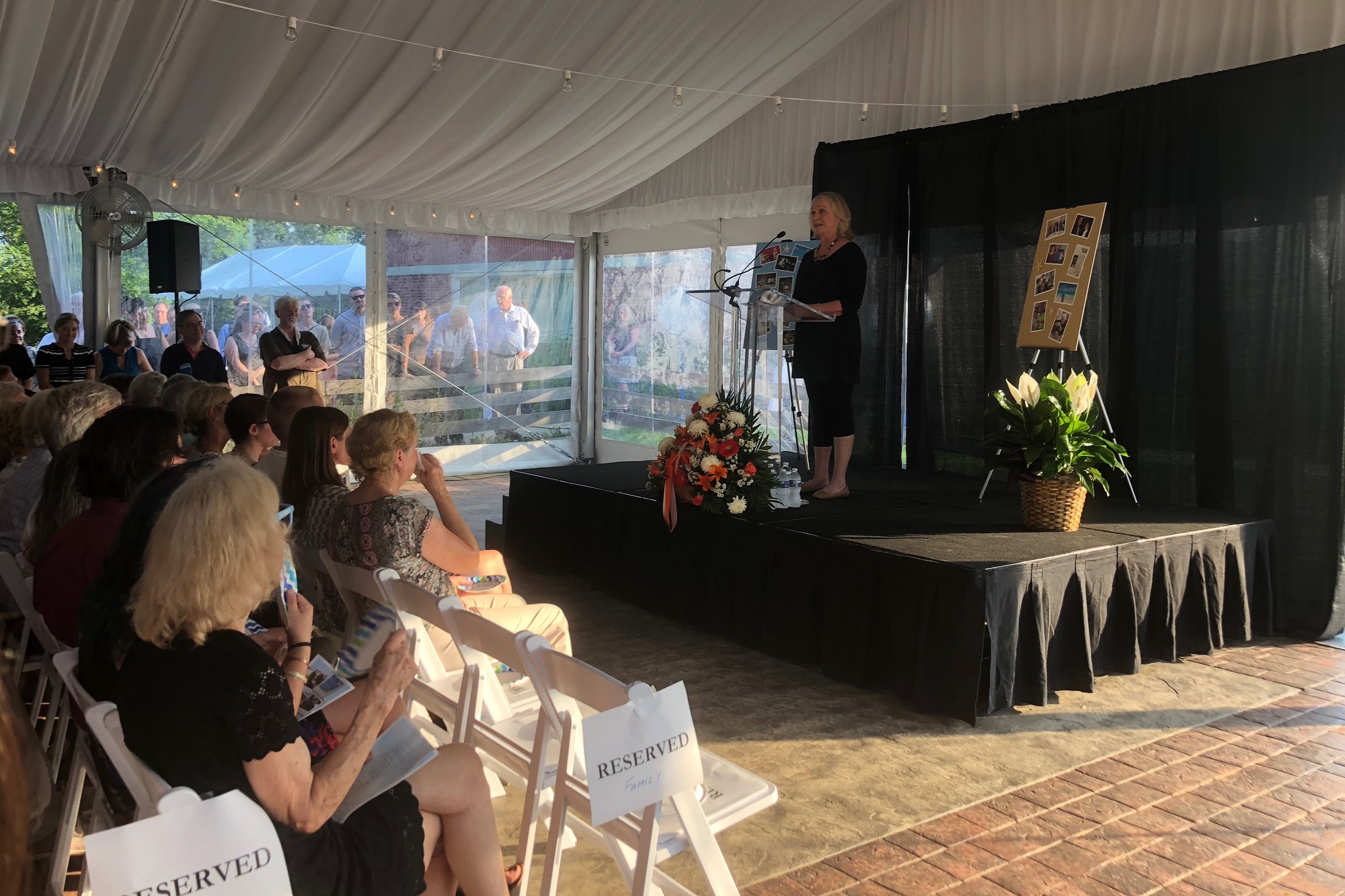 With night beginning to fall, a column of slow-moving cars occupied Garrison Forest Road in both directions, as mourners descended on Irvine Nature Center in Owings Mills.

Despite the 90-degree heat and typical July humidity, about 500 people attended Monday’s memorial service for Rob Hiaasen, a longtime editor and columnist at The Capital and a journalism lecturer at the University of Maryland.

Hiaasen, 59, was one of five people killed last week when a gunman opened fire at the Capital Gazette’s newsroom in Annapolis — a targeted attack against the paper, according to police.

Through eulogies, poems and songs, Hiaasen was remembered as a loving husband, a dedicated father and a passionate journalist. In the words of former coworker Kevin Cowherd, Hiaasen was “a big man who needed to laugh the way he needed oxygen.”

The turnout far exceeded the estimation of 200 guests expected just a few days before, said Jean Suda, neighbor to the Hiaasen family.

Mourners gathered in a white tent outside the nature center, chosen as a nod to Hiaasen’s love of the outdoors. Along with programs, small paper plates were passed out to be used as fans in the scorching heat.

With James Taylor’s Carolina In My Mind drifting through the speakers, those who could find a seat sat down; those who couldn’t instead gathered in throngs along the aisles, some spilling out of the tent.

Suda opened the service by sharing Hiaasen’s nickname, “Big Rob,” and pulling out a stuffed shark, affectionately named “Sharkie”. Hiaasen had always loved the ocean; he even had a role as an extra in Jaws 3-D.

“Sharkie is here to remind us of the quirky nature of Rob’s character,” said Suda.

Hiaasen’s daughter Hannah spoke of the origin of her father’s nickname, which was more than a commentary on his height.

Hiaasen’s siblings remembered him as a jokester and playfully referred to him as a liar.

“Rob was a seamless prevaricator,” said novelist Carl Hiaasen, Rob’s brother. “When he wanted to be, when it suit him.”

Carl recalled Rob stealing his records and returning them with scratches, denying he ever used them until one day Carl caught him in the act. Rob looked Carl in the eye and still denied that he was using his record.

Cowherd, a former Baltimore Sun sports and feature columnist, recalled how Hiaasen was “stuck” sitting next to him on his first day in the newsroom. Cowherd described Hiaasen as a writer “drawn to the gritty and eccentric,” a “jack of all trades” who could write about anything.

Hiaasen had begun teaching at this university in the spring, with one class of JOUR320: News Writing and Reporting II: Multiplatform. His wife, Maria, said he enjoyed being referred to as “Professor Hiaasen.”

“To no one’s surprise, Rob turned out to have a wonderful gift for teaching,” Cowherd said. “His students loved him, his fellow teachers loved him, administrators loved him.”

David Jahng, a former student of Hiaasen’s, said that he teared up a few times during the memorial.

“So much of what I knew was true,” said Jahng, a rising senior journalism major, referring to Hiaasen. “How great of a person he was and just how so many people will remember him is an amazing takeaway from today.”

Teresa Johnson, another former student in attendance, said it’s been hard in the wake of the tragedy.

“It’s strange … A few months ago, we said goodbye to him in the classroom,” said Johnson, a rising junior journalism and studio art major. “I didn’t think we’d experience ‘seeing’ him in this setting and in this way reflected through these people.”

Cowherd expressed his admiration for Hiaasen’s commitment to journalism despite the turbulence gripping the industry.

“In this day, when journalism is under such constant assault, when the hostility toward men and women who work in newsrooms has never been higher,” Cowherd said, “Rob was telling these young people at College Park, ‘Hey, we need you out there.'”

Maria Hiaasen recalled how the Baltimore Sun Media Group, which owns The Capital, had given her husband a T-shirt that read “Journalism Matters.” While the shirt was too small for him to wear, he had left it out in a prominent spot in their bedroom, where anyone walking by could see the phrase emblazoned on the front.

“And now, after all this, I’m gonna read it as a sign,” she said. “Journalism matters. We have to educate the nation. … We have to protect this democracy so journalists can fight the good fight.”

Judy Hiaasen, Rob’s sister, tearfully ended her eulogy by expressing gratitude to her fellow Hiaasens and all in attendance, as a soft golden light shined onto the front row of chairs where his family sat.

“All I see and all I feel is Big Rob love,” she said. “May you build a ladder to the sky and climb on every rung and may you stay forever young.”

Maria said the memorial ended up being exactly what her husband would’ve wanted.

“He believed in fun,” she said. “That sounds inane, that sounds ridiculous, but as we saw [with the shooting] the world is an ugly place, so we have to find the pleasure where we can.”

As the eulogies finished, mourners coalesced around fans spraying water, sharing their memories of Hiaasen amid the sweltering summer heat. It was a fitting conclusion to the memorial for a man who tried to enjoy everything life had to offer.

CORRECTION: Due to a reporting error, a previous version of this article and its headline misquoted Judy Hiaasen as saying “forever loved.” Hiaasen had referenced the Bob Dylan song “Forever Young.” This story has been updated.