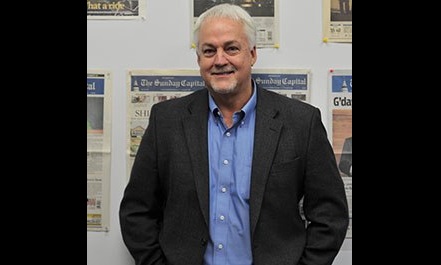 Rob Hiaasen, an assistant editor and columnist for the Capital and a journalism lecturer at the University of Maryland, died Thursday after a shooting at the Capital Gazette. He was 59.

This is so sad. Rob taught for the first time this spring. Feedback: He was a natural. Students loved him. Patient. Caring. And damn good. https://t.co/SgaqgbXu79

Hiaasen was one of five fatalities after a shooter opened fire in the publication’s newsroom Thursday afternoon, according to police. Reporter Wendi Winters, sales assistant Rebecca Smith, editorial page editor Gerald Fischman and staff writer John McNamara were also killed, and several others were injured. Fischman and McNamara were University of Maryland and Diamondback alumni.

Hiaasen taught one class of JOUR320: News Writing and Reporting II: Multiplatform at this university in the spring. He was slated to teach it again in the fall.

After reporting with The Baltimore Sun for 15 years, Hiaasen was hired at the Capital in 2010. A University of Florida graduate, he also worked at The Palm Beach Post and various radio stations in the South, according to his Capital Gazette biography.

The Timonium resident was known for his love of James Taylor, and people that knew him recall his goofy storytelling, The Baltimore Sun reported.

Sickened to hear that Rob Hiassen was among those killed today in the Capital Gazette shooting, according to TWP: https://t.co/bLLwXoHcJc A wonderful human being, journalist and journalism teacher. #RIPRob @merrillcollege

The suspect has been identified as Jarrod Ramos, 38, of Laurel. He filed a lawsuit against the paper and a columnist in 2012, and a Twitter account in his name — with the columnist, Eric Hartley, featured as the account’s avatar — tweeted “”F— you, leave me alone” just before the shooting, The Sun reported.

Anne Arundel County Police confirmed the attack was targeted at the Capital’s newsroom.

Capital crime reporter Phil Davis, who was in the building, tweeted updates throughout the day.

“There is nothing more terrifying than hearing multiple people get shot while you’re under your desk and then hear the gunman reload,” Davis wrote.

Anthony Messenger, a rising senior at Salisbury University and a Maryland, Delaware, District of Columbia Press Association intern at the Capital, first tweeted at 2:43 p.m.