Coaching brotherhood: Maryland men’s lacrosse coaches past and present have a unique bond 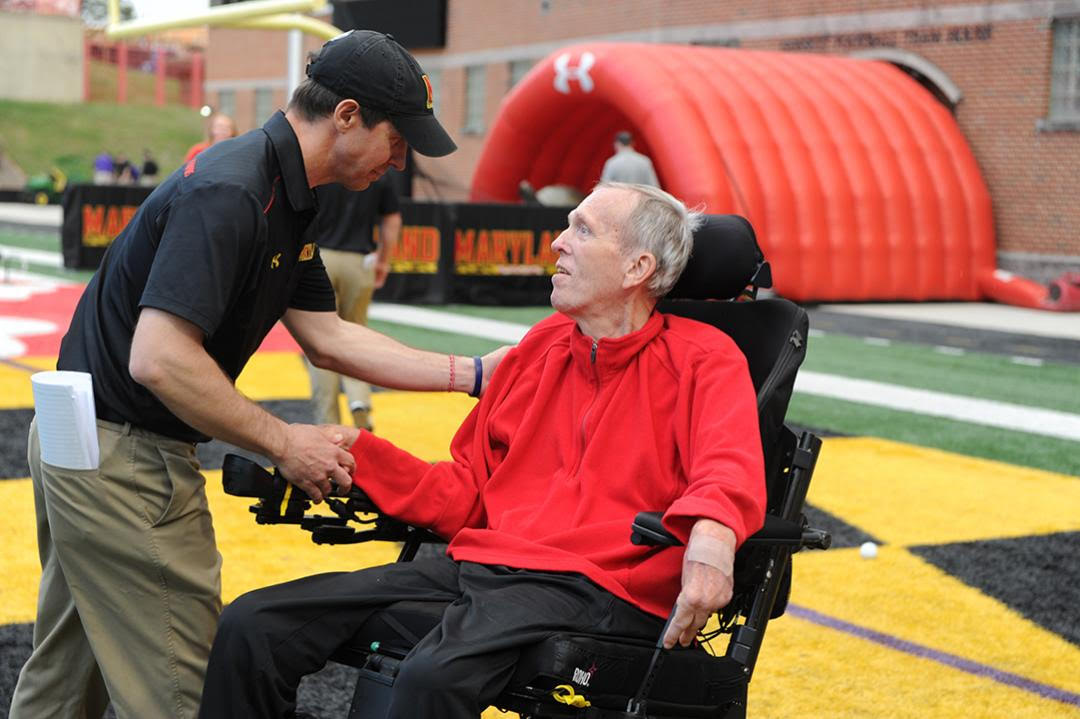 As he watched Albany coach Scott Marr on the sideline of Maryland Stadium on March 10, former Maryland men’s lacrosse coach Dick Edell thought back to the 1995 NCAA tournament semifinal against Johns Hopkins. Marr was Maryland’s offensive coordinator at the time under Edell, who was skeptical entering the rivalry game.

The “Big Man,” as Edell became known in College Park, helped No. 4-seed Maryland secure a spot in the championship game with a 16-8 win over the top-seeded Blue Jays. Yet he believed with the success the Blue Jays had, and with the Jays having goalkeeper Jonathan Marcus between the pipes, Maryland shouldn’t have won the game.

As Marr and the Great Danes warmed up, Edell watched from suite 2144, amused by his wife Dolores referring to Marr, who is in his 60s, as “a great kid.” But he knows Marr will always be one of his kids, Edell said.

The longtime coach said the same is true for Tillman, one of Edell’s successors, who paced the opposite sideline from Marr that March day, a season removed from helping the Terps end a 42-year championship drought. With personal connections to both teams, Edell had difficulty choosing which team to root for.

“I can’t really lose,” said Edell, who died May 2. “I’ll have mixed emotions no matter what happens.”

Before Edell passed, Marr spoke to the Hall of Fame coach about once a week, and Tillman did so monthly, seeking advice from the veteran who led Maryland to 13 NCAA tournament appearances. Former Maryland coach Dave Cottle sought guidance from Edell about twice a month.

To maintain the program’s elite status, the coaches remained connected, helping Maryland stay a lacrosse powerhouse. The dialogue between past and present, which the three said is unique to Maryland, remains as the No. 1-seed Terps begin their quest for consecutive championships Sunday against Robert Morris.

When Cottle was a junior at Salisbury, Edell was coaching at the University of Baltimore. And when Cottle’s Sea Gulls played the Bees, Edell gushed about Cottle’s athleticism, which stuck with Cottle. Edell had a knack for remembering everything about a player’s life.

Once Cottle began his coaching career, he and Edell were occasionally on competing sidelines. Cottle immediately became aware Edell was universally respected and admired.

So Cottle began connecting with Edell for advice during his tenure at Loyola. On a trip to Notre Dame, a player on the team was caught carrying an illegal substance. The Monday after the game, Cottle called Edell. Edell remarked the moral of the story was not to fly to away games, an example of Edell’s distinct and light-hearted approach to handling groups of 18- to 22-year olds.

“Coach Edell … knew how important toughness was,” Cottle said. “They recruited tough kids. The toughness meter went up the longer I was recruiting at Maryland.”

Edell similarly recruited Tillman out of Corning West High School in New York in his junior season, and though the pair’s phone conversation didn’t result in Tillman playing at Maryland, Tillman often sought Edell’s insight. He first watched Edell in action while working Maryland camps as a member of the Navy coaching staff.

The culture Edell brought to the Terps’ locker room is one Tillman aimed to replicate when he was hired.

“People appreciated the fact he cared about them,” Tillman said. “He never made himself bigger than the program. Those are things I wanted to try and emphasize. It makes for a healthy culture.”

Tillman’s conversations with Edell became more frequent every spring, when he attended games and emailed Tillman with observations, or just to check in.

After Tillman secured his 100th career win Feb. 21, Edell praised the job he’s done since taking over the program. Tillman credits his success at Maryland to that support system.

“[Former coaches] shared some things with me that maybe other coaches wouldn’t have,” Tillman said. “If they didn’t provide that, I would have had to learn purely through my experience. They saved me some losses or some adversity or some challenges.”

The coaching network remains valuable in Tillman’s eighth season. Cottle has proven to be a valuable resource after resigning in 2010, and Tillman exchanges text messages with him weekly.

Eager to help with the transition, Cottle began providing insight to Tillman quickly. Maryland struggled toward the end of Tillman’s first season, losing its final home game to Colgate. So Tillman told Cottle to speak to his old team before its NCAA tournament contest against North Carolina. It was just Cottle’s second time back on campus since leaving the program, the first being to help his daughter move in. Cottle’s speech to his former team helped Maryland advance to the national championship.

Now, Tillman approaches Cottle with general questions about his team. In return, Tillman discusses the Major League Lacrosse draft and teams with Cottle, who’s now the general manager for the Chesapeake Bayhawks.

“I have a tremendous amount of respect for [Tillman] as a coach and as a man,” Cottle said. “He doesn’t need to hear it from me after the wins. If something goes wrong, I’m going to be there for him. I know where you’re at and I know what you’re feeling.”

‘Help you with Saturday’

Before Maryland faced Johns Hopkins in the Big Ten tournament, it warmed up in shirts that said “Big Man” to honor the late Edell. The Terps dropped the contest, 13-10, and fell just short of a Big Ten tournament title.

Now, Maryland aims to replicate its 2017 postseason success with imprints of the same coaching network in place. Edell once told Tillman, “I can help you with Saturday, but I can’t help you with Monday,” alluding to the fact he never won a national championship — held on Memorial Day every year.

With the guidance of Edell, Cottle and other former coaches involved with the program, though, Tillman figured it out.

“There were fingerprints of all those guys on that trophy,” Tillman said. “They impacted every aspect of our program … I don’t believe we do it without all their support. Maybe it took all of that to get us over the top.”