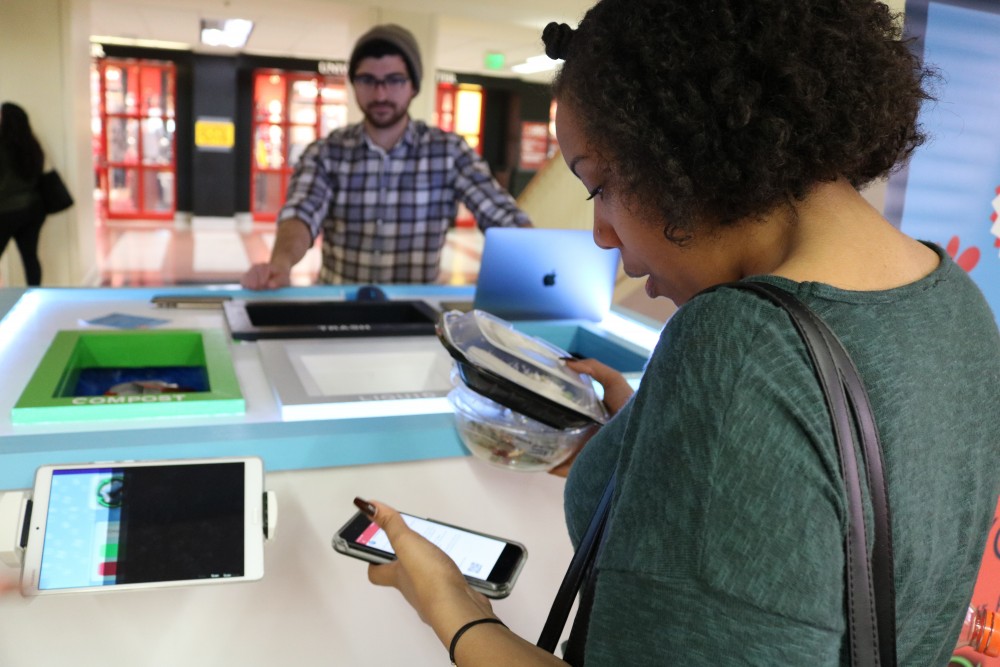 Three University of Maryland students are developing an app that aims to incentivize recycling by rewarding those who properly sort their waste with points redeemable at Stamp Student Union.

The app, called Recyclify, aims to inform students whether disposable items should be sorted into recycling, trash or compost bins, said senior Ardalan Djourabtchi, the app’s co-founder. The design launched in fall 2017, and Djourabtchi, along with freshman Jason Malkofsky-Berger and junior Chris Langreo, are testing it at Stamp this semester.

“We just want to show each user that their recycling makes a real difference, that it has an environmental impact,” said Djourabtchi, an economics major. “It’s not just a chore.”

The students installed a prototype “smart bin” in Stamp’s food court to complement their app. The bin features trash, recycling and compost containers, as well as a container for disposing liquids. It also has an attached tablet, which lets students know where their waste belongs, and a light indicating if it was sorted correctly.

Students earn a point for each item they sort into the correct container, Djourabtchi said. Three points can be redeemed for a free scoop of ice cream from the Maryland Dairy, while six points gets a free Chick-fil-A sandwich, said Langreo, a computer science major.

Students can also track their recycling behavior through an ecological footprint calculator in the app, the Recyclify team said.

The students developed the app in an effort to reduce waste contamination, which occurs when materials are not properly sorted into the correct waste container.

[Read more: A revamped electric car charger is UMD’s Invention of the Year]

“A lot of [students] come up and they’re like, ‘I have no idea what to do whenever I go up to recycle,'” said Malkofsky-Berger, a marketing and operations management and business analytics major. “They really like that our system told them exactly what to do, and then, of course, they like being rewarded for it as well.”

According to a 2017 analysis, about 54 percent of the material in Stamp’s recycling bins is not recyclable, Facilities Management Recycling Specialist Adrienne Small wrote in an email. In contrast, the Recyclify team’s “smart bins” contain only about 8 percent contamination, Djourabtchi said.

Stamp’s waste bins are currently labeled and feature small pictures representing what kinds of waste should go in each, but Langreo said many students don’t pay attention or wouldn’t actively try to recycle properly without a rewards system.

Freshman bioengineering major Matthew Brandon said that he thinks the app will encourage students who don’t recycle often to pay more attention to their waste habits.

“The effort to throw a plastic bottle into the recycling bin as opposed to the trash can is no different for any of us to do,” Brandon said. “I think [the app] shows that we’re moving in the right direction towards valuing small efforts that we can all do in our daily lives.”

However, Brandon added that it may be hard to attract the initial audience needed to kickstart the app.

“The problem I see happening is that the audience for this app would be people that don’t recycle correctly, but getting them to get this app becomes another issue in itself,” he said.

The Recyclify team was one of six finalists for this year’s Do Good Challenge, which highlights student groups who promote social change, according to the Do Good Institute. On Tuesday, the team placed third in the competition’s ventures category and was awarded $1,000.

The Recyclify team received about $1,400 from a sustainability fund mini-grant, as well as $500 from the Do Good Grant, said Daniel Wray, assistant director of facilities for Stamp. Wray added that he thinks the Recyclify team has made good use of the grant money, which they spent on the handmade recycling station.

“They’re excellent stewards of their money — they’re really making it go a long way,” Wray said. “[Recyclify] is a remarkably innovative program, and it’s just been tremendous in bringing awareness to this very important initiative.”

Next semester, the Recyclify team aims to launch the app to the public and replace more recycling bins at Stamp with “smart bins.” Looking into the future, the team said they hope to create a profitable business by selling the “smart bins” to this university and by allowing businesses to pay for promotional advertising on their app.

“I’m just really excited to see what lies ahead of us as a company,” Langreo said. “We’re tackling a really big problem with an innovative solution, so I’m just hoping that we can scale as much as we’d like to so that we can create the best environmental impact that we can.”