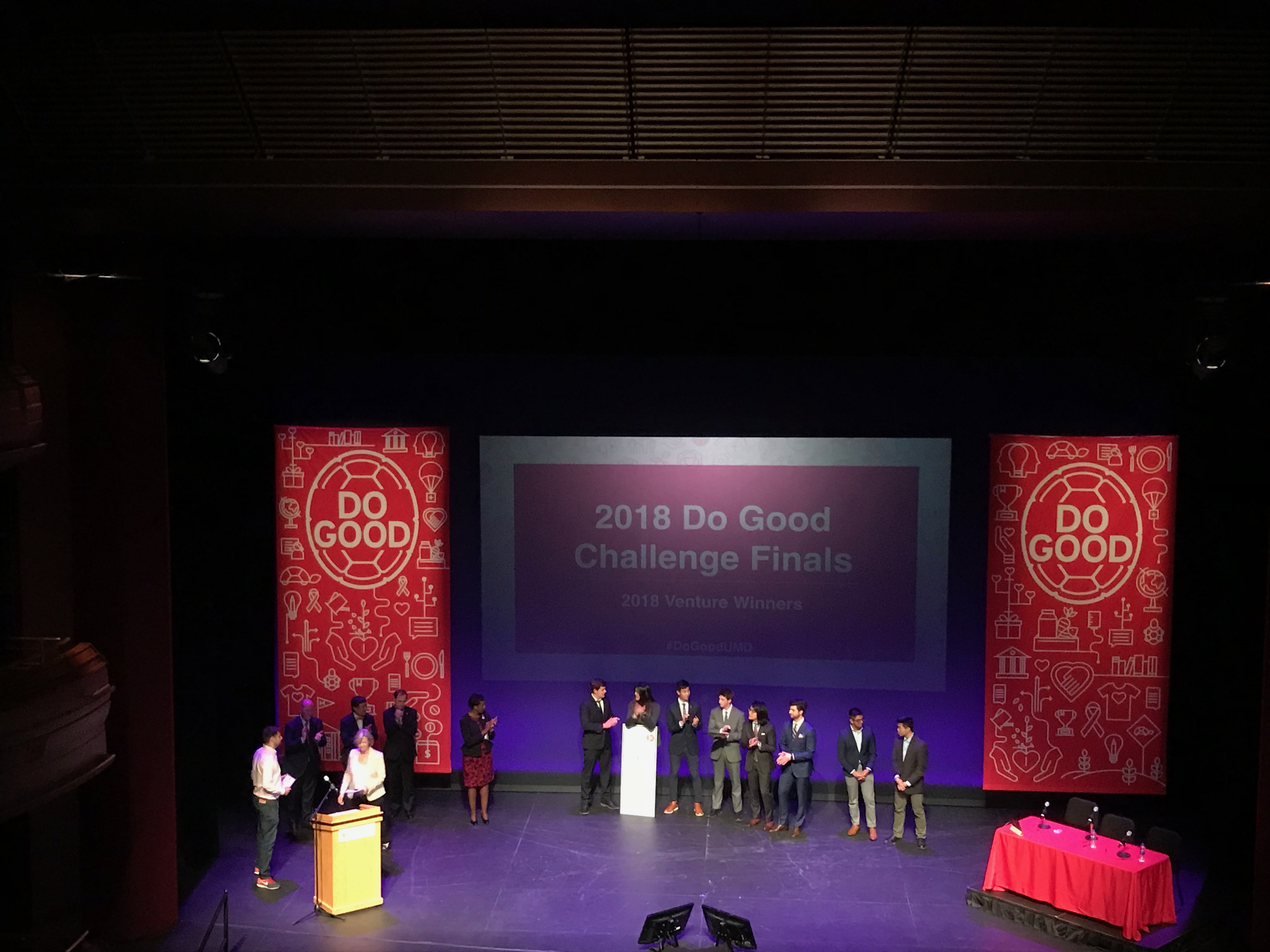 The event, which saw more than 500 attendees, awarded a total of more than $20,000 to eight philanthropic student projects and organizations in two categories. Terp Thon, which raises money and awareness for Children’s National Health System, won the projects category, while Symbiont Health, a service detecting falls for elderly people, won the ventures category.

Terp Thon plans to use the money to network with leaders of other student groups at this university and further their campus reach, said Kate Burgess, the group’s Greek relations chair.

“Through our efforts, we are not only making a difference at Children’s National, but making a difference here on campus,” said Terp Thon external director Amara Fox, a junior public health science major. “We are building a community of passionate student leaders who are able to further champion our cause and increase our impact.”

Symbiont Health, which is run through this university’s public policy school, is working on an alert system that detects falls within a radius of approximately two rooms through motion sensors. It aims to help elderly people who may pass out or experience seizures or falls by sending an alert, similar to Life Alert.

Erich Meissner, one of the group’s founders, said he was inspired to develop the device after his grandmother fell, breaking the crown of her hip and having to crawl to reach a phone.

“I wanted to help her,” he said. “Now, we have learned that we can expand our impact to Terps everywhere and families around the world.”

Symbiont Health plans to use the money to further their research and develop and expand their product.

The Do Good Institute also awarded Scholars Promoting and Revitalizing Care — a student well-being advocacy group — $2,500 for placing second in projects, and an additional $2,500 for winning an audience’s choice award.

SPARC president Anthony Sartori said the group is planning to use the money to fund resiliency training to teach campus community members, including residence assistants, how to recognize and assist students who may need help.

“In a little under two months, we fundamentally changed the culture regarding mental health on this campus, but so much more must be accomplished by us and the university before we can proudly say we make mental health a priority,” the senior psychology major said.

A student organization that delivers healthy foods to pregnant women, called Nourish: Mommy and Me, placed third for projects and received $1,000.

In the ventures category, Synapto — a biotech company working to develop portable machines that monitor brain activity to allow people to test for Alzheimer’s — placed second and won $2,500, while Recyclify, an app to encourage students to properly recycle, placed third, winning $1,000.

The event was held in the Clarice Smith Performing Arts Center. Semifinalist groups set up tables before the event to share their ideas with attendees, each of whom received two tickets to give to the group of their choice. The two semifinalists with the most tickets gave a presentation the audience then voted on, through text messaging.

Semifinalist groups Flush X, which is working on an automatic flushing toilet that avoids unnecessarily flushing, and Preventing Sexual Assault were awarded $750 and $500, respectively. Of the nine semifinalist groups, they were the only two to receive a monetary award.

“It’s really cool to see what they’ve been working on and this competition gives them the opportunity to present their ideas and find a way to fund their ideas,” said sophomore government and politics and international business major Nadine Eloseily.