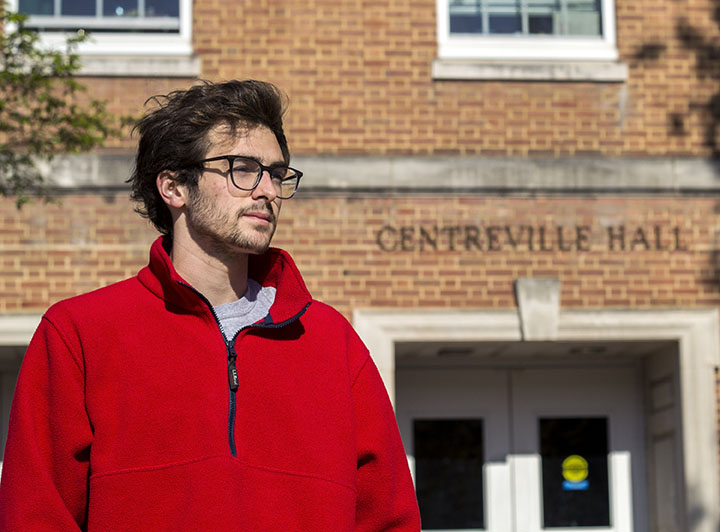 Senior psychology major Anthony Sartori is the president and founder of SPARC, a group focused on the wellbeing of students on campus. Sartori lived in Centerville Hall on North campus as a freshman, and acknowledged the distance between existing counseling centers and North campus residents. (Julia Lerner/The Diamondback)

During his sophomore year, University of Maryland student Anthony Sartori experienced a panic attack, but he had no idea.

In the middle of a drive home from the grocery store with a friend, Sartori became convinced he was having an allergic reaction to the passion fruit juice he was drinking.

“At that moment, I pull the car over and I slam on the brakes,” he remembered. “I get out of the car. … I literally crumple to the sidewalk, and I’m sitting there rocking back and forth.”

He felt like he was separated from his body. He couldn’t breathe or move his arms. But after a visit to the hospital, tests conclusively proved he was not experiencing an allergic reaction.

Sartori said he didn’t recognize at the time that what had happened was emblematic of mental health problems.

“I didn’t know what the hell a panic attack was,” the senior psychology major said, adding that it can be challenging to seek help “when you don’t know what you’re going through.”

While he hasn’t officially been diagnosed with obsessive compulsive disorder, Sartori said he’s struggled with obsessive thought spirals that can cause extreme anxiety since he came to this university.

Now, he is leading a campus advocacy group called Scholars Promoting and Revitalizing Care that’s pushing for more student mental health resources. The group’s immediate goal was to place a full-time counselor in every campus dorm, but now it has adjusted its plans to advocating for a satellite counseling center on North Campus, Sartori said.

This university’s mental health care providers — the Counseling Center, housed in the Shoemaker Building, and the Health Center, located across the street from Stamp Student Union — are both on South Campus.

The new plan would be more practical in terms of funding and logistics, he said, and would avoid isolating counselors from their coworkers. Still, SPARC would like to see a counselor in every residence hall in the future once the resources become more established on North Campus, he added.

Zoe Rader, a freshman government and politics and journalism major who lives in Cumberland Hall, said the distance between North Campus dorms and the Counseling and Health centers could “sway students away” from seeking help.

“[North Campus residents] are predominantly freshmen — we need the most help,” she said, adding she would be more likely to consider seeking help if the resources were more accessible.

SPARC is advocating for the additional counseling resources to go in an empty space above the new dining hall planned to be built on the Varsity Practice Fields across from the Ellicott Community.

Student Affairs Vice President Linda Clement said the current plan is to give that space to living and learning programs, and no plans to establish a satellite Counseling Center on North Campus currently exist.

The Counseling Center is focused on staffing its current location instead, director Sharon Kirkland-Gordon wrote in an email.

“Our major priority is to work on hiring more psychologists and address our service demand issues. All of our efforts are dedicated to this need. Space is at a premium on campus and I am not aware of any plans for a satellite operation,” she wrote.

Resident assistants and professional Resident Life staff at this university receive training — some of which comes from the Counseling Center — on how to approach mental health issues among students, said Tracy Kiras, a Resident Life spokesperson.

Each resident director — full-time professional staff members responsible for managing an entire residence hall or area — is also paired with a counselor in order to provide an open line of communication between students who may be struggling, dorm staff and professional resources, Kiras said, adding that she thinks the current system is more practical and beneficial than SPARC’s proposal.

“If everything is at their fingertips … then it does become more challenging to navigate through and figure these things out after college,” Kiras said.

Clement also said she was concerned that placing counselors in every residence hall would cause privacy concerns.

“You can walk into Shoemaker Building right now, and there’s a classroom in there, and there’s other services — nobody knows what you’re walking in there to do,” she said. “But if you have a counselor stationed in a residence hall, it’s in a public space. And people are gonna be able to know who’s visiting for that purpose.”

“I think that we underestimate the resilience of our students and their ability to solve problems,” she said. “They may not need a counselor on the spot. What we want them to do is develop their own capacity for addressing their issues, for solving problems.”

“It’s important to recognize that a lot of students haven’t developed the coping skills to really handle a lot of the issues on their own,” Sartori said. “And I was one of those students. I struggled and suffered in the dorms, and I made it through, but there are those that haven’t.”

Joseph Seidler, a freshman criminology and criminal justice major, agreed. While “it’s important to be independent,” he said, officials’ arguments against bringing mental health resources closer to students in the name of self-reliance are harmful.

“I think that’s an argument that’s presented by older generations that think that you need to be more dependent on yourself,” he said. “I don’t think that’s a valid opinion.”

In February, SPARC began a campaign advocating for more funding to mental health resources and increased awareness of the issue at this university. The campaign is titled “30 Days Too Late,” as a reference to the length of time it can take to receive an appointment at the Counseling Center, Sartori said. The group also holds workshops aimed at helping students destress.

For Sartori, the importance of mental health advocacy spans beyond people’s time in college. This university needs to prioritize mental health care in order to prepare students for a successful and healthy life, he said.

“What we do in college, the patterns that we set for ourselves and how we take care of ourselves,” he said, “are most likely going to be what we follow for many, many years after.”

CORRECTION: Due to an editing error, a previous version of this article incorrectly attributed a quote to Sharon Kirkland-Gordon. This story has been updated.