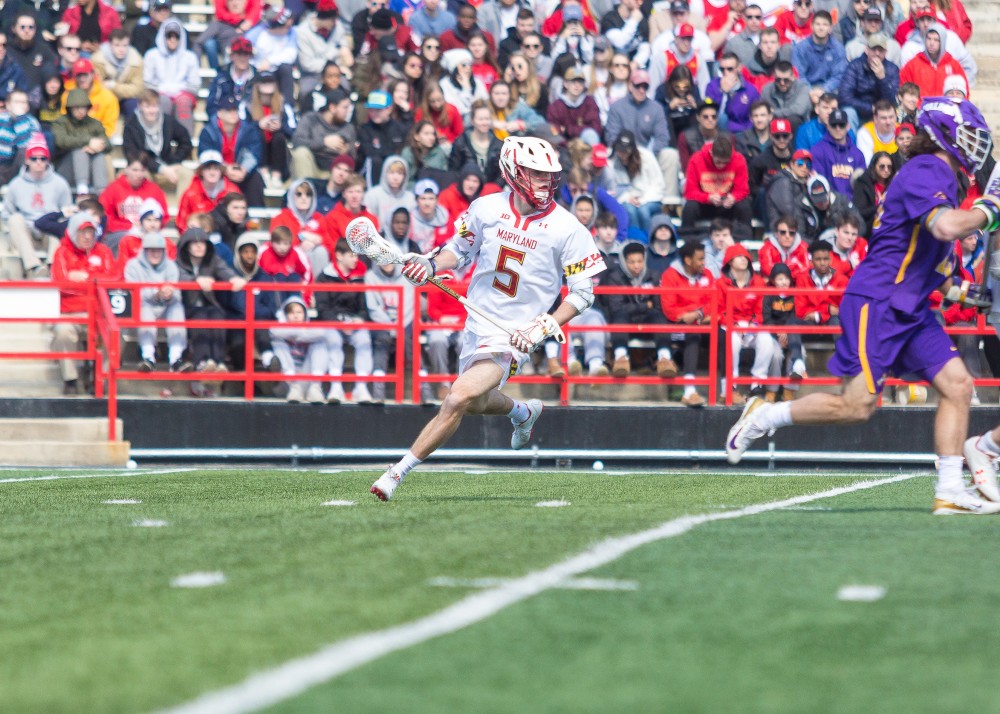 BALTIMORE — Less than a minute into the third overtime period against No. 7 Johns Hopkins on Saturday, Maryland men’s lacrosse midfielder Will Snider saw attackman Jared Bernhardt make a cut and draw the attention of Blue Jays defenders.

Johns Hopkins had contained Bernhardt and midfielder Connor Kelly from the outset of the game, holding Maryland’s top two offensive threats to a combined 0-for-24 shooting.

However, the Blue Jays didn’t send a defender to the left side of the crease to account for Snider, who entered the contest with just three goals.

Snider capitalized, firing a shot into the right corner of the net to give No. 3 Maryland an 8-7 win. Coach John Tillman and assistant coach J.L. Reppert embraced on the sideline as midfielder Tim Rotanz jumped on Snider’s shoulders to celebrate the biggest goal of the formerly seldom-used Snider’s career.

“As a West Coast kid, it’s kind of hard to come out to a hotbed area and play right away,” Snider said. “I kind of understood that going in. And then I just kind of worked my tail off, and I’m fortunate to be playing now.”

After playing in six games and not recording a stat other than a turnover in his first two years at Maryland, Snider has 10 appearances and four starts as a junior. He took advantage of the increase in playing time by scoring twice against the Blue Jays.

The Seattle native, whose brother Drew also played at Maryland, grew up thinking he had to score a goal every time he possessed the ball. But since arriving at College Park, he’s embraced his ability to dodge or find an open teammate.

[Read more: Will Snider used his brother’s example to increase his role with Maryland lacrosse]

Still, that didn’t result in much playing time. It took Snider time to adjust to the East Coast terminology and style of play, and his first career score didn’t come until this year.

He secured a spot in Maryland’s rotation this year prior to the team’s April 8 meeting with Penn State, but it wasn’t until that matchup that Snider proved he was truly comfortable in the Terps attack, Rotanz said. Snider scored twice in the 13-12 win, logging the first multi-goal game of his career.

Almost three weeks later in Baltimore, he replicated that performance.

“Now that he’s kind of learned how to play with us, he’s kind of bringing a different element of his game to the lineup,” Rotanz said. “For him to break out in a game like this is huge. It’s really going to help his confidence entering the Big Ten tournament.”

On an afternoon when Maryland’s attack appeared out of sync at times, Snider helped the Terps orchestrate a comeback.

After attackman Logan Wisnauskas made it a one-goal game with 3:32 to play, Snider intended to set a pick for Kelly on Maryland’s next possession. Instead, the defender responsible for guarding Snider double-teamed Kelly and left Snider open with 2:36 remaining in regulation. Snider found the net, tied the game and forced overtime.

As the game progressed, Snider said he changed the way he attacked Johns Hopkins goalkeeper Brock Turnbaugh. The Terps had aimed for shots lower in the net with no success, so Snider aimed for the top half.

So, while Snider has moved away from scoring goals over the past three years, he executed his opportunities Saturday, leading Maryland to a Big Ten regular season title and No. 1 seed in the conference tournament.

“I couldn’t be more proud of Will,” Tillman said. “He had two years of development on the scout team. He’s helped us win a lot of games he has never played in.”