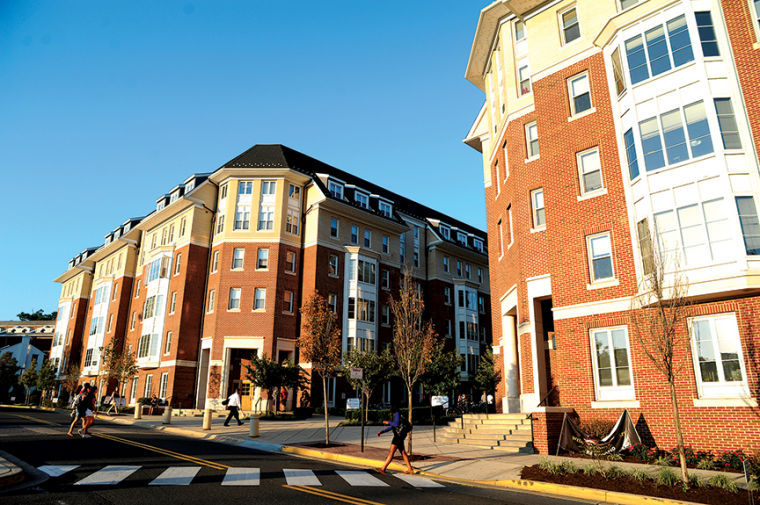 As University of Maryland student Faye Barrett prepared to return to her on-campus apartment Thursday morning, she noticed she had an email from the Department of Resident Life.

Barrett had called 911 at about 2:30 a.m. after experiencing a panic attack and taking a high dose of a prescribed muscle relaxer. The hospital discharged her several hours later, but upon opening the email and reading the attached letter, she found out she was — for the time being — barred from going home.

“When I found out, I kept crying and crying,” she said. “At that point, I was afraid to reach out to anyone.”

The letter informed Barrett that she wouldn’t be allowed to go to her room — or any other on-campus housing — until she had met with a university psychiatrist and a Resident Life case manager, and they had “made a decision regarding [her] ability to return.” The letter specified that “finding alternative lodging off-campus will be required” until both meetings had been completed.

“I have concerns about your ability to successfully manage living in a residence hall,” read the letter, which was signed by a Resident Life community director. Barrett received the message at about 4:30 a.m., roughly three hours before being discharged from the hospital.

Any on-campus student who goes to the hospital for mental health-related reasons receives the letter, said Tracy Kiras, a Resident Life spokeswoman. She said the protocol is in place to ensure that returning students do not present a threat to themselves or others.

“It’s really coming from a place of care and support for the students and their well-being,” she said.

After meeting with her psychiatrist on Thursday and a Resident Life employee on Friday morning, Barrett was cleared to return to her room. But she said the experience still shocked her.

“After something like that, you need stability and comfort,” the junior sociology major said. “And I lost that.”

Barrett said she spent Thursday night at a friend’s off-campus home, but she got only two hours of sleep. She wasn’t able to access the clothes or food she kept in her South Campus Commons apartment, and she said the uncertainty of the situation further hurt her mental health.

Barrett was diagnosed with anxiety and depression during her freshman year at this university, and she received a diagnosis for bipolar disorder six months ago, she said.

“I still am very afraid of being deemed unstable again and getting booted from my housing,” she said.

Kiras, however, described the letter and restrictions as a “standardized response” for any student who is hospitalized.

Barrett shared a screenshot of the letter and an explanation of her experience on social media. It had received nearly 500 Facebook reactions and had been retweeted more than 2,000 times as of Friday night. Since she shared her story, she added, “dozens” of current and former students have reached out to her and said they had similar experiences.

UMD Reslife banned me from even entering my apartment after I got out of a six hour stay at the hospital for anxiety & bipolar disorder. below is the letter they sent me & what happened. I want everyone to know how disgusting this is. pic.twitter.com/KVkBUMoWyh

“There’s tons of people who came to me and said that this happened and that they were afraid to speak out about it,” she said. “There’s just such a stigma still attached to it — a policy like this only adds to the fact that people are afraid of getting help.”

Laura Horne, program director at Active Minds, a national nonprofit organization that advocates for student mental health, said the formal language of the letter fails to show students that the department cares for them and could deter others from seeking help.

“It doesn’t express any concern at all about the individual,” she said. “[Barrett] experienced a panic attack, which was beyond her control — it wasn’t a conduct issue — and yet, the tone of this letter makes it sound like she’s in some kind of trouble or she’s done something wrong.”

University President Wallace Loh, who said he was not aware of the policy until after this incident, viewed the letter’s language as “very bureaucratic, very cold.”

“A university of this size and this scale, we probably need to re-look at every single one of our policies to make sure that they’re written in a way that’s much more sensitive, and if not, are expressing values that are concrete with the values that we espouse today, that they should be revised accordingly,” he said.

Kiras said that while the protocol of the letter will remain in place, her department is “committed to reviewing and revising the language of that letter to better or more clearly show that we care.”

She added that Resident Life has staff available to meet with students 24/7, so “that meeting can happen as quickly as a student wants.”

Barrett said the experience was symptomatic of a broader problem at this university.

When she first reached out for therapy and psychiatric care at this university’s Health Center during her freshman year, it took more than a month to get an appointment, she remembered. Even then, she had a limited number of therapy sessions — though she was lucky that her therapist moved off the campus so she could follow him and continue to receive care, she said.

The group has advocated for a full-time counselor or psychiatrist in every dorm to make mental health care more accessible to students.

Barrett said she’s communicated with SPARC and appreciates their work, but feels that more still needs to be done.

“[The university doesn’t] want to deal with the reality of mental health — that it causes people to be unable to go to classes, it can lead to a suicide attempt,” she said. “These are very valid diseases, and it’s not the person’s fault.”