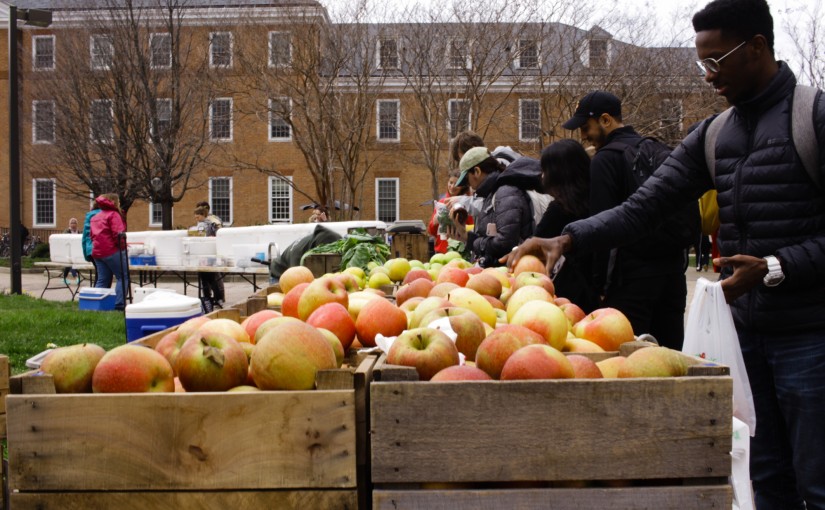 Through rain and heavy winds, the University of Maryland Farmers Market reopened Wednesday with a new location and two new local vendors.

This semester, the market moved from Caddy’s Corner of Cole Field House to the Tawes Plaza Garden due to Cole construction and more seating areas in the plaza, said Allison Tjaden, Dining Services assistant director of new initiatives.

“[Tawes Plaza Garden] is a really nice place for people to hang out, to grab food, snacks, all kinds of stuff,” Tjaden said. “We’re really looking forward to [the move].”

Opened in 2012, the market provides sustainable food and items from nine local vendors, according to the market’s website. Vendors must be within 250 miles of the campus, and may only sell items they have grown or produced, according to the website.

Chasity Hare and her mother run Country Vittles, one of the original farmers market vendors that primarily sells family-raised meat and eggs. Hare said she was “on the fence” about the new location, but hopes the change will help attract more students.

“Kids didn’t know that we were on the campus,” Hare said. “So I’m hoping that by putting us here … we can get more people to stop by because maybe it’s a little bit more convenient for going from one class to the next.”

The opening day was met with periodic rain and severe winds that knocked down goods and produce among the vendors, some of which either left early or did not set up on Wednesday.

Jerry Joyce, an owner of Schroll’s Gourmet Foods, said the Schroll sauerkraut has been a family tradition for years, but they have only been selling it for about one year.

“We never did it for anybody but family and friends,” Joyce said. “It just kinda grew to the point where we said, ‘Hey, let’s put it on the market.'”

Joyce plans to return to the market weekly and said he was confident that students at this university would enjoy the sauerkraut.

“Everybody who sampled it loves it,” Joyce said. “We’ve sold a little bit, but you know, it’s a product that people have to taste first.”

[Read more: Green Tidings is back for the spring semester — and it’s serving new food]

Junior public health science major June Solow said she shops at the farmers market almost every week. She said she enjoys Schroll’s, and that the location change is a good improvement.

“It’s just nicer to have the space to walk around,” Solow said. “Because no one is walking past you to get to class as much as by Cole, it’s a little easier.”

Senior criminology and criminal justice and psychology major Ben Weinberg shopped at the farmers market on Wednesday. Weinberg said the prices at the market are reasonable, and that more students should stop by the new location.

“I can get good, sustainably-sourced produce, and a lot of times it’s cheaper than what I can get in the supermarket,” Weinberg said. “The farmers market is great, the vendors are all great people, and I would encourage everyone to check it out.”

The farmers market will run every Wednesday from 11 a.m. to 3 p.m. until Nov. 14. Other university programs, such as the Art and Learning Center and BikeUMD, plan to table at the market later in the season, Tjaden said.