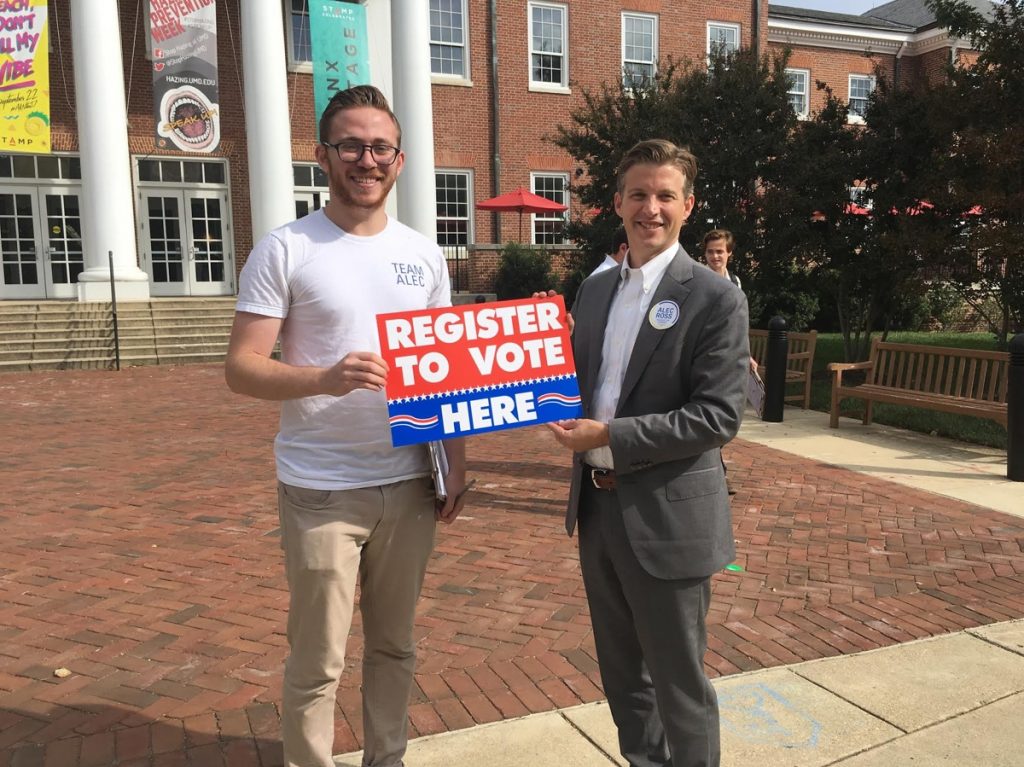 Author and tech entrepreneur Alec Ross, a Democratic Maryland gubernatorial candidate, laid out his vision for the state — including his differences with Gov. Larry Hogan on transportation and marijuana legalization, and combating the opioid epidemic — in Tydings Hall at the University of Maryland on Monday night.

In front of 15 attendees, Ross described the various ways his policies contrast with Hogan’s, including transportation and marijuana, calling the governor a “caricature of the past.”

On transportation: “We are the exact opposite,” Ross said. “We should be building 21st century infrastructure — world-class mass transit,” he added, not the $9 billion highway plan Hogan has proposed.

In September, Hogan introduced a plan to widen several state highways including I-270, I-495 and the Baltimore Washington Parkway.

“You should be able to get from College Park to Baltimore without getting in a car in 12 minutes,” Ross said, but didn’t provide specifics.

If elected governor, Ross also said low-cost broadband internet would be provided to rural areas like the Eastern Shore and western Maryland, and computer science would be offered in all schools.

Ross served as technology policy adviser for former President Barack Obama’s 2008 presidential campaign and worked as the senior adviser for innovation in the U.S. State Department under then-Secretary of State Hillary Clinton until 2013.

“Computer code is the alphabet much of the future is going to be written in,” Ross said. “I don’t want entrepreneurs in the [computer science] field to just be middle class or well-to-do white guys.”

Ross supports the legalization and regulation of marijuana in a way that is similar to policies for cigarettes and alcohol. He called for the expungement of records for individuals who have been found guilty of non-violent drug offenses.

“Marijuana prohibition has been a huge failure,” Ross said, calling the medical marijuana industry a “political giveaway.” He added, “I want to take it and make it as legal as cigarettes or beer, regulate it … and tax it.”

Posessing a small amount of Marijuana has been decriminalized in Maryland since 2014 . A state-regulated medical marijuana program was enacted in the state in 2012, and a possible constitutional amendment to legalize marijuana by a ballot initiative failed to make it out of committee in the Maryland General Assembly this session.

“We need to treat this health crisis with the level of seriousness that we treated the HIV/AIDS crisis in the 1990s,” Ross answered, adding that providing wider access to Narcan, an anti-overdose drug, and increase the use of non-opioid pain management would be a “game-changer” for the state.

“It’s great to hear that it is a focus, not just helping addicts get the help they need, but also looking for a long-term solution to solving the problem,” Williams said.

Will O’Malley, a sophomore government and politics major, said Ross’ message resonated with him, because it is an alternative to that of Hogan, whose policies he said endanger Maryland’s environment.

“I think all the [Democratic] candidates we have running right now have put forth stark contrasts to Gov. Hogan,” O’Malley said. “Any one of them would do a great job replacing him.”