Maryland women’s basketball had a successful year, but didn’t meet its lofty standards 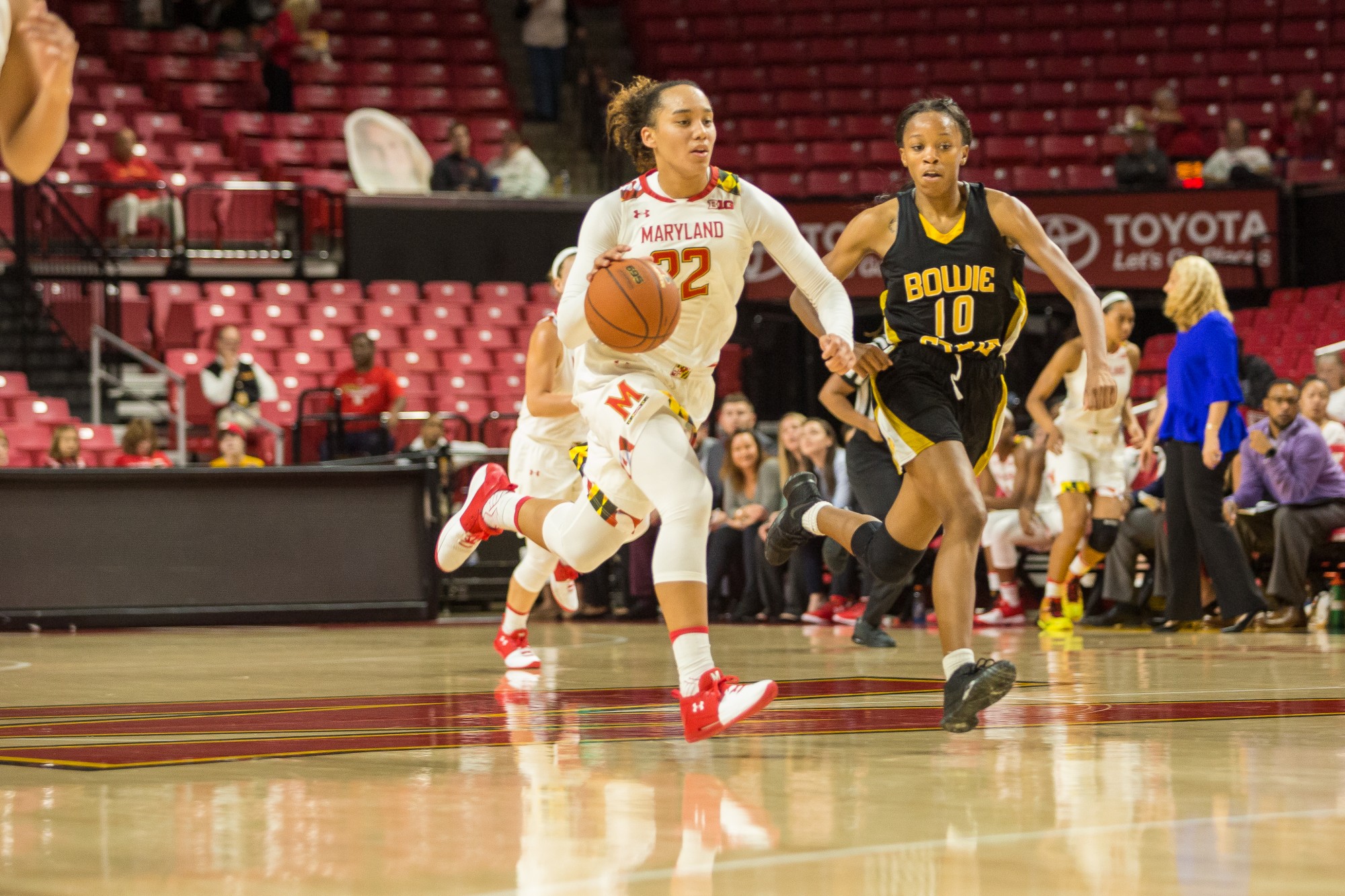 When the Maryland women’s basketball team flamed out of the 2017 NCAA tournament in the Sweet 16, it meant All-American seniors Shatori Walker-Kimbrough and Brionna Jones had played their final games for the program.

The team knew those losses were on the horizon. The shocker came 10 days later, when Maryland announced guard Destiny Slocum — the National Freshman of the Year — would be transferring from the program. The exodus continued throughout the offseason, as three more players transferred out.

Having lost 62 percent of its scoring from the previous season, Maryland suffered a down year. The Terps were dealt a 14-point defeat in the second round of the NCAA tournament and failed to reach 30 wins for the first time since 2013-14.

But the campaign wasn’t without positives, as the Terps established new go-to players and won 26 games, creating a promising base to build upon.

“To go through a season of just pure adversity is something I commend my team for,” guard Blair Watson said before the NCAA tournament. “One thing after another, bringing in new players, going through injury, you couldn’t ask for anything more.”

At the team’s Oct. 24 Media Day, Watson emphasized the departures didn’t take anything away from the team.

When the season began, Watson did her best to prove that was true, becoming a focal point of Maryland’s offense and the team’s second-leading scorer through 17 games. After playing just 10.9 minutes per game last year, the Nutley, New Jersey, native averaged 13.8 points and 4.2 rebounds in 26 minutes per game this season.

Maryland was 15-2 and had seven players averaging double digits entering its home tilt against Michigan State on Jan. 11. However, the day before facing the Spartans, Watson suffered a season-ending ACL tear.

While the Terps had some highlights without Watson, overall the team struggled from that point. Maryland closed the season 11-6, failing to win a Big Ten title for the first time since entering the conference and slipping to a No. 5 seed in the NCAA tournament, its lowest seed since 2005.

After a 14-point loss to the Spartans, the Terps rattled off seven straight wins, none more impressive than the 99-69 thrashing of then-No. 12 Ohio State. However, the team sputtered down the stretch, losing three of its final four regular-season games to drop into second place in the Big Ten.

Convincing wins in the opening two rounds of the conference tournament gave Maryland a chance to claim its fourth straight Big Ten crown, but the Terps fell to the Buckeyes by 10 points in the title game.

“Nobody expected this team to be in this position this year,” Frese said after the loss. “With everything we lost, and then you talk about going down, losing Blair — you know, this has been a rewarding year, when you talk about how this team has bought in.”

Maryland started the NCAA tournament on the road for the first time since 2007, and after beating No. 12-seed Princeton, the Terps fell to No. 4-seed NC State on its home court, ending their season in the second round.

The Terps will lose senior leadership from guards Kristen Confroy and Ieshia Small, but they’re slated to return their top five scorers, as well as their primary point guard Channise Lewis.

Guard Kaila Charles, who started as a freshman alongside Slocum, broke out from the shadows to become Maryland’s star, averaging 17.9 points and 8.1 rebounds as a sophomore.

Guard Eleanna Christinaki will begin her first full season at Maryland after playing half of this year due to transfer eligibility rules. Watson, provided she’s healthy, could return to her key role. Lewis, a freshman who signed after the announcement of Slocum’s transfer and replaced her as the starting point guard, will return as a seasoned sophomore.

Plus, Maryland’s No. 5 recruiting class — headlined by forward Shakira Austin, ESPN’s No. 3 overall player in the country — will provide a further boost to a team that Frese said persevered through the many difficulties thrown its way. Ideally, the Terps will have more stability and fewer question marks entering next season.

“I’m really proud of this team, when you talk about staying the course all year long,” Frese said. “Through injuries, through adversity, they just put their head down and continued to get better.”