“We’re going to be the future”: UMD students take to DC in nationwide March for Our Lives 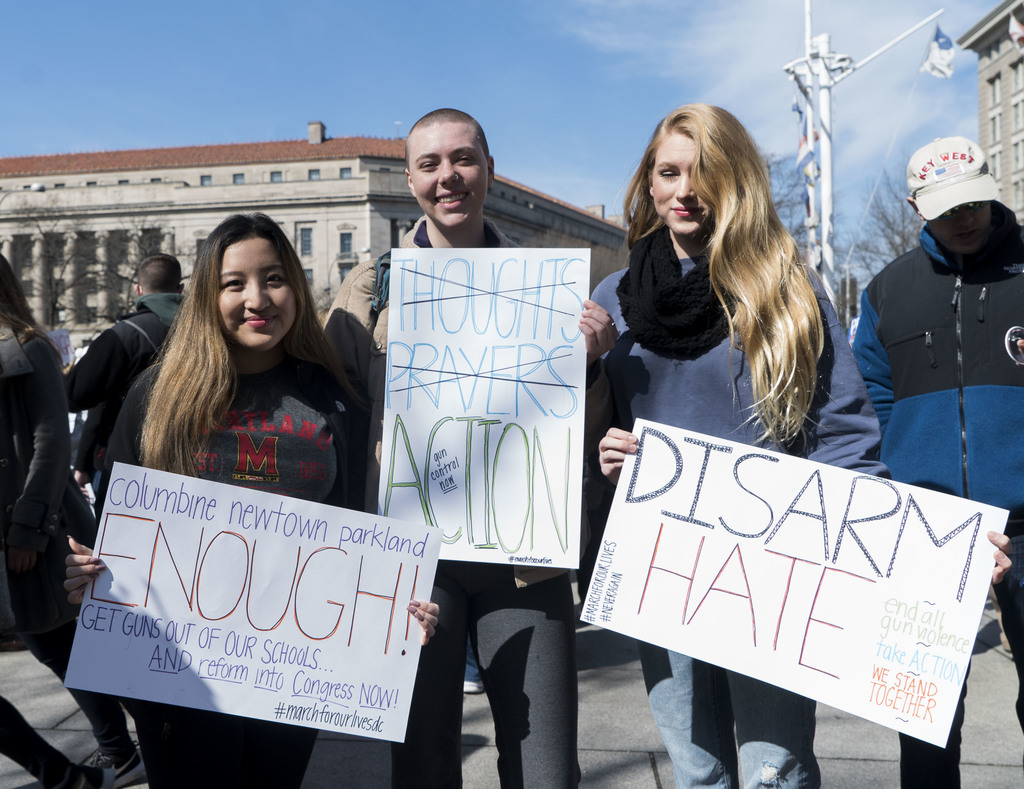 By 9:30 a.m. on Saturday, the College Park Metro Station was packed with hundreds of people, many of them University of Maryland students. They toted small backpacks, water bottles and handmade signs as they steadily poured onto packed trains headed toward the nation’s capital.

These Metro riders — students, College Park residents and others hailing from homes across the country — were all united by a movement that was amplified by students from a South Florida high school, which fell victim to one of the deadliest school shootings in American history.

After 17 people were killed at Marjory Stoneman Douglas High School on Feb. 14, student survivors pushed for stricter gun laws, calling on the nation to join them in the March for Our Lives.

The march in Washington, D.C., which organizers estimated drew a crowd of about 800,000, was one of more than 800 marches across six continents that took place on Saturday. Children and families across the globe took to the streets and demanded an end to gun violence.

“It seems like the debate has really shifted on an axis here,” said Nithin Venkatraman, a junior physiology and neurobiology major who attended the march to support Stoneman Douglas students. “What they’re doing is incredible.”

In the wake of the shooting, Stoneman Douglas students have called for stricter gun laws and have denounced politicians who accept donations from the National Rifle Association, including one of their own elected officials: U.S. Sen. Marco Rubio (R-Fla.).

The students and activists have also been active on social media, using the hashtag #NeverAgain to rally support and raise awareness for their cause.

Standing onstage in front of thousands of marchers, Stoneman Douglas student Emma Gonzalez listed the names of the 17 shooting victims, many of whom were her friends and classmates, before pausing in silence. When she began speaking again, she said it had been 6 minutes and 20 seconds since she had taken the stage — the same amount of time as the shooting at her school just 38 days earlier.

With tears in her eyes, she said, “Fight for your lives before it’s someone else’s job.”

The marchers gridlocked Pennsylvania Avenue for blocks and crowded into open squares and side streets, forming a nearly impenetrable mass beneath the clear blue sky. As they listened to speeches and performances by an array of Stoneman Douglas students, activists and celebrities, impassioned chants of “vote them out” echoed through the teeming roads.

Protesters across the city thrust colorful signs into the air. Some bore phrases such as “21st century weapons, 18th century laws” and “I want to read books, not eulogies.” One simply featured “ENOUGH” etched in harsh black print against a plain white background.

“This movement feels different than previous mass shootings,” Venkatraman said. “It seems like they’re carrying the momentum quite a bit.”

Junior government and politics major Jillian McGuffey was unable to go to past protests, such as the Women’s March. She said she felt excited to be able to attend the march on Saturday and lend her voice to the Parkland students’ efforts.

“They’re using their privilege to help bring more attention to this issue,” she said. “In the past, a lot of the other people who have been victims haven’t been able to have a platform. So I think they’re lucky in that sense — they’ve been able to be such great leaders.”

Stoneman Douglas students have highlighted several policy changes they’re pushing for, including a ban on high-capacity gun magazines and the kind of assault weapons used in many mass shootings and a universal background check system for all gun buyers.

University President Wallace Loh signed onto a letter offering support and encouragement to student protesters, which the Consortium of Universities of the Washington Metropolitan Area released on Friday.

“No student, regardless of race, income, or zip code, should live in fear of gun violence,” the letter read. “We call for our elected leaders to act now.”

Steven Grutman, a junior computer science major who attended the march, said he supports “common-sense” measures such as banning bump stocks, a device that allows semiautomatic weapons to fire more rapidly, and implementing stricter background checks. But he added that assault weapons, such as AR-15s, are not the problem and should not be outlawed.

“If you try and ban [assault weapons], you’re looking at the second Civil War,” Grutman said. “People are not going to want to give up their guns.”

Thus far in 2018, the U.S. has seen 17 school shootings in which someone was injured or killed, according to CNN. On Tuesday, a shooter opened fire on students at Great Mills High School in southern Maryland, St. Mary’s County officials said. Two students were shot — one of whom later died of her wounds — and the Great Mills student who officials said was the gunman was killed after engaging a school resource officer.

David Hogg, a Stoneman Douglas senior who attended the D.C. march, said students have an important role in the ongoing fight for gun legislation.

Scattered throughout the crowd of adults and students were small children, peering over the protesters from atop their parents shoulders, nestled in laps and dozing in comforting arms. At the corner of 8th and D streets, kids drew with chalk on the pavement in the shadows of security guards and heavily armored police vehicles as their parents watched on.

Christine Crudo, an executive assistant at Sandy Hook Promise — a nonprofit that works to educate students on the warning signs of gun violence — said all three of her children went through the Sandy Hook school system. The organization was founded after the 2012 Sandy Hook Elementary School shooting in Newtown, Connecticut, that killed 20 children.

Crudo said the young people who organized and participated in Saturday’s march gave her hope for members of future generations, like the children drawing with the chalk.

“They’re gonna make the difference,” she said. “Our first graders at Sandy Hook couldn’t speak as articulately as these teenagers can.”

As one of these young adults, Venkatraman said his generation has the power to affect gun control policy by voting for stricter gun control measures.

“We’re going to see a large cultural shift. Something that’s pretty necessary about the way we think about guns,” Venkatraman said. “We’re going to be the future.”