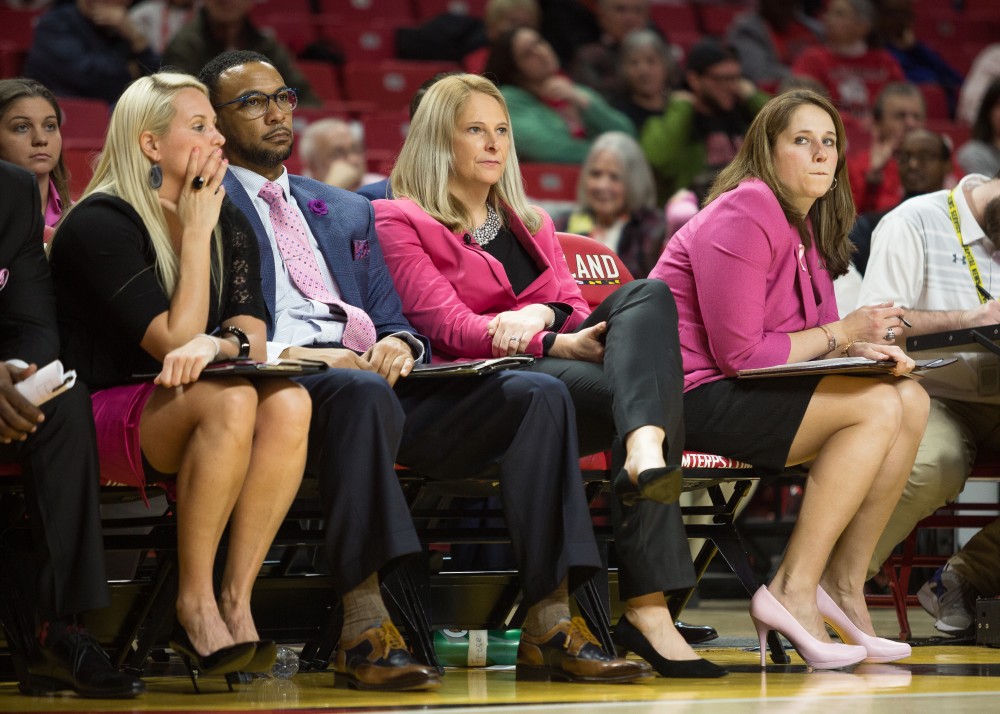 RALEIGH, N.C. — Kiara Leslie looked Maryland women’s basketball forward Eleanna Christinaki right in the eyes, as if she was daring her to step up. Then, the former Terp launched a 3-pointer right in front of Christinaki and drained it.

Leslie, who transferred to North Carolina State before this season, made that triple during a 19-4 third-quarter Wolfpack run that put the NCAA tournament second-round game out of reach for Maryland.

The Terps couldn’t stop their former teammate, as Leslie exploded for 21 points and 11 rebounds, helping end her old team’s season with a 74-60 defeat.

“I thought [Leslie] was tremendous and brought great veteran leadership,” coach Brenda Frese said. “You could see her will to win today.”

In Maryland’s tournament opener against Princeton on Friday, the No. 5-seed Terps (26-8) struggled in the first quarter. On Sunday, they started slow again.

Unable to penetrate a physical No. 4-seed North Carolina State (26-8) defense, the Terps settled for contested jump shots and paid the price. They shot just 3-for-15 in the opening quarter.

Maryland gained some momentum immediately in the second quarter when guard Ieshia Small picked off the opening inbound pass and scored an easy fast-break layup. But on the ensuing possession, guard and leading scorer Kaila Charles picked up her second foul and retired to the bench for the final 9:44 of the half.

North Carolina State responded with four straight points to establish an 11-point cushion and force coach Brenda Frese to call timeout. That seemed to rejuvenate the Terps, though, and forward Brianna Fraser began to take over.

Fraser outmuscled North Carolina State’s post players and scored eight of Maryland’s final 13 points in the half, cutting the deficit to just six at the break. She finished with a team-high 17 points on 6-for-11 shooting.

“Fraser was great,” NC State coach Wes Moore said. “We were trying to keep the ball out of her hands … we didn’t have an answer for her today. Every time she got it, it was, ‘She’s going to the hole,’ and we were in trouble.”

Maryland remained competitive to begin the third quarter, and a layup from Fraser with five minutes left cutting North Carolina State’s lead to one point. That was as close as Maryland got, though, as the Wolfpack responded with their 19-4 run.

The Terps never made up the ground they lost, and North Carolina State led by at least 10 for the entire fourth quarter. Charles scored just four points as Leslie put the clamps on Maryland’s most potent scorer.

For the second season in a row, the Terps didn’t make a 3-pointer in their NCAA tournament loss.

“Konig did an excellent job,” Confroy said. “I felt like I couldn’t even get a look at a 3-pointer, which obviously is what I’m looking to go to. Credit to them, they did a great job, especially on me defensively.”

It was the second time in three years the Terps bowed out of the NCAA tournament in the second round.

Small and Confroy, the team’s two seniors, exited the court separately in the final minute. As the latter came off, she embraced Frese for several seconds.

“I’m really proud of this team,” Frese said. “Through injuries, through adversity, they just put their head down and continued to get better. Twenty-six wins and [they] did everything we asked for as a coaching staff.”