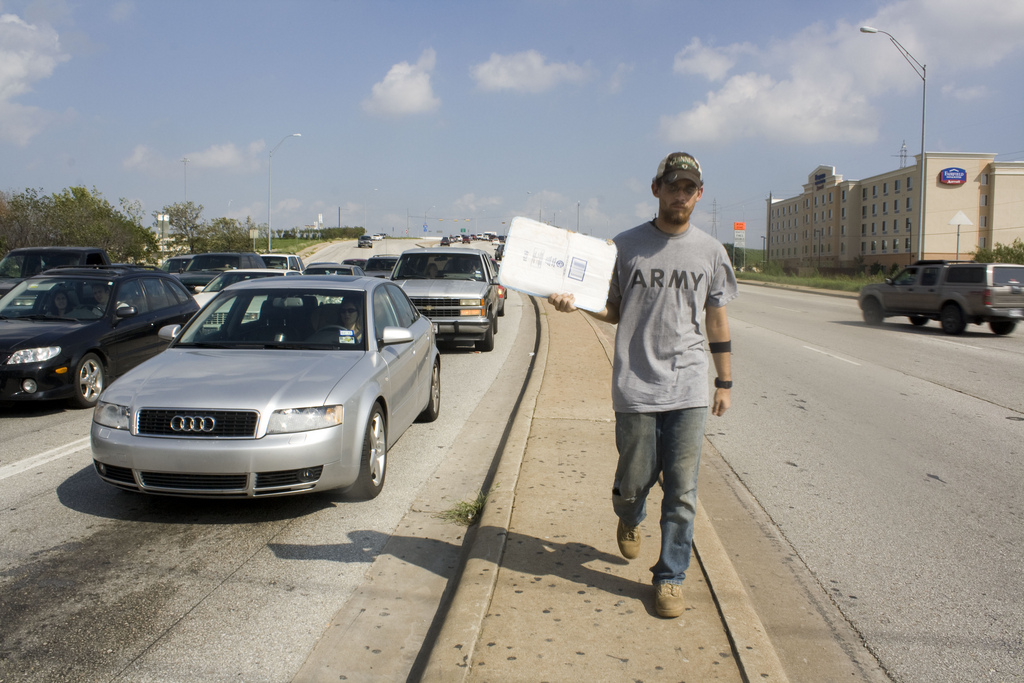 Montgomery County lawmakers have a new plan to punish their most desperate constituents. Council members Craig Rice and Roger Berliner recently introduced legislation to prohibit people from soliciting vehicles from medians and roads. The measure criminalizes roadside panhandling, a last-resort income source for many poor and homeless individuals. Arguing the measure will make panhandlers safer, legislators from one of America’s richest counties want to cut a lifeline for people whose backs are already against the wall.

The proposal isn’t unique to Montgomery County; jurisdictions across the country have long waged a war on people who are poor and homeless. As of 2016, 27 percent of American cities have total bans on panhandling, and 61 percent have partial bans. The Montgomery County proposal is in keeping with an American tradition: criminalizing the symptoms of poverty instead of treating its causes.

[Read more: Violence against homeless people is an American epidemic]

George Leventhal, a council member and candidate for county executive, offered a remarkable characterization of panhandling, explaining, “I have sympathy for anyone who is in poverty. But panhandling in the street is undesirable. It’s not safe. It conveys somehow the county is not providing services for people in need, and that’s not so.”

This statement is breathtaking in its callousness. Leventhal appears to argue Montgomery County already provides such generous social services that nobody needs to panhandle from roadways. And when people do panhandle, it’s “undesirable” because it suggests the county isn’t upholding its obligation to the poor.

To illustrate the county’s failure to serve low-income individuals, let’s talk about housing policy. Mountains of evidence indicate that providing affordable housing is the single best way to reduce homeless. And high housing costs, especially in places like Montgomery County, frequently prevent people from climbing out of poverty.

But the county’s main affordable housing effort, the Moderately Priced Dwelling Unit program, is threadbare and temporary. It features long waitlists that are overseen by apartment owners instead of the county. Many county residents look to federal programs for help: 35,000 residents are on the waitlist for federal Section 8 housing vouchers.

A recent report found the county was short 20,000 affordable rental units. At the same time, Montgomery landlords are able to evict tenants without just cause, forcing people who are struggling into the streets, where they might have to panhandle for sustenance.

Montgomery County is really, really rich. Its landscape is dotted with gauche McMansions and gleaming luxury apartments. And its median household income is $98,314 — nearly twice the national figure. The jurisdiction’s economic pie is enormous.

Yet Montgomery County lawmakers want to make it harder for those with a tiny piece of the pie to keep even that. Our intuition tells us that’s unjust, and our intuition is correct. Instead of criminalizing panhandling, officials should strive to rework the county’s economy into one that renders it unnecessary — and makes extreme poverty obsolete.

CORRECTION: Due to an editing error, a previous headline claimed Montgomery County Council had already passed a panhandling ban. The restriction hasn’t passed. A previous version of the column also stated that Leventhal defended the restriction. He doesn’t support the measure. The column has been updated.