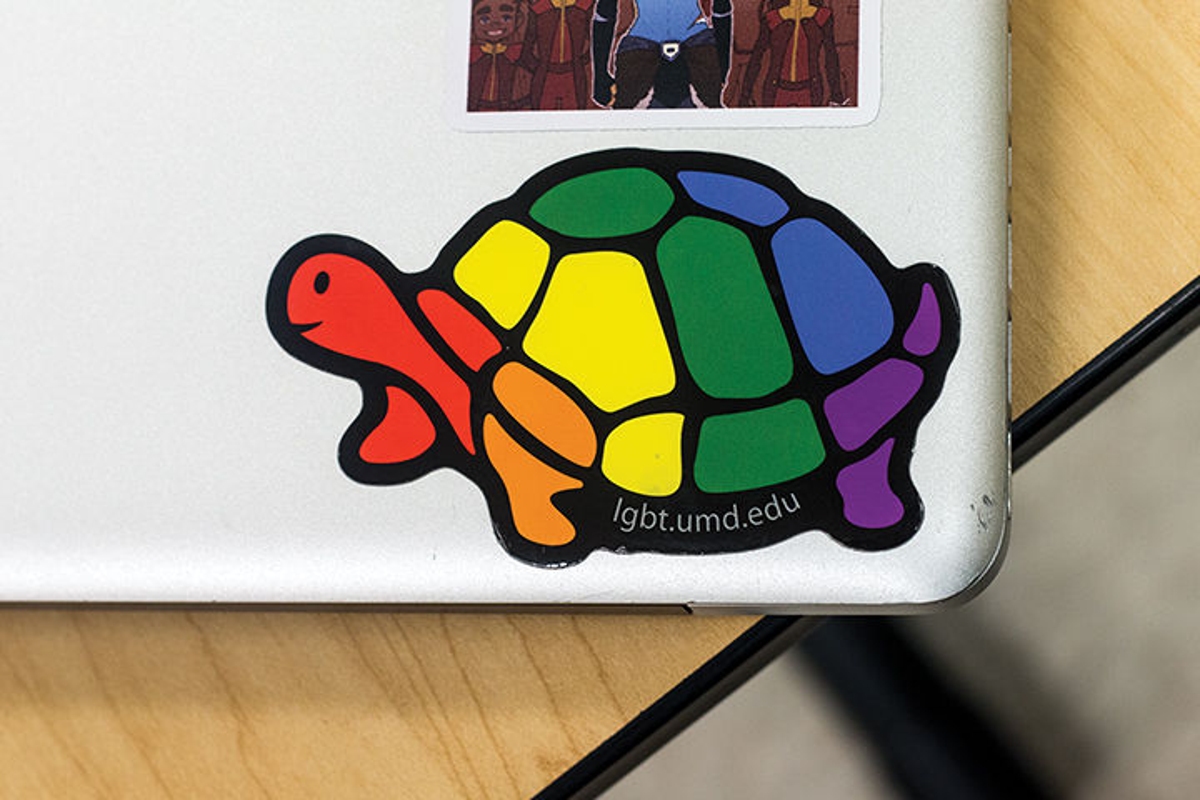 As a transgender man who attended an all-girls high school, Max Balagtas-Badoy said he’s been “hyperaware” of the power of pronouns since he was 14.

“Pronouns are like names,” he said. “They’re just words that we want people to use when they refer to us.”

[Read more: UMD is ranked as the most LGBTQ-friendly Big Ten college]

Balagtas-Badoy, now a senior philosophy and psychology major at the University of Maryland, helped design and implement Pronouns Pronouncement Day on the campus in November 2016. On Wednesday, students and faculty were encouraged to participate in the event by displaying their pronouns on stickers or buttons.

Organizers also developed lists of “pro tips” for making transgender people feel welcome, such as including pronouns on emails and business cards, using gender-neutral language such as “friends” or “y’all” when referring to groups of people and what to do after accidentally misgendering someone.

These tips were shared online and displayed on screens across the campus, including in Stamp Student Union, said Jazmin Pichardo, program manager for this university’s Global Communities program.

Pichardo, who helped publicize the event, said she hoped it would make people who are unfamiliar with the issue feel more comfortable entering the conversation.

“As a cis person, there is a lot of anxiety about talking about a community that you’re not a part of because there’s a fear that you’ll say something wrong or offend someone,” she said. “For this campaign, we wanted something that was accessible to everyone.”

Balagtas-Badoy said he has felt a shift toward transgender inclusion at this university since last year’s Pronouns Pronouncement Day, due largely to the development and growth of the #TransTerps campaign that was launched in September. But he added there’s still a long way to go.

“I get misgendered a lot, all the time,” he said. “It doesn’t bother me as much now, because I’m able to use this as a teachable moment, but I don’t think that’s labor that any trans person should have to do.”

In November, the #TransTerps campaign conducted a survey of 45 campus offices, departments and student groups who signed onto the initiative in an attempt to understand how trans issues are treated at this university, said Sika Wheeler, coordinator at the LGBT Equity Center.

The survey found that in about 50 percent of responding academic departments, there are no instructors who include a statement in their syllabus about names and pronouns, Wheeler said, and 20 percent of all respondents consistently invite members of their office or group to share their pronouns.

Wheeler said she’d like to see an improvement in these and other areas when the campaign conducts the survey again this spring.

“In my opinion, [we’re] in the middle when it comes to trans inclusion. It’s not terrible in most spaces, but it also really is not where it could be,” she said. “We know that there are good people on this campus with good intentions, but are you actually implementing actions and practices that really show that?”

Sophia Relph, a senior mechanical engineering major, serves as an administrator of a Facebook group for trans students at this university called Trans U, where students can talk about their experiences and problems and get support. She said it’s often the only safe space that transgender and gender non-conforming people have access to.

Relph said that the bulk of transphobia she experiences on the campus comes from a place of ignorance, which “is not in and of itself an evil or a personal fault, but it is indicative of the fact that there’s no baseline education” on LGBT issues.

She added that she thinks this university should include lessons on pronouns and gender in entry-level courses, such as UNIV100, a class that many freshmen take each year, and make it easier for students to update their names and gender in university databases.

Relph said she had to visit multiple campus buildings before her correct name was listed in systems such as ELMS and Testudo.

Moving forward, Wheeler said the #TransTerps campaign will continue to work toward creating a more welcoming environment for transgender and gender non-conforming students at this university, and that pronouns will play an important role in that process.

“It’s one of the most surface-level things that could really make an impact,” she said. “The first step is honoring who [people] are just by what you call them.”