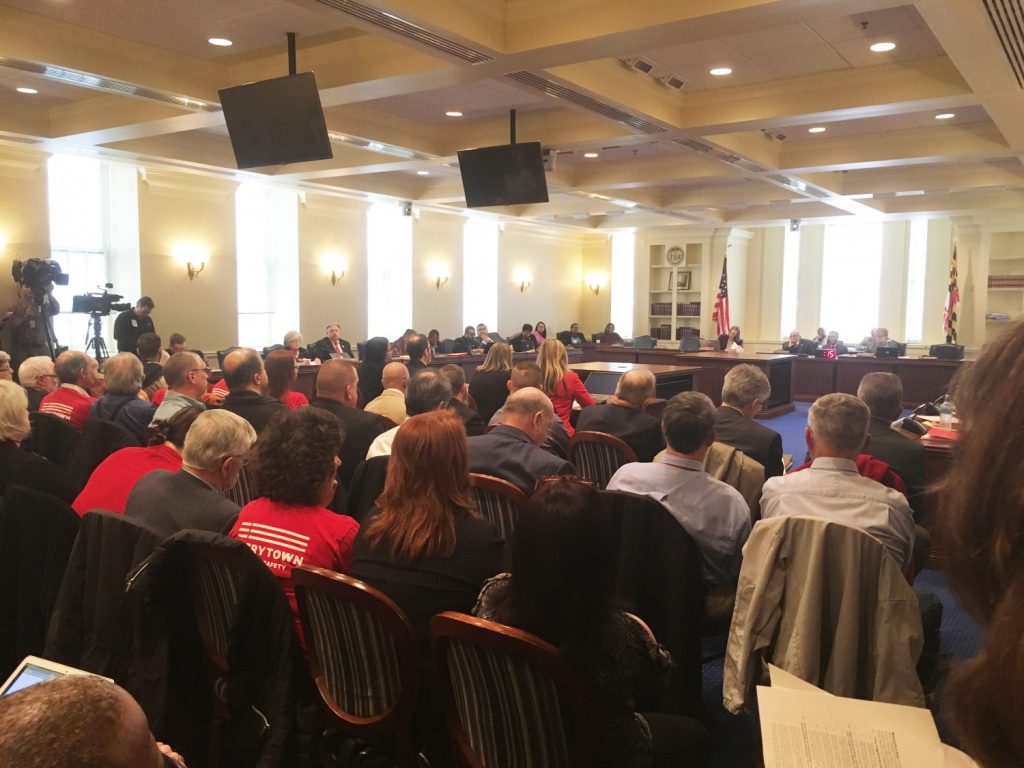 After 17 people were killed in a mass shooting at Marjory Stoneman Douglas High School in Parkland, Florida last month, Maryland legislators have introduced several bills, ranging from bans on bump stocks to taking away guns from domestic abusers, with the hope of reducing gun violence.

“In this general area, I’m in favor of anything that will keep students safe,” said university President Wallace Loh, noting he doesn’t typically comment on pending legislation.

Here are some prominent bills legislators have introduced to address gun violence and school safety in the Maryland General Assembly this legislative session.

Last month, Sen. Victor Ramirez (D-Prince George’s) introduced a bill banning bump stocks, which allow semiautomatic weapons to fire at a faster rate. 26 senators are co-sponsoring the bill, and Maryland House Speaker Michael Busch supports it. The ban also covers similar rapid-fire trigger activators called trigger cranks, and if the bill passes, violators could face a fine of up to $5,000 and as many as three years in prison.

Bump stocks were used in the Las Vegas shooting last year, when more than 1,100 rounds of ammunition were fired into a crowded music festival. 58 concertgoers were killed and another 422 were injured by gunfire.

Hogan said he would consider supporting the legislation, which the National Rifle Association has publicly opposed. Hogan holds an “A-” rating from the NRA.

“I really believe that there’s no practical use for a bump stock in today’s society in Maryland,” Busch said during testimony last month, WBALTV reported.

“The National Rifle Association is opposed to the banning of any firearms or firearm-related accessory. Full stop,” Alford told legislators.

A bill that would ban bump stocks — co-sponsored by U.S. Rep. Anthony Brown (D-Maryland) — has been introduced in the U.S. House of Representatives.

This legislation would force a person to surrender their weapons if they were found to be a danger to themselves or others based on evidence submitted to a court, a measure Hogan supports. The order would last one year and could be extended an additional 12 months if an individual is still deemed a danger.

The “red flag” name represents warning signs a person might exhibit such as suicidal behavior or threats of violence, according to a report by Everytown For Gun Safety, a gun control nonprofit organization.

“In these very tragic situations, we hear all too often that the gun owner sent out some signals, and … there was an impending sense that something was going to happen,” Valentino-Smith told The Sun.

Del. Vanessa Atterbeary (D-Howard) introduced a bill that would require those found guilty of domestic abuse or a similar qualifying crime to surrender their guns within five days of a guilty plea. After five days, law enforcement could take guns from abusers if it was determined that the person still had guns in their possession.

“This bill would save people’s lives,” said Atterbeary, who hoped to see the bill pass in the coming weeks. The bill was heard at a House of Delegates Judiciary Committee meeting Tuesday.

Atterbeary said the bill received attention after Prince George’s County police officer Cpl. Mujahid Ramzziddin was shot and killed during a domestic dispute between Glenn Tyndell and Tyndell’s estranged wife. Tyndell had been ordered to surrender his weapons “at least three times in the past,” The Sun reported.

Maryland law prevents the sale of firearms to a person convicted of domestic violence but does not proactively force abusers to surrender their weapons.

“The judge properly ordered him to [surrender his guns], but there was no mechanism to follow up to make sure that he actually did that,” Atterbeary said.

Del. Rick Impallaria (R-Harford) introduced a bill that would allow school employees to carry guns on campus, an idea floated by Trump in the days after the Parkland shooting.

“The bill is very simple,” Impallaria told The Sun in January. “All we’re doing is giving authority to those school systems to put this into practice.”

Maryland law prohibits firearms from being carried on school grounds.

The bill would authorize county boards of education to allow employees to carry a weapon while at school. Licenses for these guns would be provided by the Maryland secretary of state police, the bill said. Hogan said he does not support the bill.