Ode to an oak: 50 gather for candlelight vigil 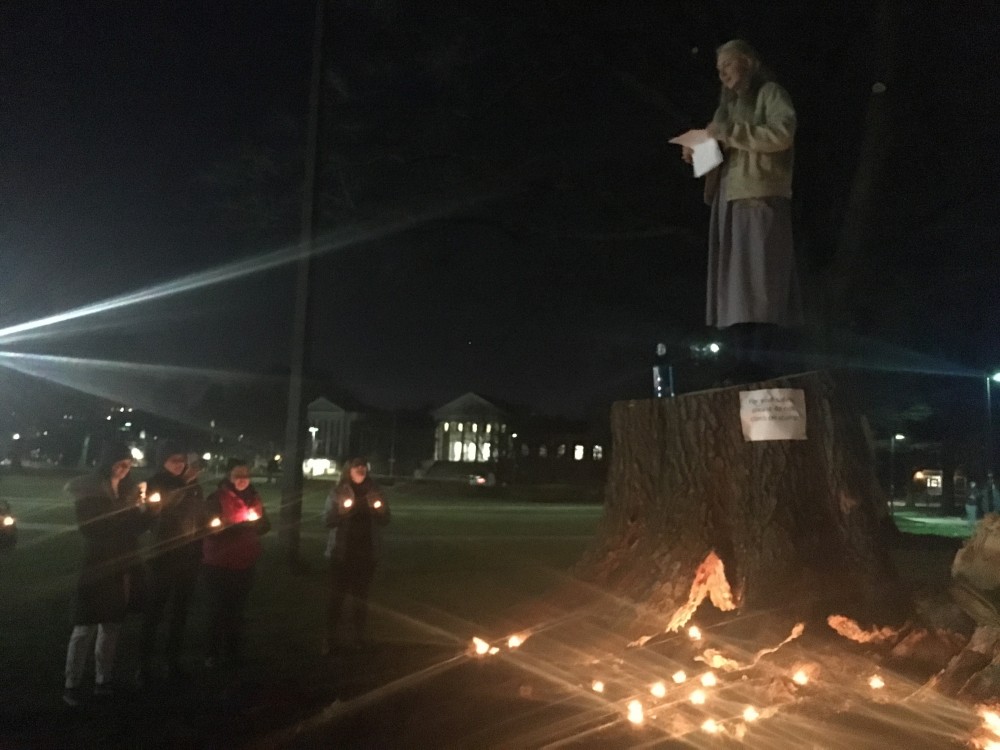 I would give anything to have captured the scene on video: 50 people holding tea lights gathered around a large stump, the notes of a flute playing Celine Dion’s “My Heart Will Go On (Love Theme From Titanic)” filling the air.

But my phone died. Because it was fucking cold.

A Facebook event titled “Candle Light Vigil to Honor the Fallen Tree” had over a thousand people interested. Remarkably, several dozen actually came out to a honor the remains of a willow oak blown over during the wind storm that closed the university Friday.

When I arrived, before I could mention my elevated status as a reporter, Dyani Frye thrust a candle into my hand. Her friend swooped in to light it. I placed it by the stump. I could no longer be neutral, I had broken all journalism ethics.

But make no mistake, the event was not a joke. At least not for junior plant science major Frye.

“When you actually stop, look and listen to [trees] a whole new world opens up,” the soil minor said. “Wow, that sounded really hippy dippy.”

To the casual observer, 50 people paying homage to a tree topped with what appeared to be Starbucks and blue alcohol was probably also really hippy dippy.

As Frye’s “soil friend Cathy” Wang played the flute, the reflective moment was only ruined by the bright flash of a DSLR as all of campus media descended on the event.

“Hey,” I said rather aggressively to a freshman journalist taking notes on a 5-subject notebook, “help a fellow journalism major out and give me a pen.”

I circled the periphery looking for quotes. I swept up behind two girls and was greeted with a minor eye roll.

“I never would have thought to go to a vigil for a tree before,” said senior Sarah Gitterman, an animal science major. “I don’t know what I expected.”

Me neither, Sarah. Yet there we were.

Frye took the stump to read prepared remarks. Her ankle-length purple dress and silver hair moved in the leftovers of the same breeze which had killed the tree three days prior.

“This tree by merely existing changed the world,” she said before warning that hanging hammocks from campus trees was bad for them. “I don’t have beer but I did bring liquid fertilizer.”

Oh. I thought it was WAVE.

My new friend Sarah, who had given me a generic quote a few minutes prior, found her voice upon the stump.

“I think we should try to apply the consideration we give to this tree to the other things in our life,” she said with newfound elegance.

She was followed by a student who said he had given a fake name to reporters and warned that everything “was in a constant state of degradation.” He brought the blue substance to his lips.

Back when I thought it was vodka, I wouldn’t have found it odd.

Just before the tilt of no return, he brought the bottle down toward the earth.

The crowd nodded as he poured one out for the fallen. He got down and laughed as he gave a reporter a quote attributed to Eazy-E.

Frye hugged her friends and thanked them for coming. No matter what faulty science or sappy eulogy was given, she had succeeded in honoring a tree.

“A willow oak can live for over 200 years,” she said. “I think that’s really romantic in a sad way.”

She couldn’t have described a candlelight vigil for a tree any better.

Due to a reporting error, I wrote Easy E instead of Eazy-E. Fire me.