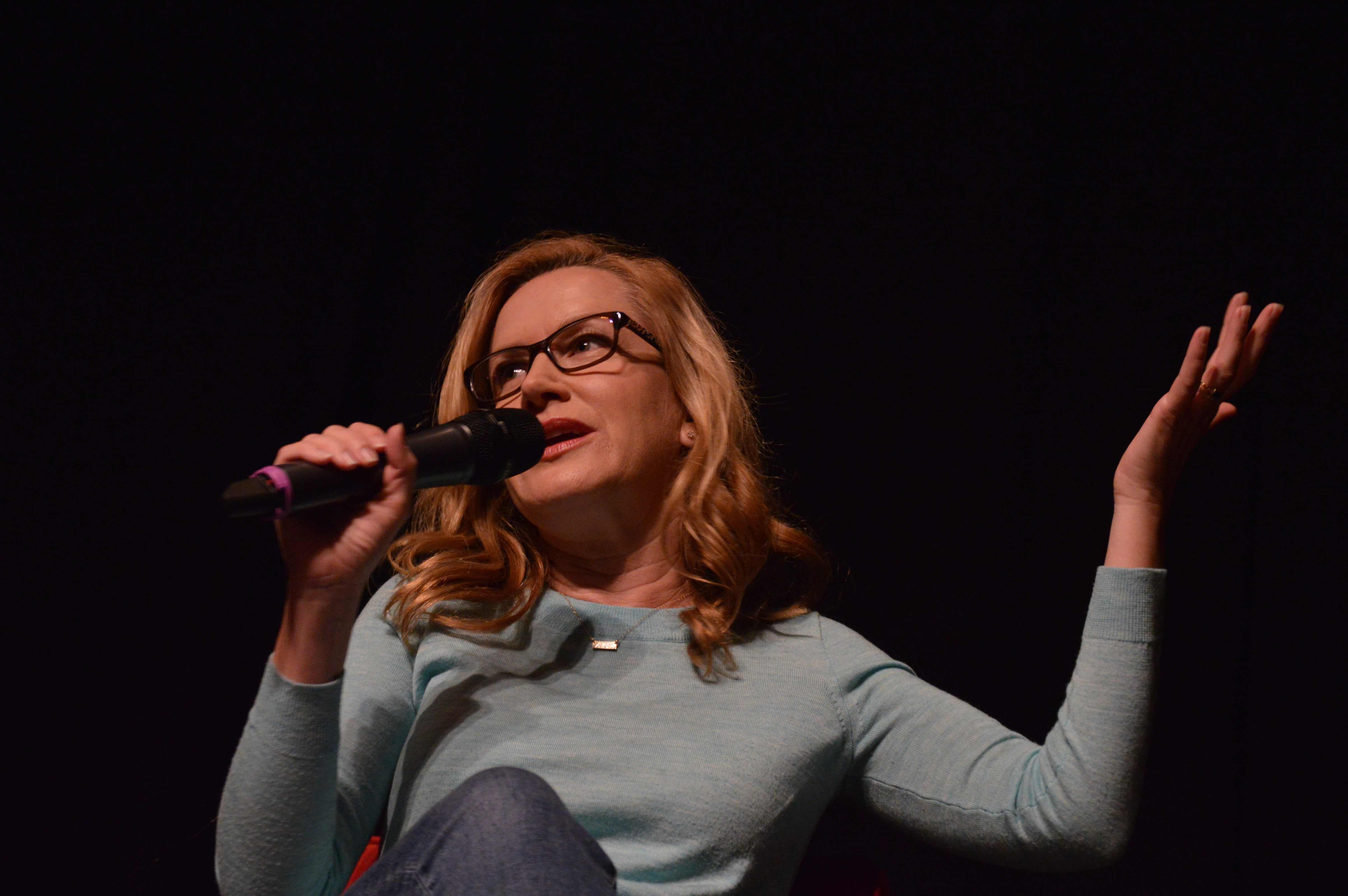 When The Office star showed up in College Park the night before her Student Entertainment Event’s lecture, she was hungry. On her way to the parlor known for giant late-night slices, a rowdy group from the bar pointed her to Lotsa. Although her food search ended in trail mix at the hotel, at least one student snapped a photo with the 5″1′ actress known for playing the uptight, cat-loving, party-planner Angela Martin.

On March 1, Kinsey relived one of the happiest parts of her career as she spoke to a sold-out Grand Ballroom. And no, she’s not tired of talking about it.

“It makes me really proud that something we did all those years ago is still resonating with people,” she said before the show.

Kinsey grew up in Jakarta, Indonesia, until she was 14. She still speaks some of the language and even spoke some to the room. She says her family dynamic pushed her toward acting (although her grandmother refuses to watch The Office on account of its vulgarity).

“I come from a big Southern family. If you could hold my family’s attention, that was a big deal — storytelling was important,” she said.

At Baylor, she studied theater before switching to creative writing. Unlike Angela Martin, the real Angela is less militant (although she loves an organized drawer) and wanted more flexibility in her studies, she said.

“I was a real nerd. When I turned 21 I was writing a thesis paper, didn’t even go out. I loved the library. I loved that I just got to study all day,” she said. “I think I could have been a perpetual student.”

It took Kinsey eight years to catch her break in acting. During that time, she worked for 1-800-Dentist, where coworkers gave her inspiration for future roles she would write. Kinsey has sold five shows.

Ironically, The Office casting director first called her for the role of Pam. They liked her, but she was too feisty for the soft-spoken woman behind the front desk. Two months later, they tried her out as the bitch in the corner. It was a match.

“I actually wore the clothes that I wore to the audition in the pilot,” Kinsey said.

Working in one big room, called the office, the cast quickly became close. No matter how minor the scene, everyone had to sit in the background and pretend to work in the paper company.

“We got real computers after the second season,” she said. “We would pay bills and IM each other.”

Looking back, it’s easy to forget that the show wasn’t always guaranteed its status as a hit. Kinsey fondly remembers Christmas episodes, but especially “Yankee Swap.”

“That’s when our show really took off,” she said. “Some of us were driving pretty dumpy cars ­— that’s when we thought maybe we can get a decent car. That’s when it felt like the world found us.”

Kinsey became close with Jenna Fischer both on set and off. During the lecture, she recalled a moment when the pair made each other laugh so hard the director had to call a break and they were worried they might be in trouble.

“It was very hard to be mean to her all those years,” she said.

Over the years, Kinsey saw her character evolve. While she always played the bitch, Angela Martin saw a wider range of emotions — happy, sad, suspicious.

Throughout the lecture, Kinsey revealed behind-the-scenes magic. In “Dinner Party,” her large bouquet of flowers covered her pregnancy. In “Fire Safety,” a stunt double was supposed to throw the cat into the ceiling and a fake, gelatinous cat was supposed to fall from the other side. The plan went awry and both cats ended up dropping to the floor.

After her Netflix show Haters Back Off was canceled, Kinsey began auditioning for her next move. She also recently sold a show to TBS about a girl who moves to Texas after growing up in Indonesia.

“It’s a coming-of-age story, cringy comedy, which I love,” she said.

At the lecture, a student asked about the Office reboot rumors that began circulating a few months ago. To the dismay of the crowd, Kinsey said she didn’t know anything.

“I am a party-planning committee person in real life so I have stayed in touch with everyone and bugged everyone and no one has been called to my knowledge. We don’t know,” she said.

But she’s not opposed to the idea.

“I for one would be like, ‘Sign me up!'” she said. “Where are Dwight and Angela? What’s up with the beet farm? What’s Philip like? Have we had more kids? Where are the cats? I’m a true fan of the show.”