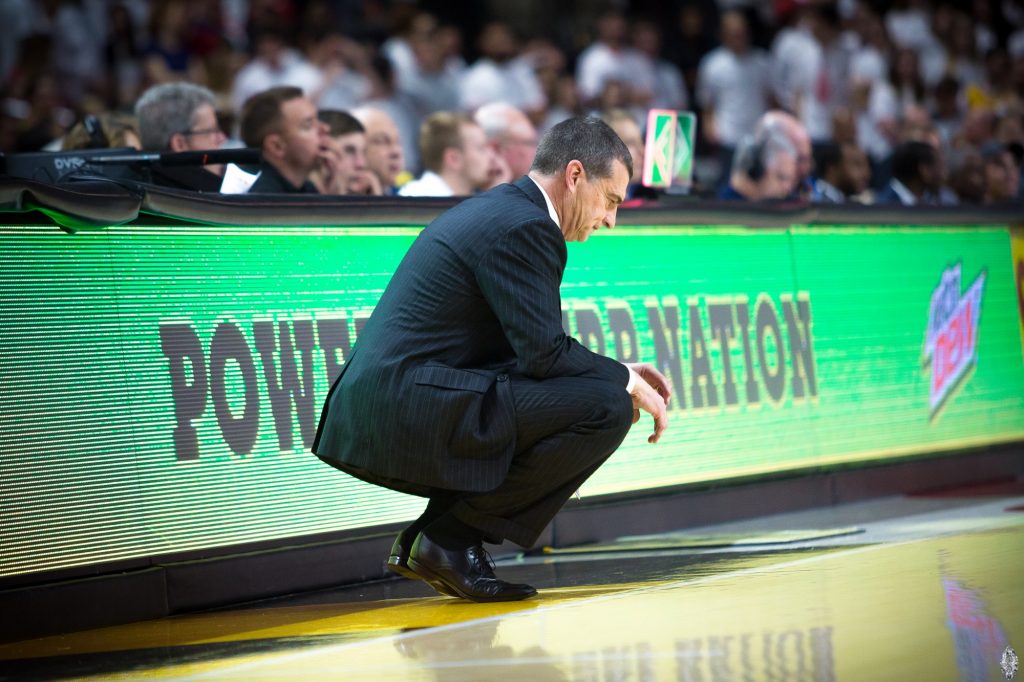 After the Maryland men’s basketball team failed to switch on a screen midway through the first half Saturday afternoon, Michigan guard Muhammad-Ali Abdur-Rahkman knocked down his fourth 3-pointer and shrugged his shoulders, as if to say scoring against the Terps was no sweat.

About three minutes later, forward Joshua Tomaic fell to the court while contesting another Abdur-Rahkman trey. After making the shot, the senior stared down Tomaic and screamed as he trekked back on defense.

Maryland’s 85-61 loss to No. 17 Michigan was a sour ending to the Terps’ regular season, but the Wolverines continued to rub in their success as they built a 30-point halftime lead.

After making a corner 3-pointer with 64 seconds left in the opening period, guard Jordan Poole turned toward Maryland’s student section and banged three fingers on both sides of his head. Abdur-Rahkman gave chest bumps to teammates after draining a 3-pointer at the end of the half and then darted past Maryland’s bench on the way to the locker room, knocking into Terps head associate athletic trainer Matt Charvat as Terps fans booed their team’s performance.

Michigan did whatever it wanted against the Terps, handing coach Mark Turgeon his worst home loss in his seven-year tenure.

“It was just one of those days,” Turgeon said. “Whatever button I tried to push and no matter what I tried to say, it wasn’t going to get corrected.”

Maryland (19-12, 8-10 Big Ten) finished below .500 in the Big Ten for the first time since joining the conference in 2014. The Terps, who play Wisconsin in their first Big Ten tournament game Thursday, will likely need to win the conference tournament to qualify for their fourth consecutive NCAA tournament.

When Maryland last played the Wolverines on Jan. 15, the Terps held a lead in the waning seconds, but they didn’t guard Michigan’s inbounds pass on its final possession, and Abdur-Rahkman received a pass and drew a foul before knocking down the game-winning free throws.

Michigan sunk 11 3-pointers in that game, but the Terps stuck around behind stingy first-half defense and guard Anthony Cowan’s 24 points.

Maryland, which went 15-3 at home this year, rotated more than it needed to on Michigan’s screens, struggled to defend shooters when the Wolverines sprinted in transition and over helped on some drives, guard Kevin Huerter said. The Terps entered Saturday allowing the second-highest 3-point percentage in the Big Ten during conference play (39.3 percent).

“We had 11 threes at halftime,” Michigan coach John Beilein said. “That is not going to happen again.”

Abdur-Rahkman finished with a career-high 28 points on 6-for-13 3-point shooting. Maryland outscored the Wolverines in the paint, but outside of Cowan (17 points), Huerter (12) and forward Bruno Fernando (12), no Maryland player scored more than five points.

The Xfinity Center crowd tried to create energy for a Terps comeback in the second half, but Michigan responded each time Maryland went on a run. As fans filed out of the stadium and the Terps celebrated their seniors by taking them out of the game for their final home contest, Maryland players could only clap with blank expressions on their faces.

On Friday, Yahoo Sports reported center Diamond Stone received an improper loan from an agency while at Maryland, but Turgeon said that incident wasn’t a distraction.

“[Turgeon] told us it had nothing to do with us,” Cowan said. “When he said that, I think everybody kind of shut it out and tried to focus on ourselves.”

Maryland’s defeat all but means it will need to win four consecutive Big Ten tournament games, the only hope the Terps still have to make the NCAA tournament after their worst season since 2013-14.

“What I told [my players] was that we’re going to take tomorrow off and come Monday, if I see any quit in anybody, I’ll run the crap out of you,” Turgeon said. “We have to stay confident because it’s never as good as you think, and it’s never as bad as you think.”