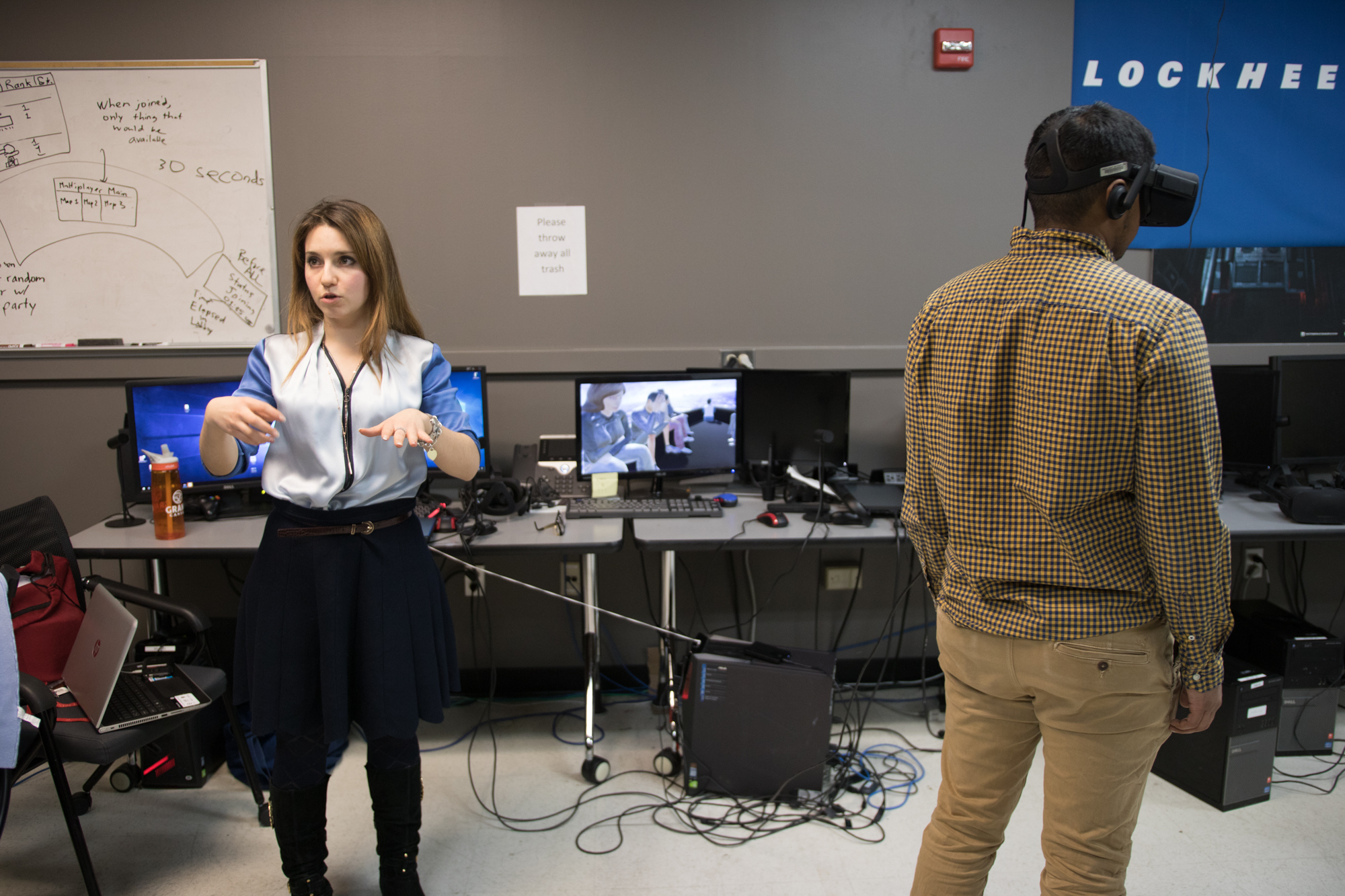 Lina Zdruli and Savya Konkalmatt at the Virtual Reality Club in AV Williams on February 8th 2018. He was playing the game as she was explaining the story. (Richard Moglen/The Diamondback)

VRefugees uses virtual reality to tell the story of a Syrian refugee traveling to Europe. Zdruli, a consultant for The World Bank — a financial service that helps developing countries around the world — wanted to create this immersive experience to help people better understand the perils of this journey.

“I wanted to put someone in the shoes of a refugee and for them to understand that the journey is extremely dangerous,” Zdruli said. “When the user puts the headset on they become the refugee, which eliminates that sense of detachment people usually have to the situation.”

The simulation, which took Transcend Studios about a year to create, turns a month-and-a-half-long trip into a seven-minute journey. It starts from Syria, then goes through countries such as Lebanon, Turkey and Greece, ultimately ending in Germany.

Zdruli said she chose Germany as the destination because the country has accepted the most refugees of any European country. In 2016, Germany accepted more than 260,000 refugees, followed by Greece, which took more than 19,000 refugees, according to Eurostat. Zdruli interviewed eight refugees to create the simulation, and she said each interview took from three to eight hours.

The most dangerous part of the journey is when the refugees are traveling by boat from Turkey to Greece, Zdruli said. The boats are made to fit between 15 to 20 people, but smugglers actually load more than 40, she said. Some of the time, the smuggler puts less gas than needed into the boat, which can lead to refugees drowning in the middle of the sea if the boat runs out of fuel, Zdruli said.

One of the refugees interviewed said this scenario happened to him, but he and the rest of the people on his boat were able to survive because he brought an extra tank of gas, since he knew the smuggler could have tricked them, Zdruli said. In the VR scene of the boat ride, there is a boat of people drowning in the distance, to show how common the situation is.

Luke Johnston, a co-founder of Transcend Studios, came up with the idea for the startup during a screenplay writing class. Besides VRefugees, the venture is also working on TranscendVR — an immersive fighting game where players use weapons and fight a computerized avatar — and an interactive documentary on the solar eclipse that occurred this past summer.

Johnston, a senior English and mechanical engineering major, hopes VRefugees will help get the word out about the startup to other university students.

“One of the reasons why it’s important for us to — no pun intended — transcend different majors into our startup is because they have their own ways of contributing to our projects,” Johnston said. “We incorporate music, sound effects, design, programming, all to create a very immersing experience. The more majors we have, the better the experience will be in the end.”

Indah Namira, another co-founder of Transcend Studios, immediately wanted to work on the project when she heard what it was about. She graduated from this university last year in studio art and considers Transcend Studios her full-time job.

“I am Muslim, so when I first heard about this project, I felt like I just had to do it,” said Namira. “I can only help so much — I’ve made some sculptures in my classes to highlight the refugee problem — but I do hope with this project that we will be able to open up the border so that people will be more open-minded to refugees.”

The simulation is in its finals stages, and Zdruli hopes to have it officially launch in March. She also wants to host a big event to showcase the video on June 20, which is World Refugee Day.

“This video has the potential to create policy change and educate anyone from elementary school to university settings to the general public,” Zdruli said.