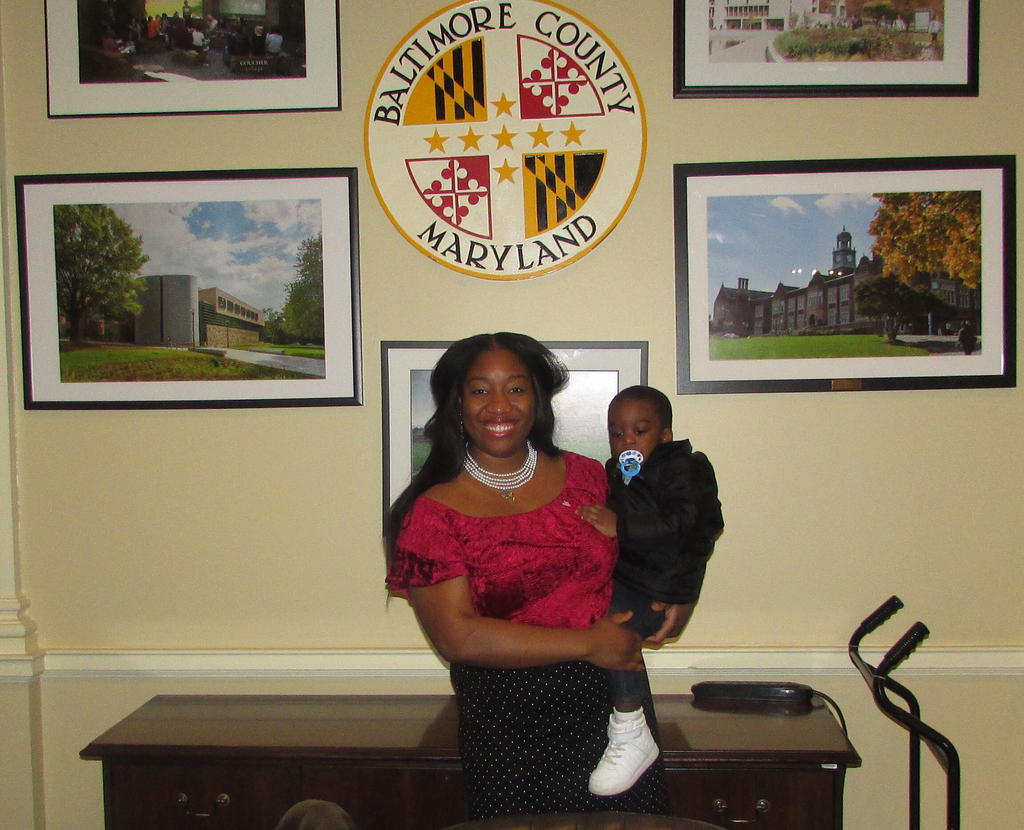 On a bench along a nearly-vacant hallway in the Annapolis State House Office Building, Winnie Obike hastened to pull up a Barney YouTube video on her iPhone to calm her 2-year-old son’s cries. The University of Maryland doctoral candidate had driven about 35 minutes from Hyattsville that Tuesday morning to testify in favor of a bill that would give graduate student workers, such as herself, collective bargaining rights.

It had been more than an hour since they arrived, and her son, Michael, was getting fussy. He needed a nap.

Calmed by Barney and a pacifier, Michael’s wails quieted.

“This is my sanity,” Obike said, gesturing to the video.

Some 12 percent of about 2,000 graduate students that responded to the recent graduate student survey care for children under the age of 10 — a statistic that surprised Assistant Dean Jeffrey Franke.

“This was a larger number than we thought among our graduate student population,” Franke said. The survey, which was conducted in May, was the first time the graduate school had asked its students whether they have children, he said.

This university and the City of College Park have formed a partnership to turn a former Calvert Road school site into a daycare facility, which is expected to open in the spring or summer of 2019, university spokeswoman Jessica Jennings said.

“Childcare is not just something graduate students need,” said communication doctoral student Will Howell, who has a 10-month-old daughter. “It’s something that faculty need, it’s something that staff need — it’s something that even undergraduates need. It is insane that our university has not thought until 2018 that they need to provide some kind of childcare for the campus community.”

The Center for Young Children, a preschool and kindergarten laboratory school under the education college, is the closest thing to a childcare facility on the campus. Spots are in high demand — more than 100 applicants will be competing for 36 available spaces next August, said program administrative specialist Jennifer Haislip.

There are limited options for childcare available off of the campus — the College Park Nursery School on College Avenue, which provides half-day classes with the option of after-school care for children between the ages of 2 and 5.

Tuition for full-day care at the center — five days a week from 8:30 a.m. to 4:30 p.m. during the academic year — comes to $12,100 a year, according to the center’s website. This cost is about $4,000 less than the $16,144 minimum stipend afforded to graduate students for a nine-and-a-half month assistantship, according to the graduate school’s website.

Communication doctoral student Janna Söder said she and her wife work to arrange their schedules in such a way that they do not have to pay the costs of childcare for their two children.

“The thing about this salary is if you have to choose between this [assistantship] and childcare, it doesn’t make sense to keep the job,” she said. “Childcare in this area is so expensive that it’s better to stay at home than it is to have this.”

Franke said he used the quality of life survey results in a recent conversation about graduate students’ need for affordable housing and childcare options with Ken Ulman, the chief strategy officer for economic development for this university’s College Park Foundation. Franke hopes the discussion will clear the way for future talks about these options, graduate school spokeswoman Mary Carroll-Mason wrote in an email.

But Söder doesn’t think it’s the cost of childcare that is the problem.

“I don’t think childcare is over-priced,” she said. “I think we’re underpaid.”

Söder is in favor of the collective bargaining bill, which if passed, would allow graduate student workers to negotiate their wages with the graduate school. This bill will receive a hearing in the state Senate on Feb. 20.

When communication doctoral student Gareth Williams came to this university, he left a consulting job and took a “massive, massive pay cut.” While he and his wife have still been able to afford the mortgage for their house, pay the bills and put food on the table for them and their two daughters, “it’s been tight.”

“There have been a couple of times where I have felt terribly guilty about the amount of income I’ve lost being here, and my wife, bless her, has been very supportive in those moments,” he said.

The salary Williams’ wife makes as a civil rights attorney for the federal government supplements the stipend he earns through his assistantship. Söder calls her wife, a nurse, the “breadwinner” of the family, and said they would not be able to uphold their current standard of living off of her own stipend alone.

“If two graduate students had a kid, I don’t even know how they did it,” she said.

While she studies communication at this university, Obike’s husband attends Catholic University to obtain a second bachelor’s degree in graphic design. She said her stipend, combined with what her husband makes working part-time as an administrative assistant for a defense contracting business, is equivalent to one full-time paycheck that is “somewhat livable” for themselves and their two young sons.

“Everyone, to some extent, who is still studying finds themselves in a place where they have to be frugal,” Obike said. “But when you’re studying at the highest level and caring for two kids with a spouse who is also in school, the struggles are multiplied.”

Money grew especially tight last May when Obike missed the deadline to turn in the prospectus for her dissertation while she was pregnant with her youngest child and lost her assistantship with the graduate school. She was able to extend her employment benefits to August, and when she gave birth in July, healthcare insurance covered the costs.

About two weeks later, she was interviewing for jobs. The graduate school provides graduate assistants with six weeks of fully paid parental leave, according to its website.

“I realized that to keep my family financially stable and have health insurance and other benefits, I would need to jump right into the pool of graduate students looking for employment in other departments on campus,” she said. Obike was hired by the bursar’s office and now works from home as a graduate assistant, writing content that will appear on the office’s revamped website.

Journalism doctoral student April Newton said graduate school in America is not built for someone like her — a 45-year-old mother with two sons — but rather for someone “who is 24 and unencumbered by family.”

“The sort of tenor around grad school is that you get through it — that you sit your ass down and get through it and you just do it as fast as you can. And that kind of philosophy just doesn’t work well with having kids,” Söder said. “As soon as you have kids, everything slows down.”

This story has been updated to include that this university and the city have partnered to turn a former Calvert Road school site into a childcare facility that is set to open in 2019.