“We need this desperately”: grad teaching assistants could get collective bargaining rights 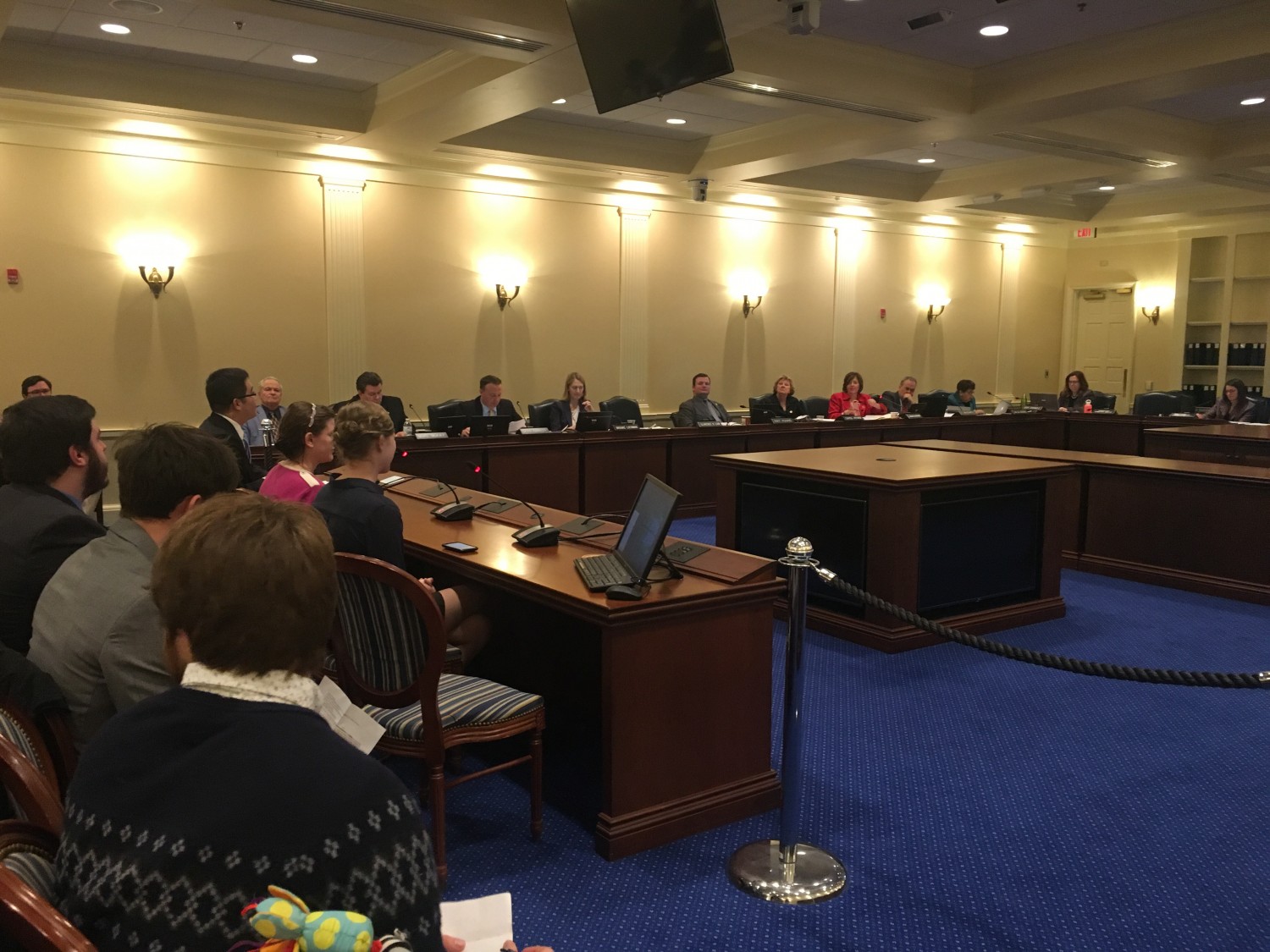 By spending more than two hours in the Annapolis State House Office Building on Tuesday, waiting for the chance to deliver his two-minute testimony to the state legislature’s House Appropriations Committee, University of Maryland doctoral student Casey Cavanagh said he was using “two of the most valuable resources for a graduate student” — time and money.

Ten of this university’s graduate students made the trip to the State House — two of them with babies in tow — to testify in support of a bill that would grant collective bargaining rights to graduate student workers at public four-year colleges and universities in Maryland. This would affect the University System of Maryland’s 12 institutions, as well as Morgan State University and St. Mary’s College of Maryland.

Some 40 other graduate students and faculty members from this university and others in the system provided favorable written testimony to the committee, said Graduate Assistant Advisory Committee President Will Howell. More than 800 graduate assistants at this university also signed a petition in support of collective bargaining rights, he said.

The Graduate Assistant Advisory Committee — which advocates for the employment concerns of graduate student workers — represents a little more than 4,000 graduate assistants at this university, according to the Office of Institutional Research, Planning and Assessment.

With collective bargaining rights, all graduate assistants within the system would be able to negotiate their wages and other terms of employment. In his testimony, Howell emphasized that these student workers have been fighting for these rights for the past 10 years.

In their testimonies, graduate students targeted the lack of affordable housing in the area surrounding College Park, low paychecks and poor mental health — issues that they discussed in a recently released quality of life survey from the graduate school.

Mechanical engineering doctoral student Roozbeh Bakhshi described his struggle to pay rent with the stipend he receives as a graduate assistant. As an international student from Iran, Bakhshi has an F-1 visa. This bars students from working off the campus for the first year they have it and limits their off-campus employment options in the years beyond that, according to U.S. Citizenship and Immigration Services. By the end of 2016, he had accrued more than $9,000 in credit card debt, a number he was able to cut in half, but only with his parents’ help.

“There are houses around College Park where 15-20 international students are living in a five-bedroom house so they can pay less rent,” he said in his testimony, adding that he knows two people who lived in these conditions. “This is simply unacceptable.”

At Graduate Hills and Graduate Gardens — the only designated graduate housing communities partnered with this university, according to the Department of Resident Life — the monthly rent starts at $1,247, according to the apartment complex’s website. As a 12-month graduate assistant, Bakhshi said in his testimony he receives $1,023 every other week.

In his testimony, Cavanagh also decried the lack of funding provided to graduate students. In December, Cavanagh, an atmospheric and oceanic sciences doctoral student, declined an invitation from the American Geophysical Union to talk at its conference in Austin, Texas, because his grant does not support travel reimbursements and he would have had to pay for the trip out of pocket.

As his undergraduate degree placed him about $60,000 in debt, this option was not financially feasible, he said.

“Graduate students currently have little say in how we’re compensated,” he said. “This bill will finally give us the right to actually have this conversation.”

But financial concerns are only part of the reason why graduate students are fighting for collective bargaining rights, said Graduate Student Government Chief of Staff Caden Fabbi.

“It’s really about building solidarity and having a seat at the negotiating table when your employer is taking advantage of you,” he said.

Graduate School Interim Dean Steve Fetter submitted written testimony to the House Appropriations Committee in opposition to the bill, writing that it would “fundamentally change the relationship between faculty and students from mentor and mentee to employer and employee.” Fetter also argued that research assistantships would not be easily adapted to collective bargaining, writing that it’s difficult to parse apart the hours students dedicate to research for a faculty member versus for their dissertation, he wrote.

GSG Financial Affairs Vice President Devin Scott, who has taught multiple undergraduate communication courses for undergraduate students and does administrative work for the Oral Communications program, said this is an issue that affects neither teaching nor administrative assistants. He added that running these commitments does not help him with his dissertation work.

[Read more: UMD GSG says it will continue to fight for collective bargaining despite bill failure]

Under meet-and-confer, the current infrastructure that governs the relationship between graduate student employees and the university administration, students can raise employment concerns with the graduate school without any structured agreement. This process does not work at this university, GAAC board member Morgan Hess said. Collective bargaining rights would formalize negotiations between the graduate school and graduate student employees and enable these students to unionize, she added.

System Senior Vice Chancellor for Academic and Student Affairs Joann Boughman testified against the bill, saying, “We do our best to involve these students in the process. As you have heard, it doesn’t always work terribly well, but our position is that the collective bargaining process would not necessarily improve the situation.”

Communication doctoral student Winnie Obike, who drove from Hyattsville to Annapolis with her 2-year-old son to testify, had to leave before the bill received a hearing, as her baby was getting restless and needed a nap. Had she been able to testify, Obike would have described the grievance procedure graduate students must go through to raise a complaint against their departments — a process that she said has “made it painfully clear to me that we need external enforcement mechanisms.”

“Maybe that’s a collectively bargained contract with clear process, or maybe it’s just being able to take issues to the State Higher Education Labor Relations Board,” she said. “Either way, we need this bill.”