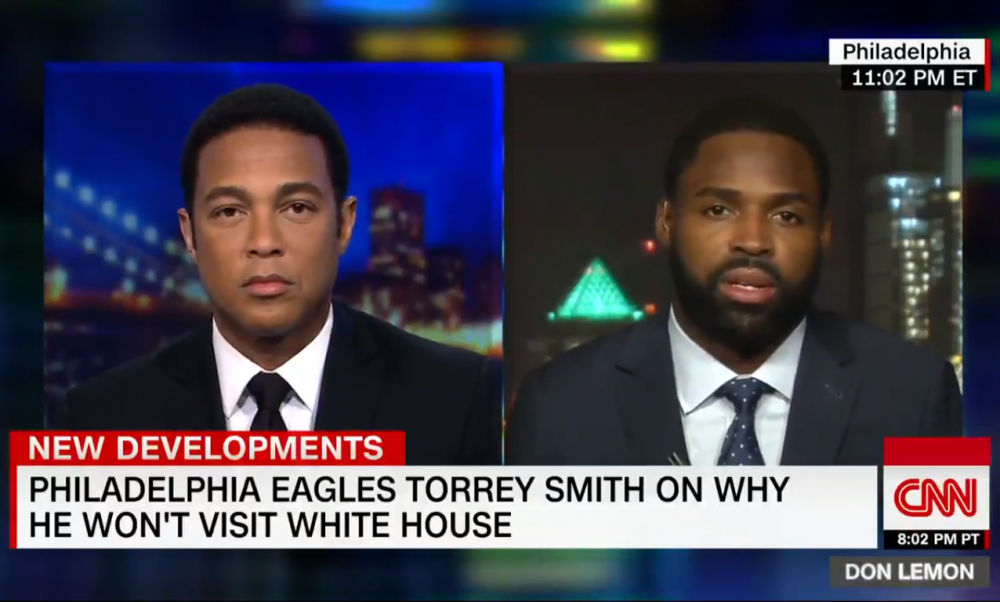 For the second time in his NFL career, Torrey Smith is a world champion. The former Maryland wide receiver caught five passes for 49 yards to help the Philadelphia Eagles top the New England Patriots 41-33 in Sunday’s Super Bowl.

It’s customary for the team that wins the big game to visit the White House afterward. But for the second straight year, a few of the NFL’s champs have decided to skip the trip — and Smith is one of them.

Last week, Smith — who’s been an outspoken critic of President Trump — told reporters he didn’t plan on going to the White House if the Eagles won the game. Now that Philly picked up the victory, he’s stayed true to his word. He appeared on CNN Tonight on Tuesday to explain why:

Smith has had plenty of political disagreements with Trump, but he stressed to CNN’s Don Lemon that his decision to skip the White House visit went beyond politics.

“If I told you that I was invited to a party by an individual that I believe is sexist or has no respect for women, or I told you that this individual has said offensive things towards many minority groups, and I don’t feel comfortable about it … you would understand why I wouldn’t want to go to that party,” Smith said. “Why is it any different when this person has the title ‘president of the United States?'”

Smith isn’t the only Eagle to make this decision. Defensive end Chris Long and cornerback Malcolm Jenkins have also chosen to skip the White House visit, for reasons that pretty much align with Smith.

During the 2016 NFL season, then-49ers quarterback Colin Kaepernick took a knee when the national anthem was played before games to draw attention to racism and police brutality in the United States. While he went unsigned for the entirety of the 2017 season, players across the league assumed his mantle, protesting in different ways throughout the year.

Smith, Jenkins and Long had their own form of protest — during the anthem before some games, Smith and Jenkins would hold their fists in the air, a la Tommie Smith and John Carlos, while Long would put his hand on Jenkins’ shoulder as a sign of solidarity.

Critics of these protests argue they disrespect everything from the anthem and the flag to the police and the military. Smith has said that the protests are not of the anthem itself — he told reporters last week that “it’s not an anthem protest, it’s a protest during the anthem” — and that they’re an important tool in the fight against racism. But that explanation hasn’t satisfied many NFL fans, including the one in the Oval Office.

During a rally in Alabama in September, Trump said that when a player protests during the anthem, the team’s owner should “get that son of a bitch off the field.” This provoked a fierce blowback from many players, including Smith, who wrote in a since-deleted tweet that Trump was the “most divisive person in this entire country.”

Smith wasn’t as vocal about his beliefs during his time with Maryland, but he was still aware of social issues. He’s emphasized the importance of education for players who don’t want to speak out to learn about what’s going on in the world, and he’s lauded this university’s African-American studies and criminology and criminal justice departments for the work they do.

As a pro, Smith hasn’t limited his activism to protests. Armed with his degree in criminology and criminal justice, he’s pushed for criminal justice reform in Pennsylvania, alongside Jenkins and Long.

The three of them are members of the Players Coalition, a group of players that’s pushed for the NFL to fight for social justice in the wake of Kaepernick’s protest. In November, the league agreed to pay about $90 million over several years to “social causes deemed important by the players,” according to The Washington Post.

So while it may not make some fans happy, Smith will stick to his word and skip the White House visit. The complaints are analogous to the ones he faced because of the protests — Lemon, playing devil’s advocate, noted that “people would say that you should respect the office and go … even if you don’t respect the person” — but Smith remains unfazed.

“I feel like oftentimes … we hold our athletes and entertainers to higher standards than we’re holding the president of the United States,” he said on CNN. “For me, it’s just about doing the right thing.”