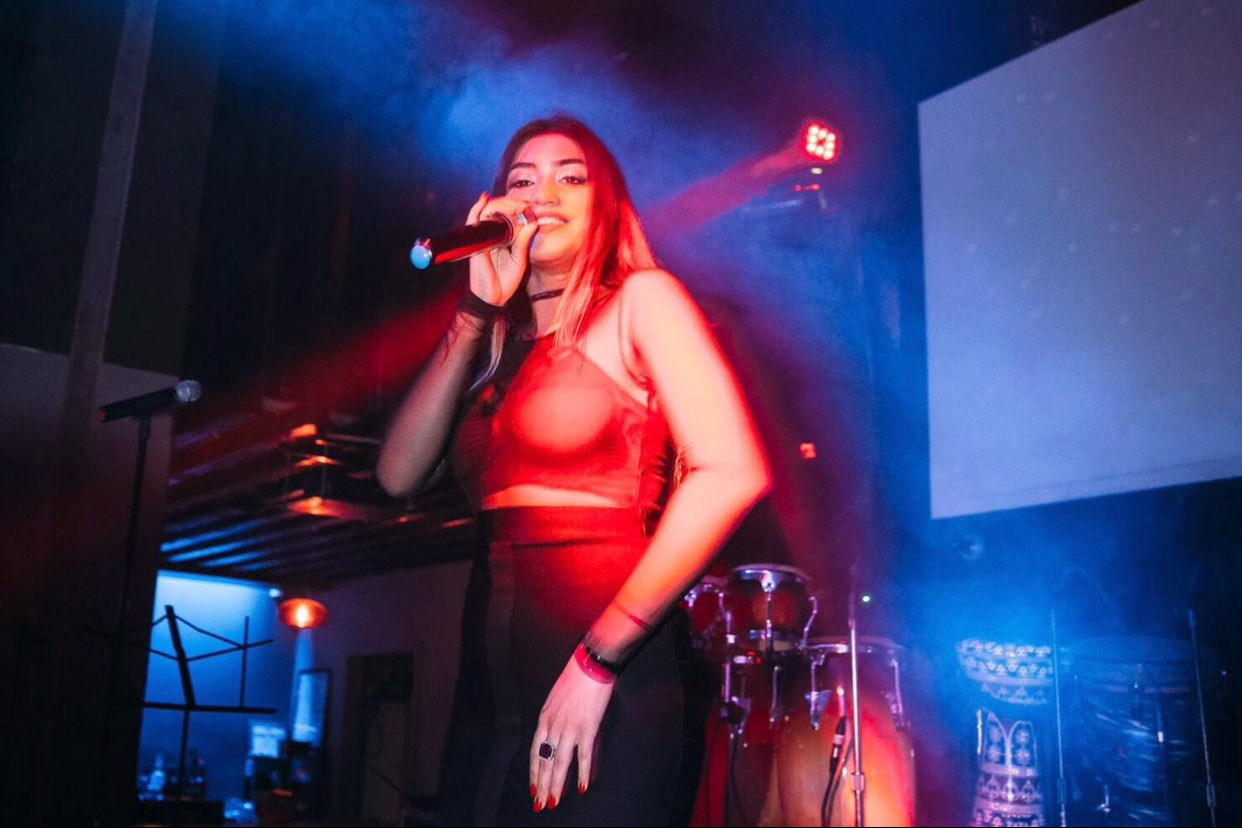 Sahara Mokhtari has been singing since she was three years old. Now, at age 19, she has jumpstarted her music career with the single “Quicksand” and a music video to match, all while studying biology, being involved in her community and staying social.

Mokhtari, whose stage name is Sahara, went from elementary school choir to middle school honors chorus to posting covers on YouTube. She is now putting out professionally produced work, but she knows she has these opportunities because of the support system around her.

“My dad is actually my manager, he manages all my music but I do have different managers like a booking manager, social media manager, so it’s really like a group effort,” the singer said. “It’s really nice having my parents having my back and supporting me because without them I wouldn’t really be able to do it all. They encourage me and push me to keep going.”

Her family’s support is just the tip of the iceberg. Mokhtari’s friends see a lot of potential in her and recognize her star power.

“She’s probably like the only person I could actually see making it,” said junior economics major Marisa Madaras. “I’m always skeptical when someone is pursuing a singing career or acting career because it’s so hard to make it in a world like that, but she is like the one person who has the charisma and social stamina and talent to actually make it.”

Mokhtari is more than just a singer; she’s a biology major on the pre-med track and the community service vice president for her sorority, Kappa Delta. But music is still her dream.

“I’ve always loved the pre-med track, like medicine and becoming a doctor,” Mohktari said. “But I think right now is my only chance to become a singer and pursue a career in singing so I want to run with that and see where it takes me.”

Though her friends support her musical dreams, they’re confident she’ll be successful in any field.

“Regardless of what Sahara decides to do, she will most definitely be successful,” Ken Johnson, a sophomore enrolled in letters and sciences, said. “She is the type of person that can accomplish whatever she sets her mind towards.”

Madaras had a similar thought, noting even if Mokhtari’s music career doesn’t take off “she will somehow have a role that will be uplifting to the people around her,” which shines through the musician’s love of community service.

She brought three of the women from the organization on to get new clothes and have their new hair and makeup debuted on TV.

“I think a big part of my aspirations with singing is giving back and helping other people that need it,” Mokhtari said. “I know that I have been so fortunate to be surrounded by people that support me and push me to do better. I want to give that to someone who needs it as well, because I know how important that is especially when you want to follow your dreams.”

Carly Haynes, a sophomore journalism major, has been friends with Mokhtari since high school and thinks her personality is a big part of her appeal.

“I think that she’s just genuinely well-rounded as a person,” Haynes said. “I think with a lot of singers they have the talent and the personality follows suit, but with her it’s like she cares so much about the community. … She has a genuine care for helping other people.”

Haynes once heard a snippet of “Quicksand” and thought it was Dua Lipa. With Mokhtari’s budding career, it will be cool “to turn on the radio and hear her songs … her name will definitely be out there.”

Mokhtari is serious about her music career; she traveled to Georgia to record “Quicksand” and to Los Angeles to shoot the music video. She and her production team are starting to meet with various labels and producers to take more steps to fame.

“I find Sahara’s budding music career to be impressive, yet not surprising,” Johnson said. “She has adopted an extremely professional attitude towards her singing, one that will undoubtedly propel her to the top of the industry.”

As for the responses to her music, Mokhtari said she’s gotten overwhelmingly positive feedback on “Quicksand,” but there are always people who are negative. She doesn’t sing for the reaction of others, though.

“There are always those comments that I would read through and I would see them and obviously they’re not always very nice,” Mokhtari said. “But I think everyone has their own opinion and I would never let that get in my way because I’m a true believer in doing whatever makes you happy and always pushing to do whatever you want to do no matter what anyone else says.”