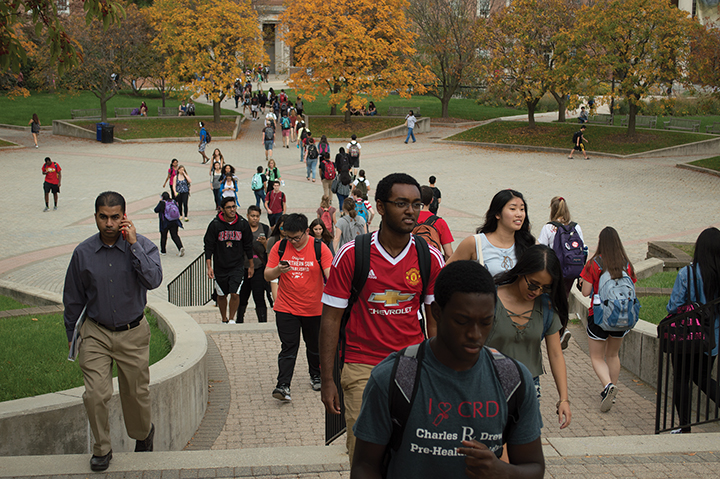 Black student enrollment at the University of Maryland and many other flagship institutions is not reflective of their state’s population, analysts found in a report released Monday.

“You can have diversity, you can have what we have, which is an individualized and holistic evaluation, because between the number of people and the person admitted, there’s something called an admissions process,” university President Wallace Loh said. “So, if the implication is that well, the right number is somewhere near 36 percent — if I were to say that publicly, I would be sued.

“And you know, there’s a whole series of Supreme Court cases on this issue. You can take race into account as one factor of many factors. But the moment you have a rate that you enforce, a target — not even a quota — bam, unconstitutional,” Loh said.

Recruiting students of color and those from underserved backgrounds is one of this university’s “biggest priorities in the admissions office,” Director of Undergraduate Admissions Shannon Gundy wrote in an email.

In a statement, University of Maryland spokeswoman Katie Lawson said the cultivation of a diverse campus was a guiding principle for this university.

“We are extremely proud to be one of the top ten most diverse flagship universities in the country,” Lawson wrote.

Trey Huff, vice president of this university’s NAACP chapter, said the disparity between black high school graduates and black students enrolled at this university could be attributed to a lack of financial aid options for black families who are above the poverty line, but can’t afford the entire cost of their child’s graduation.

Huff also cited the murder of 2nd Lt. Richard Collins, the black Bowie State University student killed on this campus in May, as a reason some black high school students might be opting to attend different universities. While students of color represented 46 percent of freshman undergraduate students at this university in 2017 according to university data, 10.8 percent identified as black — the lowest percentage since at least fall 2010.

[Read more: ONLY ONE IN THE ROOM]

Many black freshmen Huff spoke to during orientation activities last summer expressed concerns about Collins’ death, and whether or not the campus was safe for black students, he said.

“It gives more black students a reason to go to HBCUs and not predominantly white institutions,” said Huff, who is a senior biochemistry major. “It’s confirming the fears they have. “

Kayla Stokes, a black junior American studies major and transfer student, said black student representation on this campus could be a lot better. She said she would’ve looked at this university more closely if it had a stronger black population.

“I feel like a lot of times people of color aren’t given opportunities to succeed,” Stokes said. “Or the school may not know how to go about helping them.”