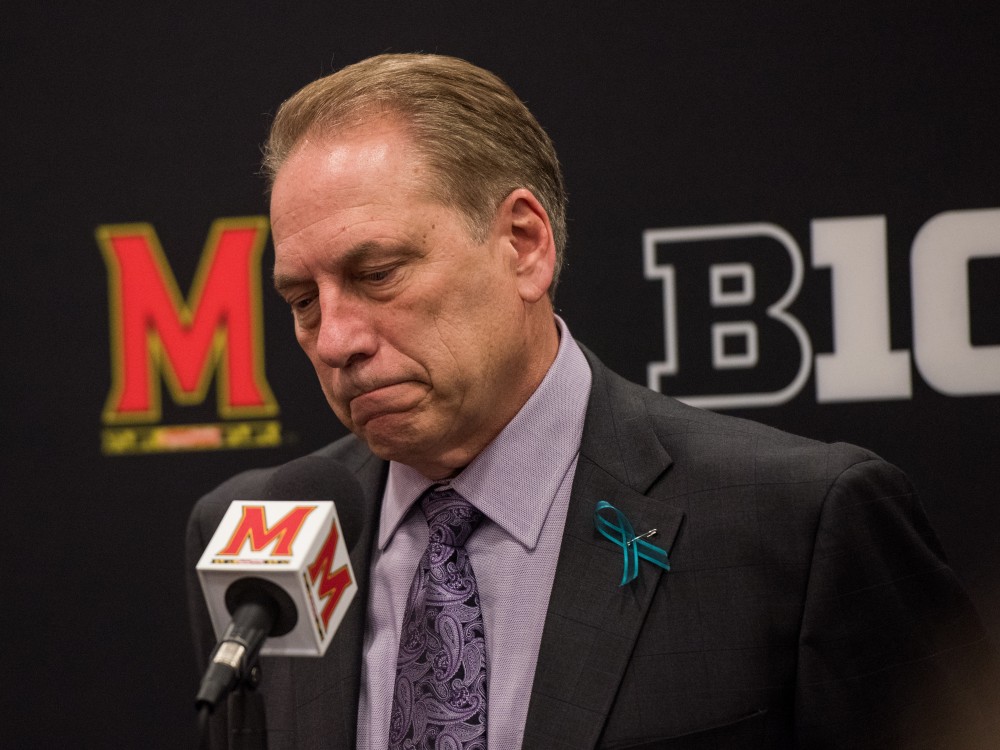 It was his second postgame press conference focused on that issue after ESPN’s Outside the Lines reported Friday that in addition to the numerous reports of abuse against Michigan State doctor Larry Nassar that were ignored, the Education Department’s Office for Civil Rights found in 2015 that the university violated “several procedural aspects of the Title IX gender discrimination law” and that a “sexually hostile environment existed for and affected numerous students and staff on campus.”

After No. 6 Michigan State’s 74-68 win over Maryland, Tom Izzo was grilled with questions about alleged sexual assault within his program. pic.twitter.com/jAQdlcMpaG

“Well, as I said before, we’ll cooperate with any investigation and always have,” said Izzo, who wore a teal ribbon showing support for sexual abuse victims pinned on his lapel Sunday. “We’ve done it before and we’ll do it moving forward. It’s about all I’m going to say on it.”

Included in the reports were a pair of allegations against former Spartans assistant coach Travis Walton. In 2010, Walton, then with the program, was accused of punching a female student in the face at a bar and pleaded not guilty to misdemeanor assault and battery before the charges were dismissed.

Then-athletic director Mark Hollis, who announced his retirement on Jan. 26 of this year in the wake of the Nassar scandal, and associate athletic director Alan Haller met with the woman’s parents several weeks later, according to a university document Outside the Lines obtained, and said the incident had been discussed “with the basketball team.”

The university document, a letter from a school sexual assault counselor sent to campus officials, reportedly said no players “were reprimanded in any way,” and that Walton was fired. But when Outside the Lines spoke to him, Walton said he didn’t remember “anything from that.”

On Sunday, Izzo’s memory of the event was similarly sparse.

“To be honest with you, I don’t remember why he left,” Izzo said. “I know he went to Europe to play.”

Izzo also expressed sympathy for the Nassar victims, who were in the national spotlight over the past two weeks as they spoke publicly at Nassar’s sentencing, and the 23rd-year head coach hoped his program could be a “real part of the healing process.”

“It’s been hard to focus in on basketball because when I do, I feel guilty,” Izzo said. “I feel guilty talking about anything else [than] those women that I watched.”