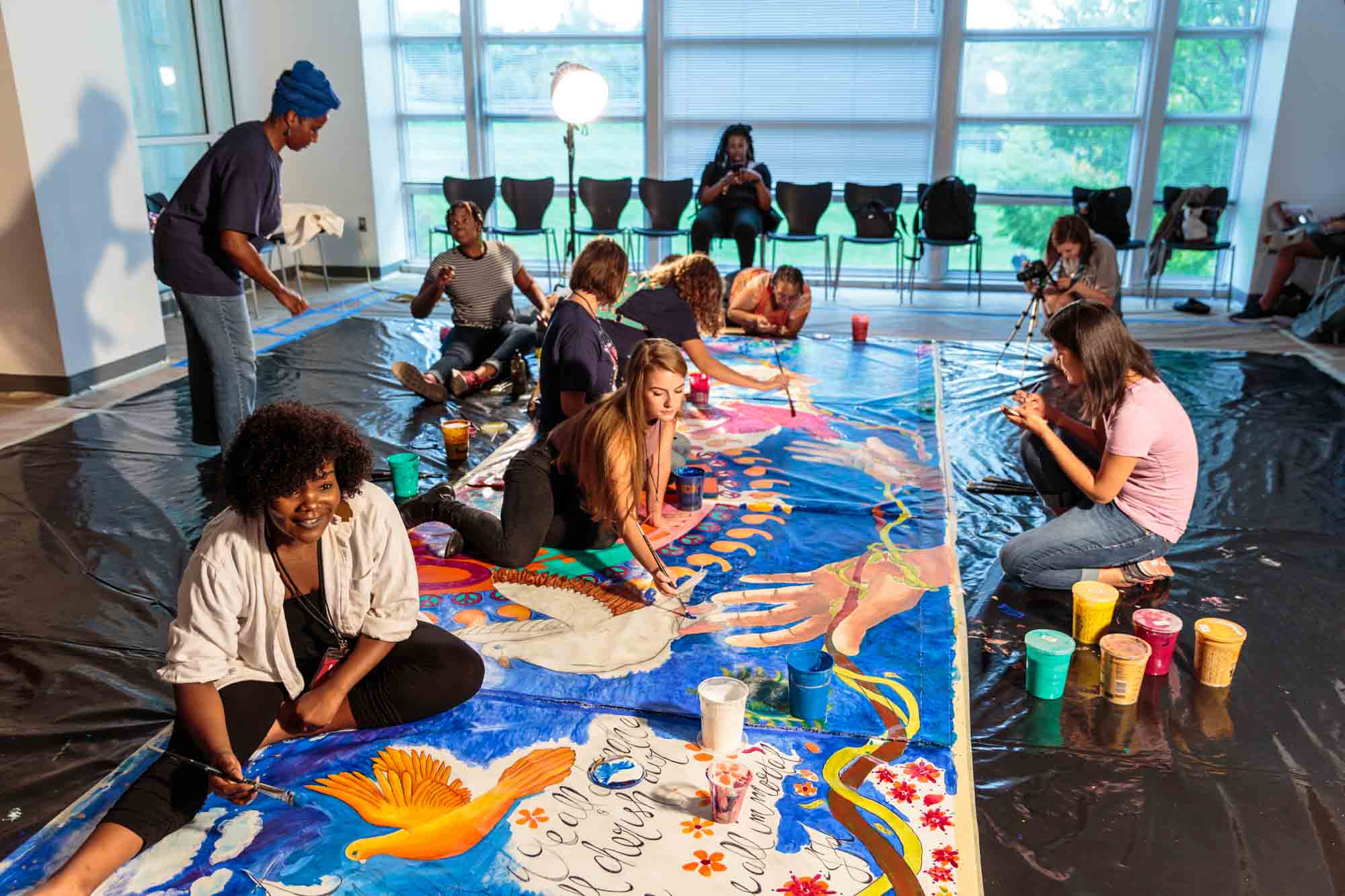 A mural designed by University of Maryland and Bowie State University students is now on display at the Maryland State House in Annapolis.

The painting, often called the “Unity Mural,” was completed in the fall. It was meant to represent peace, justice and hope in the wake of the death of 2nd Lt. Richard Collins, who was fatally stabbed on this campus in May.

After its completion and display at NextNOW Fest in September, the mural was stored in a studio while the finishing touches were applied, said Jennifer White-Johnson, a professor of visual communication and digital media arts at Bowie State who was instrumental in the mural’s creation.

“We want it to be visible, we don’t want it to be put away and never seen again,” said Erica Bondarev Rapach, The Clarice Smith Performing Arts Center associate executive director and one of the leaders of the project.

Now that the mural is ready for public display, it will travel to different temporary locations throughout the state. The first stop is the Prince George’s Wing of the State House in Annapolis, Bondarev Rapach said.

“The fact that it is at the state house is super amazing because that means that the state of Maryland is supporting what we envisioned and what our goal was,” White-Johnson said.

The art is expected to remain in its position until the end of the legislative session in mid-April, Bondarev Rapach said, adding that she thinks its message of hope and unity has an important place in the State House.

“The mural itself is sort of expressing positivity in the midst of the hate and injustice that we are seeing both nationally and in our own communities,” she said. “There’s a symbolism in putting that in a place where legislation is happening to remind legislators that their communities are committed to hope and justice and peace.”

Gina Lewis, a professor in Bowie State’s fine and performing arts department, agreed with Bondarev Rapach’s assessment, adding that she thinks the mural is particularly important in the currently charged social climate.

“The concept of white supremacy and what that means, the ugliness of it, is coming back,” she said. “I think that at this particular point in time, it’s extremely important that we as a community express how we feel about protecting what we know as our way of life.”

Del. Angela Angel (D-Prince George’s) said that the message behind the unity mural is not lost on her or her fellow delegates, especially when considered in the context of the State House.

“It’s dripping with history, and that history, to be honest, is not really beneficial to me as a black woman,” Angel said of the Annapolis State House, the oldest still in legislative use in the country.

“For most of the time that it was in operation, I was not viewed as someone of value,” she added. “There are even times today when I feel that I am not viewed and recognized for the value that I have. But we fight on, and the mural is a reminder that this is one of the ways that we fight on.”

Angel said that she believes art can be used as a powerful statement in places of government in many different ways.

“Here in the House you have art from all over, but I always try to push art that is reflective or done by people of color,” she said. “It’s another way to ensure that we are represented and that our voices are heard.”

Collins’ death, which sparked the creation of the mural, was heavily influential in the drafting of hate bias incident legislation that Angel is currently working on, she said. The bill was developed with members of ProtectUMD, a coalition of 25 student groups that advocates for marginalized groups on this campus. It would institute mandatory diversity training and reporting mechanisms for hate bias incidents on the campuses of all public universities in this state.

Overall, Angel said, the mural’s place in the State House has had a profound impact on her and her colleagues, who see it every day as they head to work.

“It’s definitely something that makes you pause and think,” she said. “It’s a reminder that we still have work to do.”